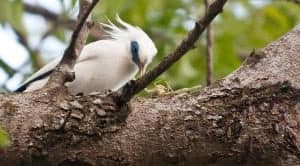 Bali myna bird, also known as Jalak Bali and Bali Starling, the name myna is from the 18th Century, from the Hindi word ‘Mainā’.

Then, now it transforms into Myna, the Bali myna bird is a bird that’s mean it’s an intoxicating, delightful and joyful type of bird.

They are now found only in one type of special forest on the west of the island. Luckily all of them are under protected area,which is the Bali Barat national park.

Bali myna bird or latin name Leucopsar Rothschildi is a type of a medium-sized warbler, with a length of roughly 28cm. Bali Myna has special characteristics. They had white hair on his entire body except for the tail and its wings are black.

In addition, this birds normally display an oscillating motion, normally followed by small talking noises. The Bali myna performs sounds when flying off mirroring like a kind of shriek, and usually produce hissing noise as a wake-up sound. The sound of the Bali myna is made of many types of intense, bursting noises, mixed with whistling, chuckling, and shrieking, and is done by both genders.

Meanwhile, the cheeks that are not covered with feathers, has bright blue color and its grayish feet. Males and females shares similar trait. They may have a brown pigment to the feathers on the back, and a dark brown hue on the wings. but the head is often longer in males. Young birds tend to have a much shorter head.

Bali myna bird was first discovered in 1910. The scientific name for the Bali myna is named after a British animal expert, Walter Rothschild, the first person to describe this species to the world’s knowledge group in 1913.

Due to the beautiful and elegant appearance, Bali myna becomes one of the birds that were most in demand by collectors and watchers of birds. Illegal hunting, loss of forest habitat for the bird area is causing the bird population to rapidly shrinking and threatened them with extinction in a short time. To prevent this from happening, most zoos around the world has run a breeding program for Bali myna.

Similar to another various type of myna they have a combined nutritional of fruit, seeds plant and small insects. Insects are mainly needed for young, baby bird myna due to of the high energy content. They usually live in large flocks, although during the breeding season pairs tend to act aggressively towards one another. When courting, behavior displayed includes shrieking and head bobbing movements.

The birds normally stay in big groups. However, when the breeding season starts then the pairs tend to behave much more maniacally towards another bird. When mating, the motion displayed includes shrieking and head bobbing movements.

While in the breeding periods usually during the rainy season in Bali, males attract females by emanating sound loudly and moving up and down. The birds nest in tree holes, with the female stationed there laying and producing three eggs. Both males and females get food to the tree nest for chicks after hatching.

They breed in places in which there are massive volumes of trees available so that the bird can find tree holes to nest in with. They sometimes nest in tree branches.

In its native habitat, the bird is low profile, masking its existence under the tree tops for cover and normally getting to the ground for drinking or to gathering materials for nesting. Additionally, this habits may come as an adaptation to avoid predators when they are out in the field.

The Bali myna bird sometimes exists in flocks during their younger phase to easily find a food source and looking out for predators.

The Bali Myna bird is spread and endemic to the island of Bali, additionally it is the island’s sole surviving endemic species. This near extinct bird was known in 1920 and it is included as one of the world’s endangered birds. In addition, this extinction threat has been going on for several years

The trading even in captive-bred specimens is harshly controlled and the species is normally not accessible easily to normal individuals. In addition, expert aviculturists may resort to captive breeding methods, enabling them to lawfully preserve this birds. The total volume of birds available in their native habitat is not counted.

At least 2,000 birds are thought to be kept in cages lawfully. The volume of captured birds sold on the black market is approximate twice the number of lawfully afforded birds in the cage breeding programs.

Endemic to Indonesia, the Bali myna bird can be detected in the jungle of the west part of the island of Bali. The Birds are also the unique species endemic in Bali and in 1992 was named the fauna mascot of Bali Province. The existence of this unique animals is protected by current regulations.

West Bali National Park is a paradise for bird watchers or bird lovers. With the height of over 40 meters from the surface ground, Bali Park can easily capture the movements of birds. And Bali myna began to appear.

West Bali National Park is an ideal forest and native habitat for Bali starling. Seasonal forest and mangrove forests with abundant food resources. A data-set in Bali West National Park in 2005 showed only three Bali myna bird who live in nature. This data is forcing conservationist efforts for continued preservation. One of them is with the release of Bali myna confiscated from citizens.

Slowly but surely, Bali myna bird can start growing population again in the wild. However, the monitoring process remains to be seen. For this reason, nestbox or artificial nests installed at some point in the tree. The goal is to help the Bali myna bird that has been released in the wild to find nesting and do breeding safely and slowly until at a later date where they could form new natural nests.

Despite conservation efforts that have been made, the threat for this bird is still looming. Among these are illegal poaching and habitat loss due to deforestation. Not to mention the threat of predators such as squirrels, lizards, eagles or snakes. Plus, dependence with other animals and nest layout that are too open make it so easy for predators to stolen their eggs.

A harmonious synergy between the West Bali National Park, local governments, communities and associations breeder of Bali myna for one. Armed with a breeder permit from Conservation and Natural Resources (BKSDA) in Bali, then this bird breeder group of Bali myna has successfully bred the birds in the captivity.

Each breeding results were given certificates by the official body of BKSDA. It is effective ways to prevent illegal trade.

Jimbung village is now known as Bali myna bird production centers. Opportunities multiply for Bali myna preservation ever since the government legalized the Bali myna breeding program in captivity. And residents of the village Jimbung catch this as a business opportunity.

Since the start of promising businesses of Myna breeding, the residents known as the Village Myna slowly help preserve the white myna and Bali starling. Thousands of Bali myna have been produced since seven years ago.

In fact, the Preservation is directly comparable to the welfare of its owner. A pair of Bali myna bird and their permits and certificates valued at Rp 12 million. Then for the average young birds estimated to cost Rp 4 million to Rp 6 million.

Bali starling demand as pets that are legal is now fulfilled. Conservation eventually provides hope, to preserve the remaining Bali starling. Bali starling conservation programs now go hand in hand with keeping public awareness, to impose a customary rule in which prohibits the arrest of Bali Myna. If they violated it, then there will be traditional sanctions imposed towards the person who committed it.

The existence of this breeding program proved of a lot of good benefits for the people there. Which suppress the illegal hunting activity and the subsequent reduction of illegal trade of Bali starling in the black market, thus can meet the demand for Bali starling as a pet that is legal, and of course keeping the preservation movement.

Public awareness, the rule of law and long-term monitoring system become a necessity for myna survival. Conservation effort for the breeder, with 10 percent of the birds released into the wild, can be used as a model for the handling of other threatened species.

It is very importance for Bali starling presence in nature to makes the balance of nature in the forest return to normal equilibrium. So the chain of the ecosystem food chain is preserved. One animal cannot co-exist without the other animals. This natural existence must be kept in place so it can be in sync with the rapid growth of the civilians living near their habitat.