Merak Bird often called as peafowl. Peafowls are very large, colourful birds. They are famous for their feathers which can raise upwards. The feathers reveal golden pattern like eyes. There are two species of peafowls in the world, the Indian peafowl (Pavo cristatus) and the Green peafowl (Pavo muticus).

Here is the classification of the peafowl. 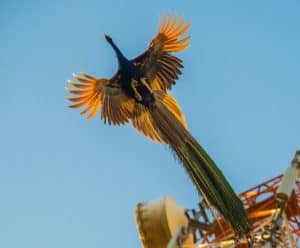 The peafowls have been long admired since the Roman Empire. They were bred for decorative reasons and food.

Additionally, they were also consumed by the people in Medieval Europe too. By the 1600th Century, turkeys became popular and peafowls were no longer desired for food.

Therefore, they continue to thrive in the open nature.

As for the Green peafowls they still live wildly in the tropical and subtropical forests with nearby source of water. They prefer to live as far away from noisy human activities.

Male and female Merak birds have quite a number of differences in terms of their appearance. Below is a table showing a brief summary of those differences.

The Merak birds can fly by using their wings. People do not often see them flying because there are not a lot of them in nature anymore. When a Merak bird flies in the open sky, it almost resembles a phoenix.

In a way, the male Merak bird looks more appealing than the female. Its neck has a glossy black scales. The forehead is shiny and blue. The skin around the eyes is yellow and so are the cheeks. Eyes are dark brown.

The wings are dominant in brownish black. Feathers on train are decorated with eye spot. It is very big with very long legs. Although, its attractive green colour intends to attract female Merak birds, it also makes it an easy target for predator.

Female Merak bird does not have a striking green colour. It has a very dull greyish undertone. No train of feathers but the tail is black and brown with a bit of blue. The dullness of its colour plays a role in helping it camouflage with the surrounding. Predators are unable to spot them easily. Thus, they can raise their young ones safely. 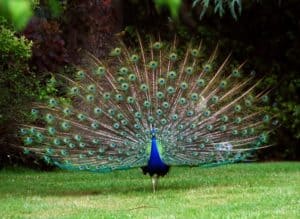 Male Merak birds are polygamous. In other words, they can be with more than one female Merak. During breeding season, a male Merak bird shows off his train of feathers. He opens them like a fan, showing the marvellous eyes on each one of the feather. He walks around the female Merak a few times and bow. While doing that, he releases a loud noise similar to a Rooster.

The female Merak birds can only produce three or six eggs a couple of times within a year. Their nests are made on the ground with grass.

They must be in a place where they can see their surroundings. It takes approximately 28 days to incubate the eggs. The colour of their eggs is pale yellow.

A peaceful environment would increase the number of eggs they can produce. A disruptive and noisy environment would cause the birds to leave their nests. Without any birds, the eggs cannot hatch. The male Merak birds play no part in raising their children. They can attract predators as their colours are very easy to see.

The feathers of a male Merak bird will eventually fall out when breeding season is over. Around 100 to 200 hundred feathers can fall.

Once hatched from the eggs, peachicks weigh up to 100 grams. They are born with their bodies already covered in feathers. It does not take long for them to learn how to fly. They must know how to because they can avoid predators by flying up to trees with their mothers.

Female Merak birds teach their young ones how to make sounds and scavenger for food. It takes around 3 years for a male peachick to grow a train. Over time, it will grow longer.

Since Merak birds are omnivores, they can eat plants, seeds or small reptile creatures. Their diet also consists grains, vegetables, fruits, small lizards. There needs to be enough protein intake to avoid cannibalism. There must always be a fresh source of clean water for them to drink.

Merak birds like to sit on trees with adequate amount of leaves. They roam around the forests and large open green areas. Merak birds are able to live areas with bamboo trees, farmlands or bushlands. Moreover, these birds spend their time on trees, which is also another way for them to avoid predators nearby.

Merak birds are not immune to illnesses. Bad hygiene, poor environment or a stroke of bad luck could make them sick. Prolonged illness or aggressive diseases may cause death. Here are some diseases and illnesses that could affect peafowls:

Due to the beauty of Merak birds, Indonesia has a dance inspired by them. Raden Tjetjep Somantri invented it in the 1950 in Sunda, Western part of Java. The dancers wear costumes and fabrics with the patterns of their feathers.

Then, so they move gracefully, in the same way as a male Merak bird when he shows off his long train of feathers. The dance implements the movements and the life of the Merak birds. The performance has been appreciated both locally and internationally.

Feathers of a male Merak bird that fall when breeding season is over are very useful in Indonesia. A mask in a traditional dance of Reog Ponorogo needs those feathers. The mask is called Singo Barong, a lion with the Merak bird’s feathers as crown. 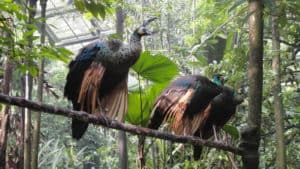 There is only one sanctuary for Merak birds in Indonesia. This place is in Tawangrejo village, Madiun city in the Western part of East Java. The government does not run this place. Surat Wiyoto is the man who owns this place.

The sanctuary is on a high altitude, surrounded with many teak trees. In 1999 while looking for woods, Wiyoto found four large eggs.

He had a good feeling about the eggs so he let his chickens to incubate them.

Then, 15 days later, 2 male and female merak birds were born. He took good care of them and feed them with his own money.

However, in 2011, the board members of Conservation and Natural Resources in Indonesia wanted to collect the birds because they were endangered species. Wiyoto did not want to give them up so he showed papers from a vet to the board members.

Eventually the members let him keep them because the Merak birds continued to thrive under his care. Despite the avian flu that killed some of the birds, many of them continue to be alive. Wiyoto still takes care of them as he wants their population to grow. 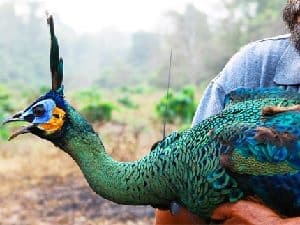 The IUCN Red List of Threatened Species puts them in the Endangered status. As of now, some species in particular areas are declining in numbers.

Hunting for personal pride or for food contribute to the rate of the extinction. In addition, the increasing number of deforestation for homes and industrial reasons, Merak birds also lose their natural habitat.

Other than Surat Wiyoto’s sanctuary, Merak birds are also in Taman Nasional Baluran and Taman Nasional Alas Purwo. They are National Parks in East Java.

Consequently, Merak birds are in the same fate as the Sumatran tigers and the Endangered Sumatran elephants. Lack of attention from both the government and the people may eventually lead them to their demise. Therefore, we must ensure that these endangered creatures can thrive in a safe environment. As we live alongside nature, we try our best to take good care of everything that lives in it.

Top 15 Indonesian Writers and Their Works