However, Indonesia has many types of foods that are delicious if it is used as dessert. Here, we want to share some delicious and refreshing Indonesian specialties. These are the following famous dessert in Indonesia 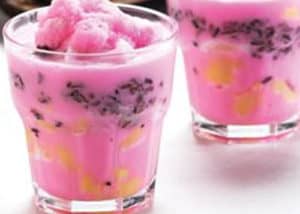 Es Doger or maybe you would say Doger ice is a cold drink based on coconut milk and pink and used as a dessert. Es Doger is a typical Bandung drink, West Java. The taste of this dessert is obviously fresh and sweet.

The ingredients used are several types of tape and also fresh fruits. This doger ice is very easy to make so it can be served as dessert whenever you want. You can use an easy ice cream recipe to make this doger ice.

Cendol is an Indonesian drink made from rice flour, served with grated ice and liquid brown sugar and coconut milk. The taste of this drink is sweet and savory. in the Sunda region this drink is known as cendol while in Central Java it is known as es dawet.

The rice flour is processed with green coloring and printed through a special sieve, so that it forms granules. The dyes used initially are natural dyes from pandan leaves, but currently artificial food coloring has been used. This drink is very fresh and delicious to be used as a dessert or dessert.

Pisang ijo is a typical food in South Sulawesi, especially in the city of Makassar. This food is made from the main ingredient of bananas wrapped in green flour mixture. How to cook it is by steaming in the cormorant. The dough is made from flour, water, and green coloring made from a mixture of water with suji or pandan leaves.

This ice menu is very good for dessert since the sweet taste. You can get this dessert menu in some famous restaurants or cafes in Indonesia.

Es teler is an original drink from Central Java, Indonesia. The origin or history turns out to be from Sukoharjo Regency. In 1957, this drink appeared because it was discovered by Hj. Husjem Darmo Putro (Mother of Tukiman Darmowijono), a resident of Juron village, Nguter District, Sukoharjo Regency, Central Java.

Es Kelapa Muda was included in the 50 most delicious drinks in the world CNN version on December 9, 2011 which was ranked 19th. Evidently, many people like this menu as desert, right?

The mixed fruit ice dessert is one of the typical Indonesian drinks that are made by mixing various types of ingredients in sweet syrup. The ingredients used as basic ingredients usually taste sweet or sour. Mixed ice can be found in various regions in Indonesia with different flavors and ingredients. Therefore, the origin area of mixed ice is difficult to determine.

This one dish is usually easy to find and many sell when the fasting month. This banana compote contains cabbage, bananas, sweet potatoes cut into pieces and then the sauce consists of a mixture of coconut milk and brown sugar and pandan leaves that give a pleasant aroma. This dish is very tasty when it’s warm but if you add ice it feels great.

Do not hesitate to try this dessert because it feels very sweet. This is the most famous desert in Indonesia in the month of Ramadhan.

During a visit to Palembang, besides eating a portion of Pempek that was previously fried on an oil stove or gas stove, your culinary tour is incomplete if it is not followed by a bowl of red bean ice. This Indonesian dessert, which is also a Chinese culinary acculturation, contains fresh, dried and canned red beans, then is given a mixture of coconut milk, shaved ice, and additional cocopandan syrup.

Serving red bean ice is also in Manado, North Sulawesi, but the difference is the use of brown sweetened condensed milk instead of cocopandan syrup. Which do you prefer?

Unlike the Sekoteng from Central Java, this dessert is often served to warm the body when the weather is cold. Sekoteng ice is served with additional grated ice which makes it cool. The result of H. Basyar Sujan’s innovation in the 1980s was given the trademark Es Sekoteng Oyen, and has now begun to spread throughout Indonesia.

Not to be outdone, in Bogor there are also Bogor Permai sekoteng ice outlets which are always enlivened by visitors every day. Usually this Indonesian dessert is enjoyed after eating a plate of fried toge served warm directly from a gas stove or oil stove.

Klepon or kelepon is a kind of traditional food or traditional Indonesian cake which belongs to the market snack group. This food is made from glutinous rice flour which is shaped like small balls and filled with brown sugar then boiled in boiling water.

Klepon, which has been cooked, is then rolled over the grated coconut to be attached, so the klepon appears to be grated with coconut grated. Usually klepon is placed in a container made from banana leaves. This dish is very suitable for dessert because the taste is sweet and fresh. When bitten, palm sugar will immediately break in the mouth.

Those are the desserts that are famous in Indonesia. As Indonesians we should be proud that we have many kinds of culinary that even people from abroad like it.

10 Most Common Side Dish in Indonesia