It’s not satisfied to visit abroad, if the tourist attractions in the country alone have not been traced. It’s never endless when talking about tourism potential in Indonesia. Ethnic, cultural and religious diversity is a factor that makes Indonesia rich in tourist attractions.

Indonesia is a country inhabited by various religions and beliefs. Besides being able to live side by side, they have different ways and places of worship. In Indonesia, there are many religious places that can be visited and are open to any tourist. The following is the list of religious place in Indonesia you need to visit. 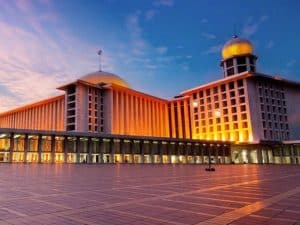 The mosque is located in the heart of the capital city of Jakarta, was asked to be the largest mosque in Southeast Asia. The history hidden in it is also interesting to explore more deeply. The construction of this mosque was initiated by Indonesia’s first President, Ir Soekarno. Built from 1951 and ending in 1978, a span of 27 years to build a Muslim place of worship produces modern architectural splendor and geometric ornaments that we can enjoy today.

What’s interesting is that the architect who was in charge of designing this building was Frederich Silaban, a Christian born in North Sumatra. Of course, this is evidence of strong religious tolerance in Indonesia. 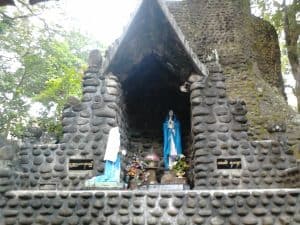 This place of worship for Catholic Christians is located in the village of Puh Sarang, District of Semen, Kediri. With an area of about 13 hectares, this cave is one of the places of worship of Christians who have a magnificent and large crossing diorama.

The length of the cross road that is traversed when visiting the pilgrimage is not felt because of the shade of the trees and the nature of the environment around the Cave of Maria Lordes is able to protect the pilgrims from the heat of the sun. This cave that was built in 1998 is a replica of Lourdes Cave in France on a small scale.

Besides the cave, there are 12 showers that symbolize 12 Apostles of Jesus in them. In addition to praying, this shower is also one of the attractions of tourists, because the water can be directly drunk and is said to be efficacious for health and bring good luck. 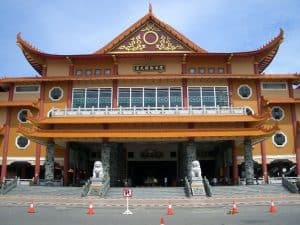 A Buddhist temple located in the Cemara Asri housing complex, Medan is the largest monastery in Indonesia. It has beautiful architecture, but still simple which is the hallmark of this Maitreya Monastery. However, the construction itself took 10 years.

Decorating koi ponds and bird parks makes this temple so comfortable. Anyone who visits must be comfortable to linger and spend time there. That said, the birds found in this park are migratory birds from Europe and Australia. As the name implies Maitreya, this monastery, which has an area of 4.5 hectares, is very thick with the teachings of Buddha Maitreya who teach love to the universe. At this monastery, you will occasionally see monks doing worship in a quiet atmosphere. 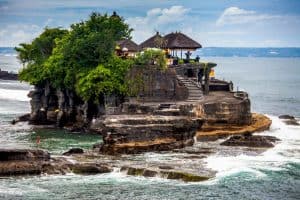 The temple which is located in Beraban Village, Kediri District, Tabanan Regency can be reached in approximately 1 hour from Ngurah Rai airport. The temple with beautiful sea panorama is built in two different places, one is located in a large rock and another is located on a cliff that juts into the sea.

This place of worship of the sea guard god is one of the famous objects when visiting Bali, when the sea tides, this temple will be seen in the middle of the sea, underneath there is a small cave in which there are several flat-tailed sea snakes, with black and yellow. This temple is always crowded with local and international tourists. And if you’re lucky you can see Hindu worship rituals during Galungan and Kuningan holidays.

At first glance, the building located in the Gayamsari area, Semarang looks like the Prophet’s Mosque in Madinah. The building measuring 7,662 m2 with a yard of 7,500 m2 is able to accommodate no less than 15,000 worshipers and belongs to one of the grandest buildings in Indonesia. 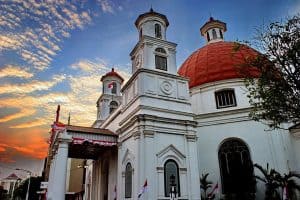 The church which is one of the Dutch relics has been around since 1753 ago. Blenduk Church, Semarang is also one of the landmarks in the Old City of Semarang. The building of this church itself, Neo-Classical style. The Blenduk Church itself has a meaning in Javanese, which is ‘Rounded’ because the Dome Dome of the Church forms like a sphere.

Located on Jalan Letjend Suprapto 32 Semarang, the Blenduk Church has a large dome coated with copper. Classic European style, the whole room in this Church really has a beautiful and stylish interior that is very luxurious. If you are already in Semarang, don’t forget to see the splendor of this Blenduk Church. 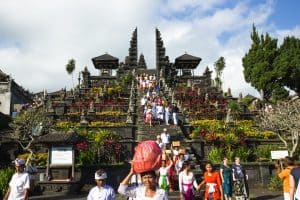 Another beautiful temple in Bali can be a religious tourism destination for Hindus in Indonesia and the World, namely Besakih Temple. This temple itself is the largest temple complex in Bali and is located on the slopes of Mount Agung, the highest mountain in Bali.

The name Besakih itself is taken from Sanskrit “Wasuki” which means “safe”. As the center of the temples in Bali, Pura Besakih has 1 central temple, 18 escort temples, and a grand upgrading temple. 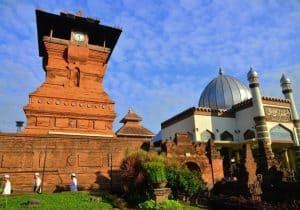 Almost all Muslim pilgrims know this popular Islamic pilgrimage destination. Built since 1549, the mosque, which has an architectural influence from Hindu culture, also has a complex with the tomb of Sunan Kudus. He is one of the publishers of Islam in Indonesia which is one of Wali Sanga. Since then, Kudus mosque becomes popular in Indonesia.

During the celebration of Muslims, the mosque is often crowded with pilgrims. The building which is typical of architectural artwork is also very attractive to tourists who visit.

Those are the religious place in Indonesia you should visit someday. Those places above are always full of visitors from year to year. Hopefuly they will be exist long lastly.