After talking about some the Indonesian foods like the snack and the traditional ones, we will introduce you some of the best Indonesian dessert. Maybe some of you already notice the same article about the same topic in previous article,  but in here the list is more complete and having much options for you to choose.

Like said in the previous article, Indonesian people never really familiar with the word dessert. Why? Because usually there’s not a dessert after we eating, not like the Western Culture that always has something sweet to eat after eating the main dish. The rice, some meals, and a drink is a perfect package to eat. But, usually we will search for another food to make the rice goes smoother in our throat. The options available in here are mainly the ice products, because it’s a really good option beside the drink. But there are some snacks or crackers in here too. Let’s take a look at them, shall we? 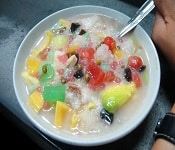 Es Campur, the best, the cheap, and yet easy to find dessert. Almost all of the Indonesian people really love this, ranging from the toddlers, up to the olds. The main reason why people loving it is the taste that you can get from the combination of many ingredients inside. 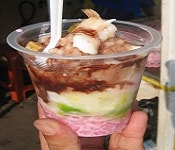 The next one on our list of Indonesian dessert is this Es Doger. For you newly tourists who still don’t know a single clue about this Es Doger, we want to tell some information for you first. This Es Doger is the special dessert that originated in the Bandung City, West Java.

After going years sold at that very city, the development of Es Doger begins. It finally reaches the other regions in Java island. Those dessert that contained some bread, fresh fruits, syrup, and ice cream, is the best thing ever. 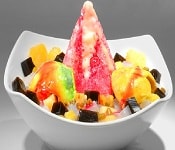 We want to introduce you to the third dessert in our list called Es Shanghai.  This dessert is actually has almost the same taste and the same from like the other dessert in here, Es Campur. The dessert itself is basically just combination of many stuff, like fruits, some sea weeds, and also ice of course.

But in the Es Shanghai, the ice is shaped into a cone, that putted in the middle of the bowl. Also, the ice is completed with some strawberry syrup on top of it. Thus, the sweet taste and the healthy Indonesian dessert is ready to serve. 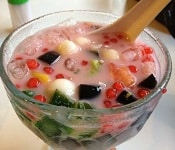 The next one, we have this Es Buah or some people call it as Sop Buah (also known as Fruit Soup). Even though usually the word sop in Indonesia mainly use for the other hot soups like chicken soup or cream soup, this Es Buah is one cold dessert that really good to ear during the hot day.

It’s pretty simple to make it. You can just add some fruits that available in your fridge, no matter what is it, and simply cut them, and put them into one big bowl (small or medium bowl can also be used, choose which you prefer). And for the final step, add some ice, and some syrup. Also don’t forget to add some sugar to make it better. 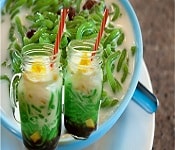 The next appetizing dessert you should try when travelling in Indonesia is the Es Cendol You can find it by many names. In the land of Sunda (West Java), it goes by the name of Es Cendol. But in teh land of Central Java, usually people call it as Es Dawet.

Maybe some of you donering, what are those green things? Those are called the Cendol(s). People make it from the rice flour, and then add some green colour to it that came from the Indonesian plant called Pandan (Pandanus). Put all of the cendols together and add some coconut milk, sugar, and ice. Done. 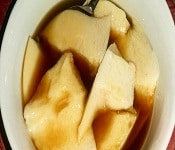 The next one is Kembang Tahu. Actually it came from the Tionghoa’s culture, and one of the cultures that they have is the way to make Tofu. Usually when making Tofu, there will be some sediment on the surface. And that’s what people called as Kembang Tahu, or maybe you knew it as a Tofu Skin.

This specific food can be processed into some foods like Cap Cay, or for the additional ingredient for the other Indonesian food called Timlo. But beside that, you can make a dessert out of it, by combining it with some Javanese sugar. 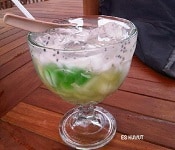 As one of the best dessert in Bali, you should try one of its finest called Es Kuwut. By the look, it’s really simple. But its taste, will blown you away. You can order one of these during your trip in Bali, espeically when the weather reaches its hot level.

The taste is really cold and refreshing, thanks to those lemons and coconut. Also there’s melon in here too, to make the dessert a little bit sweet. If you want to taste it, you don’t have to go to Bali only just for it. You can easily make it in your own house. Serving it for your whole family would be a great thing to do, especially during the break fasting. 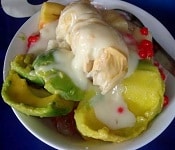 Well, this dessert is very affordable, even for the middle schoolers. There’s some vendors selling this stuff, usually they use their own wagon. Or, you can just search for it in some sellers that sold the Es Teler just beside the road. 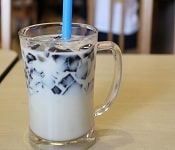 Another dessert we’re talking about is the Es Cincau. The Cincau itself is actually the Chinese traditional food, usually has the jelly texture with black colour. It tastes like the Cendol, but it looks is way more different.

The serving of this Es Cinau is also vary. There’s the Es Cincau that used Coconut Milk and ice, and in this time, many product with the same name of “Es Cincau” but sold the different additional ingredients like chocolate or vanilla. But all of them use the base ingredient, which is the cincau itself. 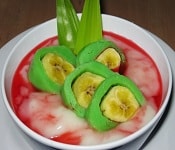 In the number ten, we have this Pisang Ijo. If the banana ice cream is too mainstream for you, than you shoudl try the other blasting dessert of Pisang Ijo. This is actually the traditional dessert that came from the South Sulawesi province.

The difference between this Pisang Ijo and the other bananas is the skin, or the cover. The bananas in this dessert are covered with some kind of dough that has green colour, and then combined altogether with some ice and straweberry syrup. That’s why, it was named Pisang Ijo, or the green banana. 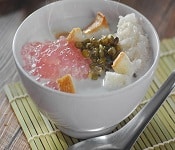 We should rest a bit by consuming something warm. In this rainy days, it’s better to support our body with something nice and warm, that really good to make our body more steady during this hard times. The solution, is Angsle.

Angsle is traditional food in Java, especially in the province of Central and East Java. The things that you can get in a bowl are the ginger soup, which is added with some sugar, and then the breads, and the other additional stuff based on the seller. 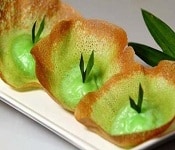 Maybe you knew about the name crepe, that really famous snack that has so many modifications. If youw ant to try the other thing than crepe, but has something more good than it, then maybe you should take a look at this traditional dessert called Kue Ape or Ape Cake.

The design of the Kue Ape can make th eyes spoiled, because it’s so beautiful. Not only the chocolate colour on the sides of it, but there’s green colour in the middle, that has its own taste. It’s recommend for you if you want to look for the healthy snack. 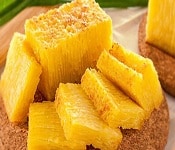 Even though there’s the name Ambon inside it, the fact tells us that Bika Ambon was born in the land of Medan, North Sumatra. Bika Ambon is one of the Medan “souvenirs”. Many people in Indonesia already designed the other flavor for the Bika Ambon, like the Durian, Chocolat, or maybe Cheese Bika Ambon.

This dessert can be found in the cake shop, but eventually you can find it during your trip, because it also sold in the souvenir shop too. Even though there’s the other food that has the same name in Malay, this Indonesian version of Bika is different because it has some holes in it. 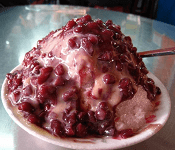 In the number 14 of our list, here’s the other ice called Es Kacang Merah (red bean). Like the all ice desserts mentioned above, this one is also very healthy to consume, remembering the base composotion is the red peanut, which is very good for body metabolism.

This dessert is recommended for the old and the growing kids, especially to pump the height. The protein contained on it is also the best for the brain, of course, many people will be very supported by these benefits of this Es Kacang Merah dessert. 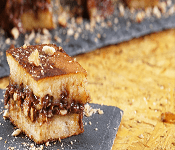 The next dessert is Martabak Manis. This fod goes with so many names, even some people start arguing about it though, just for fun. But, the names don’t give any different or confusion, people still understand the Marbatak Manis, even though you tell them different names.

Beside the 15 Indonesian dessert above, you can try the other options available on the small list below :

So that’s our list of the best Indonesian dessert, hope you can find your favorite one in here. And be sure to at least try some of them that included on the list while having your trip in Indonesia. Beside gaining the good taste of them, eating them would create such a good memory in the way of culinary trip.

10 Types of Tourism in Bali – Characteristics