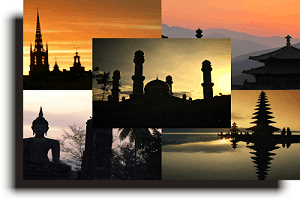 Beside having rich history and culture, Indonesia also has many religions that still exist in peace. All of people respect each other, even they have different religion. That religious harmony also make Indonesia more famous in the eye of the world. Th high level of tolerance is the thing rarely found anywhere else, except Indonesia.

So what are those religions that exist in Indonesia? This the special list for you : 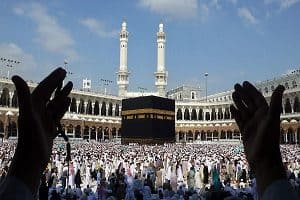 Indonesia is a country with the largest Muslim population in the world, with 87.18% of the population being Muslim. The majority of Muslims can be found in the western regions of Indonesia (such as in Java and Sumatra) to coastal areas of Kalimantan Island.

While in eastern Indonesia, the percentage of adherents is not as large as in the western region. About 98% of Muslims in Indonesia are Sunni. The rest, about two million followers are Shi’a (above one percent), are in Java.

The history of Islam in Indonesia is very complex and reflects such diversity and perfection into culture. In the 12th century, most Muslim traders from India arrived on the islands of Sumatra, Java and Kalimantan. The dominant Hindus along with the Buddhist kingdom, such as Majapahit and Sriwijaya, suffered a setback, in which many of their followers converted to Islam. 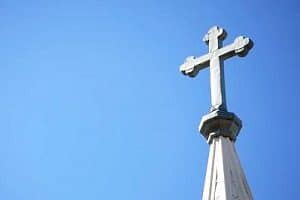 Protestant Christians flourished in Indonesia during the Dutch colonial period (VOC), around the 16th century. The VOC’s reforming Catholic policy successfully increased the number of Protestant believers in Indonesia. This religion grew very rapidly in the 20th century, which by missionaries from Europe to some parts of Indonesia, as in the western region of Papua and fewer in the Sunda archipelago.

In 1965, there was a seizure of power, non-believers who were regarded as unbelievers, and their rights were not entitled to full citizenship. As a result, the Protestant church experienced members growth. 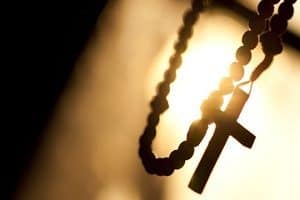 The first Catholic religion entered Indonesia in the first part of the seventh century in North Sumatra. This fact is reaffirmed by Prof. Dr. Sucipto Wirjosuprapto. To understand this fact it is necessary to research and barrage of news and testimonies spread over a wider time and place.

The news can be read in ancient history by the historian Shaykh Abu Salih al-Armini who wrote the book “List of news about the Churches and hermits of the province of Egypt and the lands beyond it”.

It contains news about 707 churches and 181 Serani hermits spread across Egypt, Nubia, Abbessinia, West Africa, Spain, Arabia, India and Indonesia. With the continuous investigation of the news from Abu Salih al-Armini we can draw the conclusion of the town of Barus formerly called Pancur and currently located in the Diocese of Sibolga in North Sumatra is the oldest residence of Catholics in Indonesia. In Barus also has established a Church with the name of the Church of the Virgin Virgin Mary. 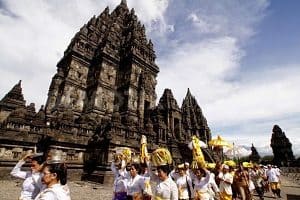 Hindu culture and religion arrived in Indonesia in the first century AD, simultaneously with the coming of Buddhism, which later produced a number of Hindu-Buddhist kingdoms such as Kutai, Mataram and Majapahit.

Prambanan Temple is a Hindu temple built during the Majapahit empire, during the Sanjaya dynasty. This kingdom lived until the 16th century AD, when the Islamic empire began to develop. This period, known as the Hindu-Indonesian period, lasted for 16 full centuries. 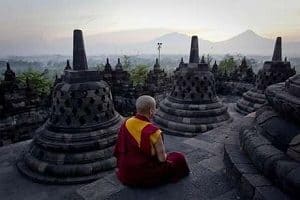 The Buddha is the second oldest religion in Indonesia, arriving around the sixth century AD. The history of Buddhism in Indonesia is closely related to Hindu history, a number of Buddhist kingdoms have been built around the same period. Like the kingdom of Sailendra, Sriwijaya and Mataram.

The Buddhism arrived with trading activity beginning in the early first century through the Silk Road connecting India and Indonesia. A number of heritages can be found in Indonesia, including Borobudur temples in Magelang and sculptures or inscriptions from the early history of the Buddhist Kingdom.

According to the national census of 2000, less than 2% of the total Indonesian population is Buddhist, about 4 million people. Most Buddhists are in Jakarta, although there are also in other provinces such as Riau, North Sumatra and West Kalimantan. 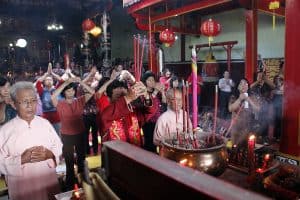 Confucianism originated from mainland China and brought by Chinese merchants and immigrants. It is estimated that in the third century AD, the Chinese arrived in the archipelago.

Unlike the other religions, Confucianism focuses more on individual beliefs and practices, than on codes of conduct, rather than a well-organized community religion, or a way of life or social movement. In the 1900s, Confucians formed an organization, called Tiong Hoa Hwee Koan (THHK) in Batavia (now Jakarta). 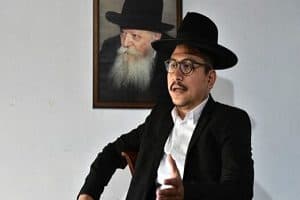 There is a small Jewish community that is not recognized in Jakarta and Surabaya. The earliest Jewish establishment in this archipelago came from Dutch Jews who came to trade the spices. In the 1850s, about 20 Jewish families from Holland and Germany lived in Jakarta (then called Batavia). Some live in Semarang and Surabaya.

Jews in Surabaya have synagogues. They have little relationship with Jews outside Indonesia. No ministry is given to the synagogue. This synagogue has been closed by Muslims who opposed the Gaza War from 2008 to 2009. The only remaining synagogue is located outside the city of Manado, which was attended by about 10 people.

Atheism in Indonesia is not prohibited by law, at l 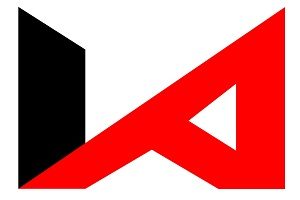 d State of Indonesia, religion plays an important role in the life of the people of Indonesia. Intan explained that according to the principles of Pancasila, Indonesia remains a religion-based country.

In other words, ideologically every Indonesian citizen is required to believe and piety to God and embrace a religion. Although a person is not subject to sanctions or penalties for being an atheist, the spread of atheism in Indonesia may be subject to criminal sanctions, in accordance with Article 156a of the Criminal Code, which states: “Sentenced to five years in prison for whoever with Deliberately publicly expose feelings or do deeds with the intention that people do not embrace any religion, the one with the Supreme God”. 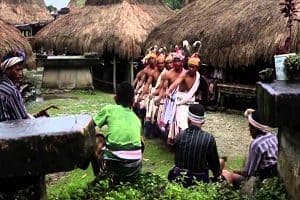 Marapu is a local religion or belief shared by the people of Sumba Island. More than half the people of Sumba embrace this religion. This religion has a religious belief to ancestors and ancestors. Marapu believers believe that life in this world is only temporary and that after the end of time they will live eternally in the spirit world, namely in the Marapu Paradise known as Prai Marapu.

Religious ceremonies such as ceremonies of death and so forth always accompanied slaughter of animals such as buffalo and horses as sacrifices. It has become a hereditary tradition that continues to be maintained on the island of Sumba. 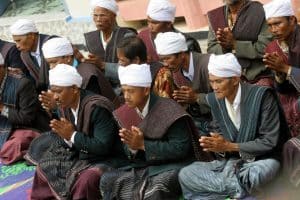 What is interesting is that Ugamo Malim has many similarities and resemblances to Ancient Judaism. Ugamo Malim has been handed down from generation to generation by the Batak Bangso Ancestor (30-35 generations) based on Tarombo (Lineage) owned by Bangso Batak, a generation of about 25 years. 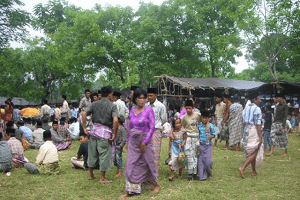 This community is a community group that has its own beliefs and rituals outside the six recognized religions in Indonesia, even though the government includes this group in the shade of Hindu Religion, but in their daily life or in celebration of the big day this community has a characteristic that is wearing black cap like Muslims but most do not wear footwear.

In the old village of Amparita, Tellu Limpoe, Sidrap regency, South Sulawesi, Towani Tolotang community has been growing and settling since hundreds of years ago. This community, awakened by generations and continues to grow until now. 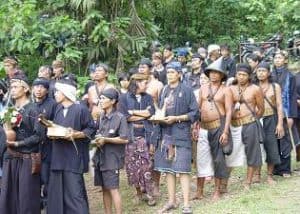 Sunda Wiwitan is a religion or a belief in the worship of the forces of nature and ancestral spirits (animism and dynamism) adopted by the Sundanese traditional society. But there are some who argue that the Sunda Wiwitan religion also has an element of ancient monotheism, which is above the gods and hyang in pantheon there is the supreme god almighty supreme power that is not tangible called Sang Hyang Kersa is equated with God Almighty.

Adherents of this teaching can be found in several villages in the provinces of Banten and West Java, such as in Kanekes, Lebak, Banten; Ciptagelar Kasepuhan Banten Kidul, Cisolok, Sukabumi; Kampung Naga; Cirebon; And Cigugur, Kuningan. According to its adherents, Sunda Wiwitan is a long-held belief by the Sundanese before the arrival of Hinduism and Islam. 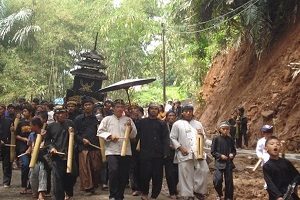 Sundanese religion is the belief of a number of people scattered in the district of Cigugur, Kuningan, West Java. This religion is also known as Cara Karuhun Urang (ancestral tradition), Sunda Wiwitan religion, Madrais teachings or Cigugur religion.

On the other hand, Abdul Rozak, a Sundanese religious researcher, said that this religion is part of the Buhun religion, that is, the traditional beliefs of the Sundanese people that are not only limited to the Cigugur community in Kuningan regency but also the Baduy people in Lebak Regency, the followers of “Kuring Religion” Ciparay District, Bandung Regency, etc.

The number of adherents in the area of ​​Cigugur about 3,000 people. If the followers in other areas are counted, then the number of Buhun followers, according to Abdul Rozak, reaches 100,000 people, so that Buhun’s religion is one of the largest groups of Believers in God Almighty. 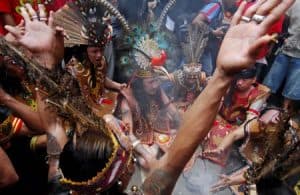 Kaharingan is a traditional belief of the Dayak tribe in Kalimantan, when other religions have not yet entered Kalimantan. The term Kaharingan means to grow or live, as in the term danum kaharingan (water of life). It has a meaning of tribal religion or belief in God Almighty (Ranying), who lived and grew up from generation to generation and lived by Dayak people in Borneo.

Therefore, Kaharingan and other tribal religions such as Tollotang (Hindu Tollotang) in the Bugis tribe, were included in the Hindu religion category since April 20, 1980, given the similarities in the use of living means in performing rituals for victims (offerings) Which in Hinduism is called Yadnya. So have the same goal to reach God Almighty, just different packaging. God Almighty in the term Kaharingan religion is called Ranying. 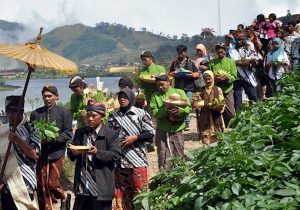 Kejawen (Javanese Kejawèn) is a belief that is mainly embraced on the island of Java by the Javanese tribe and other tribes who settled in Java. Genesis is essentially a philosophy in which exists since the Javanese is present. This can be seen from its universal teaching and always adheres side by side with the religion held in itsday.

The Jewish books and manuscripts do not affirm its teachings as a religion despite having a behavior. Kejawen also can not be separated from the religion because the philosophy of Kejawen is based on the religious teachings held by the Javanese philosopher.

That it, the list of 15 Religious Beliefs in indonesia. Even though our religion is different, but we must respect each other, creating harmony to our life. In that way, we can live in this world with peace in heart. Have a good day everyone.