10 Most Famous Tribes in Indonesia

Indonesia is a plural country with with various cultures, language, religion,and race which is recognized by the international world. Indonesian cultures are very unique and precious. Cultures have become an identity for Indonesian people. Indonesian local cultures are attracting the foreigners to come to Indonesia. 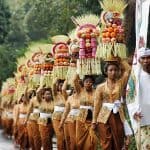 As we know, Bali is one of the most popular tourist destinations in Indonesia and it has been recognized globally.

Bali is considered as one of the favorite destinations for the Hollywood artists and it is a significant way to introduce Bali and its tribe to the people live outside Indonesia. Bali Tribe has many local cultures which attract the foreigners or the domestic travelers.

Bali Tribe offers many attractive local cultures and they often perform them to welcome the visitors. Balinese cultures are well-know with its dance, performing arts, and sculpture. The Balinese people are being called as artists because most of them have the ability to do those cultural activities. 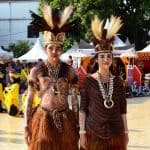 Asmat is one of the tribes from Papua Island, this tribe is well-known for its unique wood carvings. Therefore Asmat Tribe is nominated as a tribe with high sensibility in art.

Asmat Tribe is popular globally because of its qualified wood carvings Not only superior in artistic activities, Asmat Tribe is considered as a tribe is environmental-care. The clothes wore by this tribe are coming from the nature.

The clothing material for Asmat traditional clothes are purely environmentally sustainable. This symbolizes the closeness of Asmat Tribe with the world’s natural environment. The design of those clothes are inspired by the nature. The male’s Asmat tribe clothes have a design which resembles bird or any other animals which reflect masculinity. Meanwhile the female’s skirt and clothes are designed upon cassowary to reflects beauty. 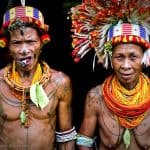 Mentawai is the native inhabitants of Mentawai Island. Mentawai has a distinctive tradition which is wearing tattoo in all over their bodies. They are no using tattoo for nothing, those tattoos are reflecting a social status. This tribe was isolated for centuries from the the outer civilization. 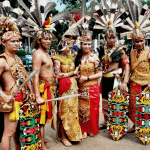 Dayak Tribe is the original tribe for people who live in Kalimantan, the word Dayak itself refers to the people who live far from the city life. Just like the other tribes Dayak tribe also has special characteristics.

Before the 20th century, they were only believing ancestors, animals, rocks, and natural signs, it is pretty similar with the ancient Hinduism belief. They believe in natural signs so they are very obedient to the law of nature.

The Dayak Tribe people are forbidden to mingle with the other civilizations outside the Dayak border. The Dayak people are getting anxious therefore they usually move from one forest to other forests or from one cave to other caves. Dayak Punan Tribe is considered as the most primitive one, the people are barely communicating with the general people and they even live in a deep forest. They have been living life in accordance with the ancestors instructions to keep them away from any distress. 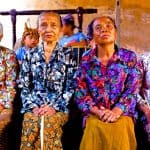 Javanese tribe is known as the largest tribe in Indonesia. As well as the most influential tribe among all aspects of Indonesian society. That’s why, they play so many vital and important role in many sectors. Such as commerce, entrepreneurship, government, agriculture, etc.

Javanese language becomes a study program in one of Australian Universities meanwhile Javanese gamelan is popular and being favored by the people who live in England.

To know more information about the Javanese gamelan, read about: 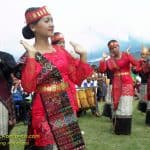 This name is given to the people who live in the Noth Sumatera province. The ethnic groups that are categorized as Batak tribe  such as  Batak Toba, Batak Karo, Batak Pakpak, Batak Simalungun, Batak Angkola, and Batak Mandailing.

Batak Tribe is known for its clans, there are various of clans taken from the male lineage. Those clans are becoming the symbol of the Batak family.

According to the belief of the Batak people, the Batak clan originated from Si Raja Batak which is believed to be the origin of the Batak people. Batak Tribe has so many cultural elements from dance, musical instruments, traditional fabric, and ceremonies. The popular traditional dances are Tor-Tor and tari serampang 12. The popular musical instruments are Gong and Saga-Saga, meanwhile a fabric which belongs to this tribe is ulos fabric. 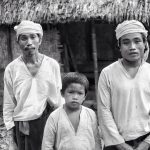 This tribe lives in Lebak Banten in Javanese Island. Baduy Tribe is divided into two complex which is Baduy Dalam and Baduy Luar. Baduy Dalam ignores the outer civilization or modern civilization.

The people who live in Baduy Dalam are very introvert and conservative. They ignore technology, the Indonesian government, and even forbid any interaction with people outside its border.

However Baduy Luar is more open to the modern civilization compared to Baduy Dalam. Baduy Tribe is well-known for its magical characteristics, the Baduy people are sakti or sacred. Some of them even have the ability to do fortune telling activity.

Those are only a brief explanation about the most popular tribes in Indonesia. So, which tribe attracts your attention the most, readers?