The Monitored Mountains of How Many Volcanoes in Indonesia are Active

Indonesia is the country with the most volcanoes in the world. Of the total volcanoes around the world, 13 percent are in Indonesia. In 2017, noted that there are at least 139 active volcanoes that spread across several regions of Indonesia. Of the many active volcanoes, it is surprising that nearly half of these mountains are not equipped with seismic equipment that is the most standard equipment to monitor the activity of a volcano.

Frequently the question of how many volcanoes in Indonesia are active is being questioned by most of people. There are 18 mountains that continue to be observed in the Center for Volcanology and Geological Hazard Mitigation (PVMBG) due to fluctuating status which may occasionally erupt which 18 volcanoes have erupted at least once.

PVMBG claimed explicitly that approximately 4.5 million of Indonesia’s population threatened by volcano eruption. However, the agency strives as much as possible to detect before the volcano erupts, so there will be the time to evacuate residents from the danger zone. The earth’s plate motion has triggered volcanic activity in Indonesia. Here are the list of active volcanoes that continuously observed by PVMBG even also by some scientist of the world. 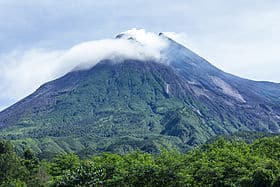 Merapi is one of the most dangerous volcanoes in Indonesia due to the frequency of eruption and its densely populated slopes. Swallowing nearly 400 lives, its eruption in 2010 is by far the deadliest in the 21st century. This mountain has an altitude of 2968 meters above sea level, located on the central island of Java, standing among 4 districts at once: Magelang, Klaten, Boyolali and Sleman districts.

Some might argue that the next eruption of Merapi should have occurred, although there were no early signs of increased activity or volcanic turmoil. Merapi is rumored to have erupted in early May 2018. Although it is considered as a phreatic eruption, but local BMKG has been trying to evacuate people at safe levels. The government is also trying to minimize the victims of this eruption if the eruption back. 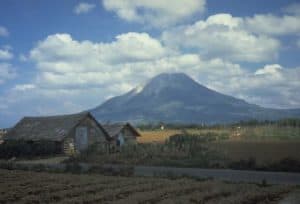 Sinabung with the height of 2,451 meters above sea level, located in Karo district, North Sumatra. This mountain is the second highest mountain in the province of North Sumatra. Located near the mountain Sibayak, making these two mountains are two adjacent volcanoes. However, Mount of Sibayak is not as active as Mount of Sinabung.

In historical records, since 1600 AD, Sinabung volcano has never been active again. However, in 2010, this mountain shows its arrogance, it is active again and erupted massively in 2010. Then it started to erupt again in 2013 and last, Sinabung erupted in 2016. Until now, Sinabung volcano is on the dangerous status. 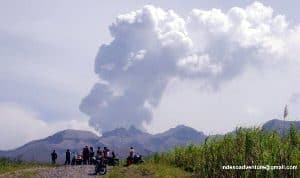 The highest peak of this mountain is at an altitude of 1731 meters above sea level. It is located on the border of 3 districts: Malang district, Blitar and Kediri regency, East Java. This resulted in disputes between Kediri and Blitar districts. They both claim that the mount of Kelud is included in their territory.

Mount Kelud is one of the most active volcanoes in Indonesia Noted, since 1000 AD, this mountain has erupted 30 times. The most deadly eruption is the eruption that occurred in 1919 which sacrificed 5.160 inhabitants. The last time, Mount Kelud erupted in 2014 and killed 7 people. Until now, Mount Kelud is still being monitored by the Geophysical Meteorological Agency.

In 1675, Karangetang volcano erupted which was touted as the most powerful eruption of Karangetang mountain. It took out the lava and drained it into people’s homes, very horrible. Noted, since 1675, this mountain has eruption as much as 41 times. It last erupted in 2010 and 2011. Currently, Karangetang status is still being controlled by BMKG.

Bromo’s own name was taken from a Hindu god, the god Brahma. It has a height of 2,329 meters above sea level. It is located in 4 districts at once: Pasuruan, Lumajang, Malang and Probolinggo districts. Mount Bromo is included in TNBTS area, Bromo Tengger Semeru National Park.

Noted, during the 20th century and 21st century, Mount Bromo has erupted 68 times, with calculations every 30 years. The most powerful eruption occurred in 1974 and 2015 was its last eruption. Until now, Mount Bromo is set to “siaga” status. However, some people could still visit this beautiful place to see the nature. 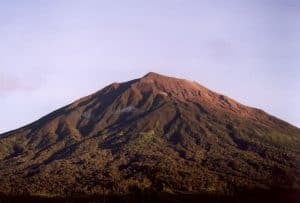 Mount Kerinci is a volcano belonging to the category of type A, which is a volcano that once erupted, at least once, since the record in 1600 AD While 2009 is the year when the Kerinci volcano erupted the last time until now. Until now, Mount Kerinci is still being supervised by BMKG (Geophysical Meteorology Agency). 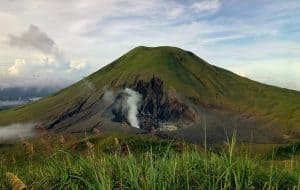 Its height reaches 1,580 meters above sea level, standing toughly in North Sulawesi. Mount of Lokon is among the most active volcanoes in Indonesia. Modern history records that Lokon volcano erupted in 1951, 1991, 2001 and last in 2011.

The most powerful eruption of Mount Lokon is the eruption that occurred in 1991. The awesomeness is illustrated by the fact that the eruption caused a material loss of Rp. 1 billion. Thousands people of Kinilow , Kakaskasen I, Kakaskasen II and Tinoor villages had to be evacuated massively. The thousands of roofs of the houses of the villagers had been destroyed by falling rocks and dust as thick as 20 cm. In this disaster, there was a Swiss tourist named Vivian Clavel who has never been found until now. Up to now the BMKG still continuously supervise this mountain activity. 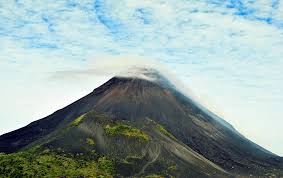 Located in North Sulawesi, the height of Soputan mountain reaches 1.784 mdpl.Gunung is formed during the Kuarterner on the southern edge of the Tondano caldera, and is one of the most active volcanoes in Sulawesi. Noted there has been a fairly frequent eruption within a span of time every few years.

The record shows, since 1785, this mountain has erupted 40 times. In some time, the eruption is almost once a year. The last eruption occurred in 2012. Until now BMKG still keeps an eye on this mountain activity.

The child of Krakatau is one of 100 volcanoes that NASA continues to monitor through the EO-1 Satellite. There are two reasons why NASA keeps watching the child of Krakatau. In addition to the constant eruption, also because of his past.

Krakatau’s mother, Mount of Krakatau erupted on August 27, 1883 at around 10:20 with the power of 13,000 times the atomic bomb that devastated Hiroshima and Nagasaki, Japan. One of the most colossal volcanic eruptions in history. At that time, the sound of Krakatoa eruption was heard until Madagascar and Australia. Two-thirds of the mountain sank to the bottom of the sea, and created a tsunami that killed tens of thousands of people.

Agung mountain eruption in Bali 2017 invited the attention of the world media. It is located on the island of Bali, precisely in District Rendang, Karangasem regency. It is the highest volcano in Bali with an altitude of 3142 mdpl and the type stratovolcano (conical).

Mount of Agung which is an active volcano has already erupted earlier in 1808, 1821, 1843, and the most terrible in 1963. Victims in this eruption reached 1444 people, 1,148 died and 296 people were injured. The terrific eruption of Mount Agung in 1963 resulted in eruption material scattered to cover the Surabaya airport in East Java, while the ash rain reached Jakarta which was 1,000 km away. Up to now, the activity of this mountain is being monitored by BMKG.

Those are some examples of the mountain that is still monitored by BMKG. Some of them are even observed by NASA. All in all, it is true that Indonesia is a country with a great risk of volcano eruption since most of the islands have the active volcano.

The Side History of Surfing in Indonesia