10 Importance of Agriculture in Indonesia 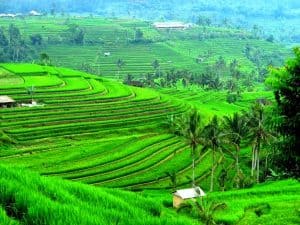 Agriculture is the main source of the national economy.  Indonesia is an area with a great number  of natural resources. That makes Indonesia known as an agrarian country.

Moreover, most of the livelihood of Indonesia comes from agricultural sector. The sector is also useful to boost the image of Indonesia in the world.

That’s why this country is called an agrarian country which makes agriculture as the main source of the national economy. Indonesia has the great potential land areas to develop the business in the agricultural sector. Furthermore, here we would expand the importance of agriculture of Indonesia.

Indonesia is a fertile country because it is traversed by three volcanic trails that are not owned by any country. Indonesia’s soil fertility is already recognized world. The location on the equator causes enough sunlight for the development of the agricultural sector. The temperature is not too hot and because of the relatively good agro climate, so the condition of the land is also relatively fertile.

The location of Indonesia is outside the typhoon zone as it afflicts the Philippines, Taiwan, and Japan. The condition of facilities and infrastructures such as river basins, irrigation dams, rural roads are relatively good, supporting the development of agribusiness.

In general, Indonesian people used rice as their main food. Meanwhile, the current domestic rice production of farmers to meet the needs of the people of Indonesia has not been sufficient. The evidence is the existence of government policy to import rice from Vietnam and Thailand to meet the safe domestic rice stock. That is why agriculture in Indonesia is important to meet the stock of main foods.

The agricultural sector is a source of human life as well as a promising sector for the Indonesian economy. Agriculture is one of the pillars for the life of the nation. Farming is a noble job, in addition to its own life, is also important for the preservation of nature and other living things.

5. The great power to reduce unemployment

The agricultural sector, which includes food crops, livestock, horticulture, plantations, fisheries and forestry, plays a major role in the provision of food to support national food security in fulfilling the right to food and contribute to foreign exchange earnings and gross domestic product (GDP). In 2003 the agricultural sector absorbed 46.3 percent of the workforce of the total labor force, accounting for 6.9 percent of total non-oil export value, and contributing 15 percent of the national GDP.

Farming is an activity that has been done by the Indonesian people since ancient times or primitive, and very inherent in the customs, culture and lifestyle of Indonesian society. IT is impossible to change Indonesia into industrial sectors at all, since their basic skill in farming activity is the inheritance from their ancient.

Most of countries in the world have changed into modern-industrial country. A number of countries as like Malaysia, Singapore, even Thailand have changed their main sector into industrialism. It could give the dangerous effect toward the earth in future. Industrialism would increase more CO2 emission that would break the ozone layer that protect from ultraviolet. That is why the agricultural sectors in Indonesia must not be changed into the industrialism since it would help the balance of environment. The oxygen that produced by the most of plantation would help our earth.

It couldn’t be denied that the most Indonesians (especially in rural and village area) fulfill their needs through the agricultural sectors. This is due to several factors. In terms of its history, the Indonesian population is a resident with a strong maritime character. Just look at the kingdom of Sriwijaya in its heyday. The Dutch invaders who forced the Indonesian people to do the forced cultivation so that most of the population left the maritime life and turned it into an agricultural activity.

The significance of Indonesian agriculture is reflected in efforts to find solutions to global problems. Through Indonesia’s increasingly respectable position in international forums-ASEAN, APEC, or G-20-the role of Indonesia can be more conveyed.

Those are the importance of agriculture in Indonesia. Indonesia has a great potential of natural resource that we should preserve. Hopefully, we as Indonesians could be thankful with this blessing to be given the fertile land.

The Brief History of Bandung Indonesia

10 Steps How to Divorce in Indonesia