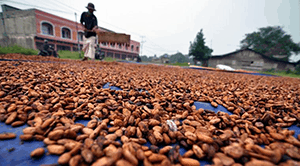 Cocoa is one commodity that can contribute to the increase of foreign exchange currency for the national economy. Indonesia is one of the world’s major cocoa suppliers after Ivory Coast (38.3%) and Ghana (20.2%) with a 13.6% percentage. By cultivating Cocoa into a quality product in the country then we have been able to deposit money to the state’s finances by around 5% or USD 200 / ton of each export of Cocoa beans.

To process cocoa beans into chocolate requires adequate knowledge to reach for the high-quality results and has a sale value to be marketed as a product worldwide. Food and beverages produced from cocoa plants are now popular in almost all segments of society. And not just the children who like it but even the adults make chocolate as their favorite food and drink. 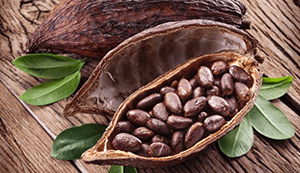 Cocoa trees are native to the America Continent, precisely at the foot of the Andes mountains in the basin of the Amazon and Orinoco rivers, South America.

However, the evidence of cocoa trees that were once widespread to Central America is strengthened by the findings of a handicraft of clay dated 1400-1500 BC found at the excavation of the archaeological site and there are residual deposits of cocoa that reinforce it there.

In addition, the sweet chocolate flesh or cocoa pulp is fermented to make a type of beverage and cocoa beans thus became the currency at that time.

Cocoa is an important commodity of the Meso, American community before the arrival of Columbus. Hernán Cortés during the Mexican conquest reported that Moctezuma II, the Aztec king always drank chocolates of vanilla and spices to accompany his dinner. It is estimated that the king drank about 60 servings of chocolate per day and as many as 2000 servings by members of noble families in the kingdom. Theobroma which became the genus name of the chocolate tree has the meaning of “the food of the gods”. Chocolate was then introduced to Europe by Spanish explorers and became a famous drink in the mid-17th century. Chocolate plants were then transported and cultivated to European colonies such as Southeast Asia and West Africa.

The cocoa then introduced in 1560 in North Sulawesi that came from the Philippines. The first type of cocoa plant is called criollo, which the Spaniards brought from Venezuela. That cocoa production is relatively low and sensitive to pests and diseases, but it tastes good. In 1806, cocoa expansion efforts began again in East Java and Central Java. Planting is done on the side field of coffee planting area.

Seasons for Cocoa Production in Indonesia 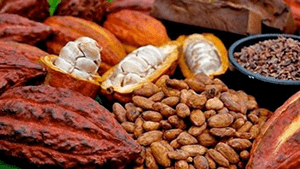 Cocoa is regarded as a people’s plant because almost in all parts of Indonesia, people can grow these chocolate-producing plants. And 90% of the cocoa fields are owned by farmers. Cocoa trees normally grow in hot tropical climatic conditions, generally in the latitude range of 20 degrees from the equator.

Cocoa fruit does not recognize seasons as this tree bears fruit and can be harvested throughout the year. The most common pests in cocoa production are the insects of the Miridae family and the fungi of the Phytophthora genus.

The immature cocoa fruit has a bright color, usually green, red, or purple. When it is ripe, this fruit is yellowish to orange. This fruit appears directly from the tree trunk, like jackfruit. This facilitates harvesting because the fruit does not appear on the high ground. And this tree bears fruit throughout the year. Harvesting is done with a sharp knife and farmers must be careful not to hurt the stem because the brown flowers can grow in the same place. It is estimated that farmers can harvest about 650 cocoa beans per day 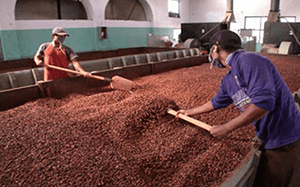 To process Cocoa bean into chocolate can be achieved using Fermentation. Fermentation is a process of producing a product with microbes as a processing organism. Fermented cocoa beans are a traditional fermentation involving native microorganisms and endogenous enzyme activity. The fermentation of cocoa beans does not require the addition of starter cultures since cocoa pulp containing lots of glucose, fructose, sucrose and citric acid that can incite the growth of microorganisms to ferment.

The processing of Cocoa into chocolate with Fermentation system will produce cocoa with flavor equivalent to that of cocoa from Ghana. Because Indonesian cocoa has an advantage that’s not easily melted so it is suitable for blending.

To process cocoa, then firstly Cocoa bean are peeled to remove its skin. Then the seeds that are still wrapped in pulp stacked together in a container for a few days for fermentation purposes. The fermentation process will produce heat and cause the pulp to melt. Some countries use this pulp fluid to produce alcoholic beverages. The rate of fermentation and drying is very dependent on environmental conditions. One kilogram of cocoa beans contains about 880 grains of cocoa beans. While one brown fruit weighs about 400 grams and produces between 35-40 grams of dried beans. It is estimated that one labor worker can separate as many as 2,000 chocolate seeds from the fruit per day 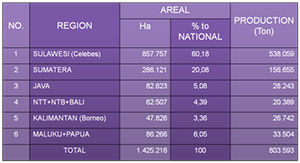 For the best places in Cocoa plantation then Sulawesi remains the largest cocoa producing region in Indonesia. Where as 60 percent of Indonesia’s cocoa area is found in Sulawesi, which contributes up to 500 million tons of national production.

Then, the second best places are in Sumatra with an area of approximately 300 thousand hectares, contributing up to 150,000 tons of production, concentrated in Aceh Province. The rest of the plantation is spread across on the island of Borneo, Bali, Maluku, and Papua.

From the quality of the harvest, cocoa farmers in Sulawesi generally understand about fermentation process. However, farmers in Sumatra, Bali, and Java have relatively little knowledge of fermentation, except those who have become partners with cocoa processing companies. Only in some areas, several cocoa farmers are doing away with the forest conversion. For example, in Sumatra, in some districts, farmers began to change old cocoa plants with palm plantation. Of course, this consideration is made for the economic reason by the farmers themselves.

Unlike palm oil, cocoa trading still opens up speculation opportunity and still allows new traders to enter the market. In addition, price variations between districts and even between villages can be very significant. However, for manufacturers, such conditions are then used to get cheap cocoa beans. The reason, in the future, with the government policy, encouraging foreign companies to invest in establishing a cocoa plant in Indonesia. Preferably, cocoa processing companies to start building partnerships with farmers. The goal is that the company can get a supply guarantee in cocoa production, and then can induce the farmers to the quality of cocoa processing that suits the needs of the factory requirement to process.

Successful factors for cocoa production can be categorized by 2 parties, namely the farmers that’s responsible for the production and the government that’s needed to maintain productive regulations enforcement.

At harvest time, Indonesian cocoa farmers have a tendency to process cocoa seeds without fermentation by soaking the seeds in water to remove the pulp and continued on by drying them, thus the seeds are ready to be sold without regard to quality inspection. This step is taken by farmers to get quick sales results because if they went through with the fermentation process then that’s required incubation period so that farmers have to wait to acquire profit from the sales. They don’t seem to realize that fermentation is an important key to provide the quality taste of chocolate

In fermentation stages of post-harvest processing of cocoa, then the fruit of the harvested beans and the pulp-coated seeds are removed and then collected in a container. The types of containers used may vary, including drying platforms, leaf-lined baskets, and wooden containers. Containers are stored above ground or over the channel to accommodate the pulp juices produced during fermentation as pulp degradation results.

Generally, the base of the container has a small hole for drainage and aeration. The container is not filled in completely, leaving 10 cm from the top and the top surface is covered with a banana leaf which aims to retain heat and prevent the surface of the seed from drying. Fermentation in the box can be done for 2 to 6 days.

Products that went through the fermentation process can obtain a real taste of chocolate with a relatively low-cost production. Fermentation can be done traditionally and requires no special treatment, only wooden fermentation containers, storage space, drying ground, and abrasive machine are required. Thus, knowledge of the importance of fermentation in cocoa beans needs to be disseminated to chocolate farmers in order to be able to cultivate cocoa well in production.

In line with that, the breeding program to get superior planting materials continues to be actively implemented and pursued. In 1973, the cocoa bulk type was then introduced by PT Perkebunan VI and Medan Plantation Research Institute (BPP). Bulk type cocoa minimizes the possibility of pests and other types of rotting in a cocoa plant thus high production yield that increases throughput can be expected.

Several policies have been issued by the government to encourage national cultivation progress of cocoa in both on-farm and off-farm sectors. The policy includes exemption of import duties on machinery import in the framework of investment and reducing taxes. The production of cocoa is vital to the development of Indonesia’s economy that’ll, in turn, benefits many people living in Indonesia and increasing the government coffers. The introduction of better techniques in farming and the introduction of knowledge of fermentation process is key in increasing the Cocoa beans production