Here is the list of interesting fact about Angklung: 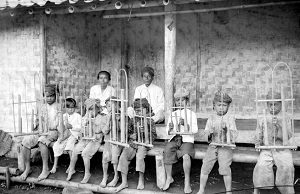 A record regarding to the origin of Angklung emerging at the era of the kingdom of Sunda (12th century until the 16th century).

There is also an assumption that the primitive forms of Angklung has been used in Neolithic culture that developed in Indonesia until the beginning of the modern calendar.

Meaning that Angklung is part of the relics of pre-Hinduism in the culture of Indonesia.

The origin of the creation of bamboo music like Angklung was based by the worldview of agrarian society of Sundanese. Rice as the lifeblood of Sundanese, gave birth to the myth of the belief in the Nyai Sri Pohaci as a symbol of Dewi Padi, the giver of life (hirup-hurip). Baduy people, who are considered as the remnants of the original Sundanese people, applying Angklung as part of the ritual before planting rice.

The next of Indonesian Angklung Facts is types. There are many types of Angklung, in which each have their own uniqueness, such as: 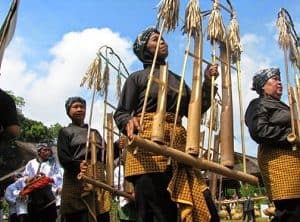 In Kanekes, not everyone can make Angklung Kanekes. The people whose entitled to make Angklung is the Kajeroan (Tangtu; Baduy Jero). Then, Kajeroan consists of three villages, namely Cibeo, Cikartawana, and Cikeusik. Even in these villages, not everyone can make it, only the entitled people can do it, Thus, there are special requirements of ritual.

For entertaiment, Angklung usually play when the moon is bright and not raining. People play Angklung in buruan (a large courtyard in the countryside) while singing various songs, among others: 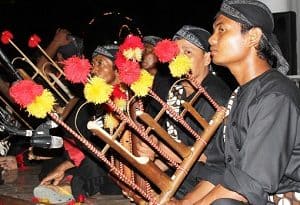 Angklung Reyog is a traditional musical instrument made of bamboo with a red and yellow yarn as the decoration. Meanwhile, Angklung Reyog usually play along with the art of Reog Ponorogo dance in East Java. Angklung Reyog have specific characteristics, such as: 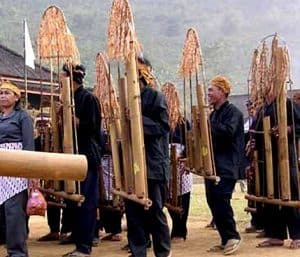 The art of Dogdog Lojor in Pancer Pangawinan Kasepuhan community or the customs union of Banten Kidul. Then, its spread around Mountain Mist (bordering Jakarta, Bogor and Lebak).

The using of Angklung in the art of Dogdog Lojor is because of its connection with the ritual of rice. Once a year, after harvest, the whole community held a traditional events, or Seren Taun Taun Serah in the center of the village.

The instruments used in the art of Dogdog Lojor is two pieces of Dogdog Lojor and four pieces of large Angklung. Each Angklung have its own name, which is the largest called Gonggong. Then, there are Panembal, Kingking, dan Inclok. Each instrument is played by one, so that there are six people altogether. 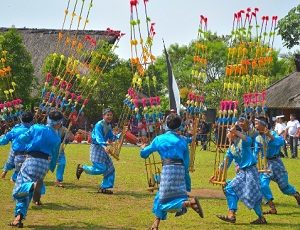 Buncis is an entertainment performance art from Baros (Arjasari, Bandung). The name of Buncis art is related to a text of the famous song among the people, namely cis chickpeas nyengcle …, etc. The text contained in the Buncis art, therefore, the art is called Buncis

At first, Bucis only used at events associated with rice farming, but now, Buncis are used as entertainment too. The 1940s can be regarded as the end of the ritual function in respect of rice beans.

Then three pieces Dogdog, consisting of one talingtit, panembal, and badublag. As time goes by, there are few addition such as tarompet, manacle, and goong.

Angklung Badeng is coming from Badeng, Sanding village, the district of Malangbong. Badeng is a type of art that emphasizes the musical aspect with Angklung as the main musical instrument.

There are nine pieces of Angklung used in Badeng, such as, two Angklung roel, one Angklung kecer, four Angklung indung and bapa, two children Angklung; two pieces of Dogdog, two Gembyung, and one Kecrek. The text uses the Sundanese language mixed with Arabic. In development, now, it use Indonesian too.

Then, the other types of Angklung, such as: 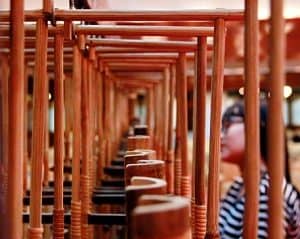 The music of Angklung is slowly began to change and adapt to the development era. Starting from Daeng Sutisna who successful changing petatonis become diatonic scales (do, re, mi, fa, sol, la, si, do) in 1983. Then, the development began to growth, for example in the Asian-African Summit in Bandung, West Java.

Saung Angklung Udjo, an angsana singgasana of Angklung world was built in 1961. Then, its still active maintaining Angklung until this very moment.

Essentially, Angklung is played by shaking it. It will never be change. However, a variety of creative attempts to modernize continues gradually, such as:

One of Indonesian Angklung Facts is its achievements. Even for Indonesian people, still not many knows that Angklung has been known in world stage. One of countries is Europe. Its from Keluarga Paduan Angklung (KPA) SMAN 3 Bandung, one of senior high school choir club. They made breakthroughs to held Expand The Sound of Angklung (ESA). ESA is an music event where KPA has joined three categories in Europe music festival.

10 Reasons Why is Indonesia Important to the World