Breakfast is required people to fill the energy to undergo daily activities. Everyone has their own menu taste. The breakfast menu can also be different based on culture and even country. In Indonesia, breakfast menu can vary. Sometimes tailored to the needs of everyday activities, but there are also because there is no longer ideas to eat. Here is some menus of Indonesian traditional breakfast menu that is common in this country.

Soto, sauto, tauto, or coto are Indonesian specialties such as soups made from meat and vegetable broth. The most commonly used meat is beef and chicken, but some use pork or goat meat.

The way of serving Soto is also different according to uniqueness in each region. Soto usually served with rice, lontong, ketupat, noodles, or vermicelli accompanied by various kinds of side dishes, such as crackers, cakes, chips, sambal, and peanut sauce. There will be added by quail eggs, sate clams, lime, and koya. 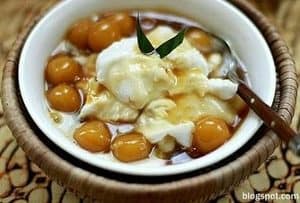 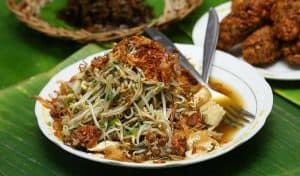 Culinary lovers must know Surabaya has a typical lontong called lontong racing. This name is somewhat unique, because lontong racing is not a brand name but the name of the dish itself. Lontong racing is a dish of lontong berkuah with stuffed bean sprouts, tofu, and lento (beans cooked in a special way). For those who like a spicy flavor can add petis which is typical of lontong racing. 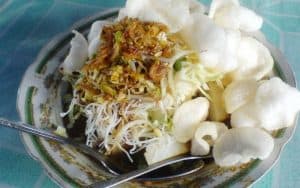 This food is always there at all times. Mau morning, noon, or malem, there must be aja ketoprak cart that hung or streets around the house in Indonesia. Cirebon typical food is also one of the favorite people of Indonesia.

Ketropak is a soft lontong mix, vermicelli, fresh bean sprouts, savory fried tofu, sprinkled with peanut sauce sprinkled with lime juice, and crackers as toppings. All of which if combined can produce miracles in the mouth. The variety of textures combined, the soft, soft, crispy all make the pengencer satisfied and full. Even this ketropak is also often used as a mandatory breakfast menu of Indonesian people. 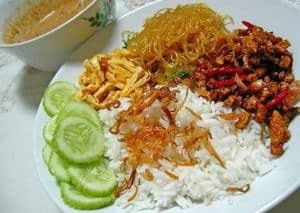 This one food is very popular, it is said that this Malay food is also can be found in Malaysia. Less great what is trying to captivate capabilities of this uduk rice? Nasi uduk is often used as breakfast menu for Indonesian people.
Nasi uduk is a food made of steamed white rice with coconut milk.

The Nasi Uduk, it is seasoned by nutmeg, cinnamon, ginger, lemongrass leaves, and pepper. It is usually served with fried emping, fried tofu, omelet or bacem, abon, orek tempe, fried onion and nuts. In Indonesia now there are many variations of nasi uduk that can be found. Starting from the Javanese, Sundanese, Betawi, or even Sumatra, all have variations of taste nasi uduk according to taste. 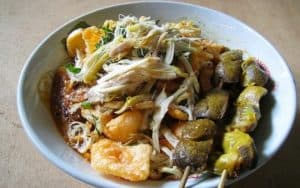 This food is known as the most extraordinary pleasure. Nothing can be beat. As an Indonesian breakfast menu, chicken porridge is a favorite. Same with uduk rice, chicken porridge now also has a lot of flavor variations.

So, chicken porridge is made from white rice mixed with water continue to be stirred until soft. This flaby rice on top is sprinkled with chicken, cakwe, soybeans, crackers, chips, onions, celery, and peppered with thick yellow-green curry sauce. If you like spicy food, you can ask for a lot of sambel from the seller. You will also be offered sate egg quail, intestine, or ati ampela. These satays are the complement of the porridge that makes it more delicious.

This menu is a typical Indonesian breakfast menu, especially the island of Java. There are various kinds of food containing lontong in Indonesia, eg lontong sayur Medan, until Cap Gomeh lontong.

This menu consists of lontong and vegetables made from coconut milk and long beans. There are also lontong sayur are stuffing made of ash and papaya. Side dish depends on your taste. With a little spicy seasoning added, this lontong sayur will fill your stomach until noon later. Do not forget the delicious side dish. Usually the choice of side dishes is chicken or tofu and tempeh. 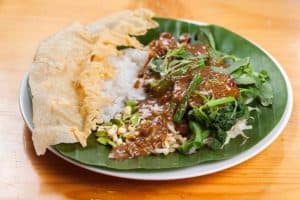 Pecel is a traditional Indonesian dish commonly used as breakfast menu, especially in East Java and Central Java. Pecel is a typical food of Madiun City of East Java Indonesia made from vegetable stew in the form of spinach, bean sprouts, long beans, basil, turi leaf, krai (a kind of cucumber) or other vegetables served with sprinkled pecel sauce.

The concept of a pecel dish resembles a salad for Europeans, fresh vegetables topped with mayonaise. The different is just for the topping, while it uses pecel sauce (sambal made of chili and nuts). Do not forget the crackers and bakwan as a combination of side dishes that fit. 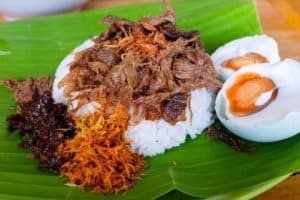 In the area of West Java, breakfast Nasi Krawu has become commonplace. Krawu rice is typical food of Gresik city. This food is a mixture of rice and beef with high oil content.

Some nasi krawu are added with rempelo (intestines, tripe, etc.), cingur, even the eyes of a cow. This food does not use vegetables. The interesting thing about krawu rice is that although this rice is typical of Gresik but all the sellers are Madurese people. Do not forget the complementary side dishes of this menu namely crackers and Sambal. A plate of krawa rice is guaranteed to make your stomach full all day. 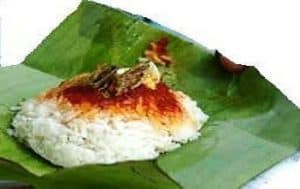 Nasi Kucing (or in Javanese is known as “segå kucing”) is not a particular menu but rather the way of serving rice wrapped mostly found in angkringan stalls. Named by “Nasi kucing (rice for cat)” since it is served in very little portions, such as a menu to feed the cat.

Nasi kucing is a form of rice rames, with various menus: dried tempe, teri goreng, sambal goreng, tripe, milkfish, intestine, head or chicken paw and quail egg quail, which is more delicious if burned before serving. Nasi Kucing is known in various places in Central Java (including Yogyakarta) and is very popular among students because the price is quite cheap for the size of pocket boarding children, but it also feels fit in the tongue of Indonesia.

Those are the menu favorite for traditional breakfast in Indonesia. It is no wonder if almost of them have the big composition of rice, since Indonesia is one of the biggest rice producer in the world. So, while you visit Indonesia, you can find rice everywhere.

10 Most Visited Religious Tourism in Indonesia