Who doesn’t love the island of Bali. The island that has so many things to do, so many things to explore can satisfy anyone who come there. Not only the attractions are amazing, but the other things are also worth noticing, for example, the dishes. The Balinese dishes have the outstanding taste in the tongue of Indonesian them self and also for the foreigners.

They spread all across the island of Bali, some areas have their own specialty. And this time, we want to tell you some more about the traditional Balinese foods that available in the area of Ubud. This area is indeed a  busy one, filled with so many people and so many things arounfd. At least, you should know about what kinds of Balinese food you can find in here. So here they are, the list of traditional Balinese foods in Ubud, Bali : 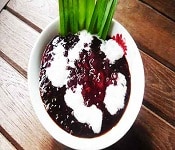 The first and the second one we want to introduce to you are the traditional Balinese porridge. In this first place, we have the Injin Porridge. Different from the other porridges in Indonesia, that has the white color and meaty flavor, this Injin porridge is more like the fruity one.

The color is pitch black, because the usage of the black ketan. If you don’t know what the Ketan is, it’s actually the sticky rice that has a bit sweet flavor, So it’s really suitable for this porridge, also they add the fruit of jack fruit, and some coconut milk to make the taste stronger. 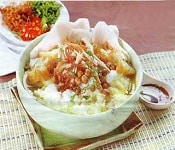 Another one, is the Mengguh Porridge. While the other porridge has the sweet taste, this porridge is having the tasteful flavor. The Mengguh porridge is usually used in some ceremonies in Bali, but it can also be consumed by anyone. Even the tourists, like ourselves.

The porridge itself contains some vegetables, the Urap vegetables, some chicken meats on top, and then added with the chicken sauce to overall of the porridge surface. The taste is so great and complete, with the addition of some chips, or as you can call as Kerupuk. 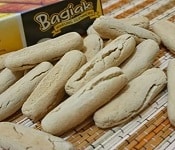 While the other foods are usually eaten while sitting around, this Bagiak is the thing that you can eat anywhere else, in any condition even while walking and enjoying the tour. Why? Because, it’s actually a snack that you can enjoy all the way. Usually it’s packed in plastic, for portable reason.

This Bagiak is made of Sago, and taste really crunchy when you firstly bite it. But then, you’ll realize that it has the soft texture on the inside. It’s such a good snack to bring around, especially if you visiting the other locations in Bali. It’s a great companion. 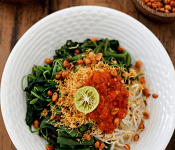 After the Bagiak, we’re gonna fill our stomach again with something that you can call as a dessert. Not like the usual dessert that has the sweet feels all the way, this one is also has the tasteful flavor for your tongue. It’s also can easily be found in the area of Ubud, Bali.

The name of the food is Serombotan, it contains a lot of good nutrition because of the vegetables and the nut sauce itself. The nut sauce gives the food the familiar Indonesian taste for you. I’s also has such a cheap cost, with much goodness inside. 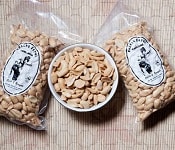 The next one is also the same as Bagiak, which can be considered as a snack to bring anywhere. The name is the Bali Salty Nut, the very good snack to bring when traveling around Bali. Usually it’ll be packed in a plastic, just like Bagiak. There’s the smaller version of it, making it more portable than the big one.

Like its name, the taste of the nut is indeed very good, and very salty. But even though it has the salty flavor, the flavor itself doesn’t exceed the tasteful flavor that also can be found within. So, just grab one for your next trip, it’ll be good. 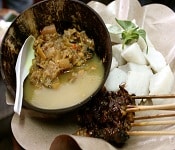 In the sixth place, we have the Jukut Ares. This food is very easy to find in the area of Ubud Bali. Not like the Serombotan, the food with a lot of vegetables, this Jukut Ares is basically contains of a young banana tree, and the other Balinese traditional spices called Base Gede.

Not just those two compositions, the Jukut Ares also has some meats for us to eat. They combine it together with the tree and spices, creating one of the best foods in Bali. Usually it came with pork, but if you’re a moslem, you can choose the chicken or beef. 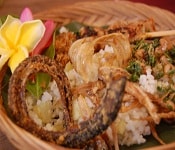 If rice is too mainstream for you, then you can try this Sela rice. Not like the ordinary rice, the Sela Rice is basically the combination of cassava that used with a small portion of rice. Thus, the Sela rice created. It has so many great benefits for body metabolism, also, a very good taste.

This is a great news for tourists who have some diet programs, so now they can eat some rice without worrying about the high level fat they’ll get. The low level of fat is pretty useful to maintain the body’s weight, and to increase some energy for the next trip. 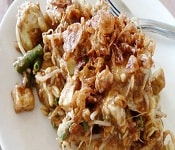 Another vegetables food, what we have here is the food called Tipat Cantok. Basically you can find the Tipat Cantok almoste evrywhere in Bali, even in a five star hotel. It’s not so different wt the one that sold by the street vendors, maybe the price is not the same.

But wherever you get it, in the street, in the restaurant, or even your comfy hotel, the taste is almost the same. The vegetables are really refreshing, especially with the addition of Tipat. The Tipat itself is pretty filling your stomach. But when combined together, they’re wonderful. 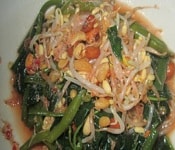 Next one on our list of Balinese traditional foods in Ubud Bali, is the Lontong Jukut Serapah. If the Lontong you’ve seen in the other areas like Java has the oval shape, the lontong in Bali has the triangle shape, almost like ketupat. But there’s  oval version anyway.

It’s almost the same with the Javanese Pecel, the Lontong here is actually the main difference. All those vegetables will combine with Lontong, and on the final step, they will be added with a sweet thick nut sauce. The taste? Incredible. 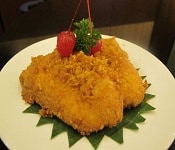 We go to the snack section again this time. Not crackers, but it’s actually a fruit! The name is Godoh Gedang. Basically it’s a fried banana, a Balinese version one. You can easily find it in the nearest coffee shop in Ubud, called Warkop or Warung Kopi. There’s a lot of them there.

Maybe you can add some refreshment, like tea for example. Or, you can combine it with something special, like ice cream for example. Choose your best variants of Godoh Gedang, or create the new one to satisfy you. 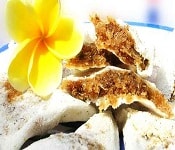 Talking about another snacks, we have some more here, one called the Jaja Bendu, and the other called Jaja Wajik. Let’s talk about the first one. The Jaja Bendu is the old Balinese snacks that taastes really good. The making of it is also really simple.

You can easily find this Jaja Bendu in the traditional markets around Ubud area. There’s a lot of traditional markets in there. Or you can make it yourself, by combining the Balinese sugar, coconut sprinkles, and cover those two with banana leave. That’s it. 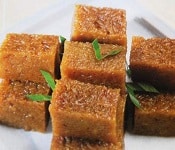 The other one Jaja Wajik. This one is also has the sweet taste, but it came with different texture. This Jaja Wajik is way more sticky than the first Jaja. But it tastes good anyway, so ma people love this until now. It can also be a good gift from Bali.

Usually the Balinese people serve this Jaja Wajik in some certain ceremonies, like Wedding. The Jaja Wajik itself is always emptied because of its attractiveness. For you who want to get it, it’s available in almost all the food stores in Bali. It’ll be easy to find one. 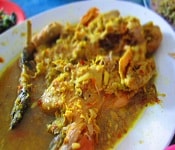 The last but of course not the least, is the famous Chicken Betutu. Who doesn’t love it? This is like the true taste of Bali. The spices so rich, and when combined with the Balinese chicken meat, it became the best Balinese dish.

It’s a must, to taste the Chicken Betutu at least once in your life. Especially for the tourists in Bali, it’ll be a great experience to taste one of the best wonderful traditional Balinese foods. The price is nothing compared to how delicious the taste is.

So, those are 13 of them, the traditional Balinese foods that available in Ubud area of Bali. So you should take a note and check what kind of food you want to try while visiting there. There’s the spicy one, the sweet one, and also don’t forget the salty one. Pick whatever you want to satisfy you, and grab them all if you can! The price won’t be a huge problem, because they’re also pretty cheap! So, don’t waste your chance in Ubud, and try to explore all the flavors of Bali!

20 Common Rules for Marriage in Indonesia