Yogyakarta is a city that is always praised for its culture and fine arts. However there is another aspect to Yogyakarta that should not be left out. Yogyakarta offers a wide array of culinary delicacy. There are so many traditional food that the city has created. Below are 25 Traditional Food of Yogyakarta. Read on to find out what they are.

Tiwul is a very traditional food of Yogyakarta that has become popular in other cities too. Tiwul is made from pounding cassava and then drying it afterwards. The cassava is then called as gaplek.

The pounded cassava is steamed with brown sugar already added to it. The steaming ends when it is fully cooked. Young, grated coconut is added on top of it making it taste a bit savoury.

Jadah Tempe consists of two kinds of food. The first one is made from rice that has been pounded and molded. The second one is tempe bacem. Tempe bacem is tempeh that is marinaded for hours with a lot of spices and sugar.

After being marinaded, the tempeh is usually fried. The result is sweet and savoury tempeh. Both of those food are eaten together. Sometimes the tempe bacem is replaced with tofu.

The name Pathok comes from a place in Yogyakarta where the food was first made. Bakpia Pathok is a rounded cake roll that is often small.

Inside the cake roll there is mung beans. The mung beans are already cooked and pounded until they become soft enough as a filling.

Other fillings for Bakpia Pathok also include cheese or chocolate. This traditional food is very popular and sold at many shops all over the city. It is so popular that a lot of people would buy this food as souvenirs.

Cethil is a traditional food that is made from sago flour. Food colouring is often mixed into the flour to make Cethil looks colourful. The texture of Cethil is chewy and the taste is sweet. Cethil is often served inside a small, banana leaf. Grated coconut is added to Cethil.

The savoury coconut balances out the sweet flavour from Cethil. Cethil is usually sold inside traditional markets of Yogyakarta.

The shape of Yangko is square and small. Inside the Yangko, there is peanut filling. The filling for Yangko can be fruity too such as strawberry or melon. Yangko can be found in most food shops in Yogyakarta.

Gatot is a traditional food that originated from Gunung Kidul regency in Yogyakarta. Gatot was first made from an unsuccessful Tiwul.

From a failed Tiwul, the cassava is dried and then steamed for longer time. But if a fresh cassava is used then it is usually dried for up to 7 days until the cassava turns black.

After the cassava turns black, Gatot is ready to be made. Cooking Gatot is the same way as cooking Tiwul. The way to serve Gatot is also similar, using young grated coconut on top.

Before frying the grasshopper, it is first given basic spices such as garlic, salt, pepper and chili. After that, the Grasshopper is fried until it becomes crispy. Fried Grasshopper is sold in shops or by the sides of the roads.

In the Bantul regency of Yogyakarta, there is a very sweetly flavoured traditional food called Geplak. Geplak is mainly made from young coconut. The coconut flesh is soaked in coconut water until all the oil is gone. It is then washed and grated.

The grated coconut is mixed with sugar and a little bit of food colouring. The mixture is cooled and then packed for shops. Geplak comes in a lot of flavours too such as ginger or strawberry.

Kipo is another traditional food made with glutinous rice flour. Pandan leaf is added to the flour to make it green. They are mixed with grated coconut and brown sugar. The mixed flour is then folded and then heated over the stove.

Kipo is green in colour and it is also small. The average length is no bigger than a thumb. This traditional food came from Kotagede regency in Yogyakarta.

Adrem Cake first originated in Bantul regency, Yogyakarta. It is a simple cake made from rice flour, grated coconut and brown sugar.

The brown sugar is melted first and then mixed in with the rice flour and grated coconut. Once the dough is done, it is cut into tiny pieces.

They are then fried in hot oil until the colour becomes golden brownish. When they are fried, bamboo sticks are clipped between the dough to make a unique shape in the middle.

Gudeg is a very popular traditional food from Yogyakarta. It’s a dish made with jack fruit that has not fully riped yet.

The jackfruit is boiled with coconut milk and a little bit of brown sugar. Spices such as garlic, bay leaves, shallot, teak leaves, galangal and coriander seed are usually added to the dish.

This soup is a local delicacy of Yogyakarta. It is called as Sup Kembang Waru in Indonesia. Unfortunately, this dish is a rare one. It is only served during special occasions such as a wedding.

Apparently, one can taste this dish at Beringharjo Market. Hibiscus Flower Soup is a soup consisting of vegetables such as carrots, beans, shredded meat or chicken feet.

The one special component is a dumpling filled with chicken. The dumpling resembles the shape of a hibiscus flower. 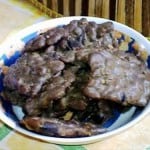 The texture becomes soft but crunchy at the same time. Tempe Bengkuk is locally from Kulon Progo regency in Yogyakarta.

Geblek is another traditional food that originated from Kulon Progo regency, Yogyakarta. Geblek is a type of food made from tapioca flour. The shape of Geblek is unique. It is round but it also resembles the shape of the number 8.

The main ingredient is garlic. It is added into the flour to give it taste. The texture inside is chewy but when it is already fried, it becomes crunchy on the outside.

Geblek is often eaten with peanut sauce. Geblek can be bought in shops. It is also sold in the form of dough so you can fry it by yourself at home. (Also read: Sundanese Cuisine)

The next traditional food is called Gethuk. Gethuk is a popular dish in Yogyakarta. It is so popular that it is also sold in other cities in Indonesia.

Sugar is added to give it a sweet flavour. Gethuk is usually served with grated coconut. People would often sell Gethuk using carts. The carts is moved around manually around a neighbourhood.

There are also more food that you should know about. Below is an additional list of traditional food of Yogyakarta:

All of this traditional food in Yogyakarta is worth the try. Some are available in shops and you can buy them for family, friends or yourself.