10 Things to Do for Nightlife in Solo Indonesia

Fit with its motto, Solo or sometimes called Surakarta is the spirit of Java. Although, not as popular as Yogyakarta, Solo is not just an ordinary city. It is a unique place with a passion, lots of cultural heritage and hospitality. In addition, Solo is an exciting city for shopping, tasting Javanese culinary, and enjoying some festivals.

The city is located in a strategic lane, namely the meeting path from Semarang and from Yogyakarta to Surabaya and Bali. Solo is also well known for its world-famous batik. When you visit Solo, do not forget to do some exciting activities. One of which is enjoying the nightlife in Solo Indonesia. Here is the list.

Almost similar with the South Square in the city of Yogyakarta, Alun-Alun Kidul Solo also offers a sensation of the evening tour is no less interesting. The place is located on Gajahan Pasar Kliwon street Surakarta. This place is the backyard of the Sultanate of Solo Sultanate which transformed into a beautiful and fascinating tourist spots.

Not only offering a variety of typical Solo snacks, it also offers neon rickshaw entertainment, bath balls, odong-odong, mini trains, balloon palaces, and much more. It is suitable to spend time with family in this place. You could also enjoy some colorful lampions that are available in some spots of Alun-Alun Kidul Solo. Don’t forget to bring your kids too. 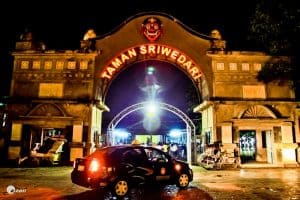 This one park is located in the middle of the city and became one of the tourist centers in the city of Solo. Sriwedari Park has a variety of facilities and stage performances that can be enjoyed by tourists such as Gedung Kesenian Surakarta, Joglo Sriwedari, Sriwedari People’s Amusement Park, Wayang Orang Sriwedari Building, and Plaza Sriwedari.

From morning till night, you can see quite a lot of the activity of the passers-by in this complex. You can also do some random activities like chatting with your friends or family. You can also enjoy the show that performed in Sriwedari Park. Then you can continue to travel around this city with family. 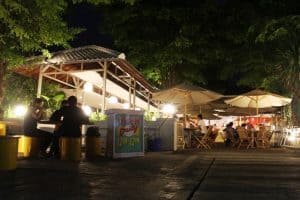 Currently, the Playground becomes one of the most hoisted hangout places around Solo. Not only because of the food, the facilities provided are also numerous. One of them is a computer facility that can be used to play games. With their slogan “Eat Talk Creative” make the Playground as a gathering place of various communities in Solo coupled with its wide enough place.

It is located in Kampung Badran, exactly on Jalan Kenanga 163, Badran, Purwosari, Laweyan, Solo. Here you can hang out with a cool interior café. Digital corner is also provided for you who want to find inspiration, perfect for art workers or workers who need creativity. In the Playground atmosphere is supportive for you who still want to work while looking for a new atmosphere. There, you can order the food and drinks available. 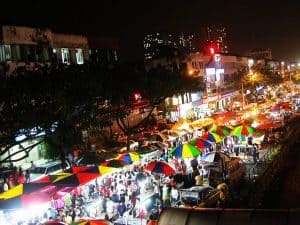 In this place, you can buy many things that you like. There are two lanes of cone-shaped tents mounted along Jl Diponegoro, Solo City. Many items are sold in the booths, especially goods with Solo characters such as batik, various knick-knacks, fashion, and traditional toys. It is located in the heart of Solo that makes the place is always crowded by citizens.

The location is very strategic, in addition to being in front of Pura Mangkunegaran also still around the main line of Solo, Jl Slamet Riyadi. However, do not forget, the night market is only there when Saturday night aka Saturday night only. Ngarsopuro usually crowded by visitors, both buyers and residents who only wash the eyes, at 19:00 pm until 22:00 pm.

Visiting Solo seems incomplete when not trying its typical cuisine. One of the famous culinary in Solo is angkringan food. Angkringan is actually a food peddler who using a kind of small house cart and sell various kind of traditional food in a very affordable cost.

Nowadays, more and more angkringan appear more fresh with modern concept with strategic location and comfortable. One of them is where to eat this one. Located not far from Balapan Station, Solo, you will feel a strong vintage in this restaurant. For food, you do not have to worry! Lots of food you can choose. Like nasi kucing, nasi gudeg, nasi oseng lombok ijo, nasi bonaga and much more.

Martabak is a stuffed fried flatbread that originated from Arab. However, it has become really well known in Indonesia. Day by day, the martabak has been varied with so many toppings. You can find the new version of martabak style in Markobar.

Markobar had become the Netizen’s hot topic because the figure behind this cool food stall is the son of Indonesian President, Joko Widodo, names Gibran. He began to launch this business since 2015. It now has begun to expand to Semarang, Jakarta and Yogyakarta. Markobar or Martabak Kota Baru has a mainstay menu of sweet martabak with 8 toppings and accompanied by temulawak and Blontea tea. 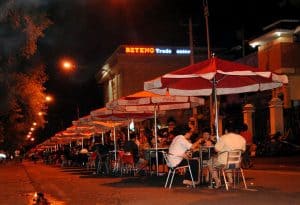 There are many culinary are sold here, ranging from typical culinary Solo such as tengkleng and satay buntel. In fact, you can find Indonesian culinary like meatballs, soup, or ribs soup. Galabo can be a solution for dinner because it has many culinary options there. In addition, a fairly cheap price will also allow you to eat more here. 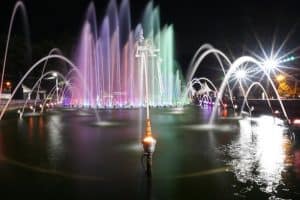 One of the famous nightlife tourism is Tugu Manahan. Around the monument there is a fountain, gazebo, and various garden ornaments. In addition, in the middle of the pond, exactly on the left side of the statue of Bung Karno has added two fountains that look amazing. Manahan Monument Solo is not only facilitated fountain, but also equipped with animation and sound. The big changes from this one monument even more attracted the attention of many people. Almost every night, the area is always crowded. Not just young people hanging out, but also some foreign tourists with this new fountain in Solo. 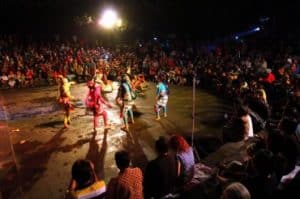 Sendratari Ranayana is a monthly art show in Solo that you should enjoy. Performances are held every full moon always brings a series of epics Ramayana. Sanggar dance studios in Solo appear each month. They bring different titles but stay sustainable.

Sendratari Ramayana became one of the agenda of City Government (City Government) as an effort to promote Solo tourism to tourists, as well as to boost the existence of Taman Balekambang. This staging is usually held at the Open Theater. However, if there are weather constraints and the presenter has a different lighting concept, staging will be held at Gedung Kesenian Balekambang. The show usually starts at 8 PM. 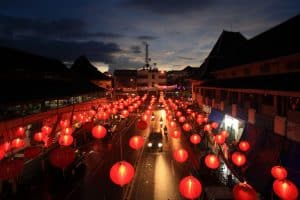 Pasar Gede is one of the most famous areas in Solo. It is a Chinese building. Although the area is just crowded during the day, but the atmosphere at night is quite interesting and fascinating. You can take pictures in front of the main building. It is also recommended to take pictures near the monument in Pasar Gede.

The buildings and monuments near this place are also interesting for photo objects. For those whose hobby is photography can try to find the best corners to get the best photos. In addition, Chinatown region will also be more interesting when there is a certain celebration with decorations.

Those are the things you can do for Nightlife in Solo Indonesia. For those foreign tourists who like to visit Yogyakarta, you could also try to visit this place too. It is not too far from Yogyakarta. You will need less than one hour to reach this city if you go by train from Yogyakarta.

The Brief History of Indonesian Architecture