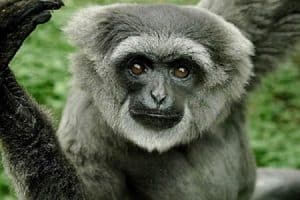 The Javan Gibbon has the Latin name “Hylobates moloch”. It is a typical small Javanese monkey, where its features have no tails, gray hair and has a beautiful special sound. In addition, the movement is also very agile. This animal also one of Endangered Animals in Indonesia.

One of the endemic primates of West Java which existence is on the list of endangered species is the Javan gibbon (Hylobates moloch). These adorable primates have diminished in their natural habitat. It is estimated that only about 4000 left are still alive in West Java. In addition there are 25 other primate species that are almost extinct of the orangutan Sumatra, Kukang Java, and Simakobu. The rise of wild trade cases, massive expansion and uncontrolled expansion of plantation land became one of the factors of extinction.

The Javan Gibbon is a small, tailless species with gray hair and has beautiful singing. The fur of the Javanese Owa, whose small body is slim and sexiest than other ape types and its nimble moves makes the Javanese gibbons look flirtatious. But do you know that this little monkey is a primate family of the Hylobatidae tribe. Now, the Java gibbons are the most rare species in the world. This is because the Java gibbons are endemic animals that can only be found in Java.

The hair around her face was white, the top of her head darker, and her face was black. Apparently, the more mature Javan gibbons, his face will become brighter. It is a small primate with a body length of only about 80 cm. Her body is smaller, slimmer and sexier than the other apes that tend to be fat. On the body of the Javan Gibbon is covered with silvery gray feathers while on the black face face. Javan gibbon does not have a tail.

The Javan gibbon belongs to a true monkey species (arboreal monkey) because for most of its life, these primates never descend from the top of the tree. Uniquely, although known as the king of the tree, the Javan Gibbon actually includes an ape that runs erect. It does not use the four arms and legs, but rather rely on both legs to walk.

Javanese gibbons is do the activities during the day. They will start to be active in the morning around 05.00. And it will reach the peak between 08.30 until 12.00. The activities will start again at around 14:30 to 17:30 to find a tree that can be used as sleep. One of the typical Javan gibbons habits is to bring out chants (typical sounds) in the morning when they begin their activities.

Unlike the larger apes like gorillas, the Javanese gibbons do not build their own nests. Javan gibbons have ischial callosities, pads without nerves attached to the hip bone allowing them to sleep in a sitting position. It is often found sleeping in a sitting position in a branching tree with its head tucked in its lap and its long arms wrapped around their knees. A group of gibbons usually sleep on the same tree for some time. Including diurnal primates, active gibbons are about ten and a half hours a day.

One of the conservation measures to prevent the Java Owa from extinction is the establishment of the Bodogol Javan Rehabilitation and Rescue Center in Gunung Gede Pangrango National Park. In this rehabilitationn center, a number of Javanese gibbons are maintained. Then an intercommunication effort is made between Javan gibbons before being released in the wild. This is done with consideration other than monogamous animals, Java gibbons will not be able to survive if released in the forest without pairs due to the marriage process and the protection of the territory.

The favorite foods for Javanese gibbons are fruits which they consume during hunting on the day. Beside fruits, gibbons also consume young shoots, leaves, seeds, skins, and flowers. Eggs and insects are also part of their diet. They sometimes eat insects as a laxative. It is a pretty unique of their eating habits, isn’t it?

Having long sleeves allows the gibbons to swing from one branch to another or from one tree to another easily. Its long fingers allow them to be able to hold the branches well. This swing arm movement is called brachiation, allowing them to swing as far as 15 meters above the tree at a speed of about 35 miles per hour. In addition to swaying, the primate is also famous for the movement of both legs (bipedal). Owa walks with both limbs that are assisted by their arms to maintain balance. This javan gibbon will rest his weight on his hands and then swing his legs. Because they can’t swim, the javan gibbons usually choose to avoid water.

The main cause of the increasing scarcity of the Javan gibbon is the reduced habitat due to deforestation and conversion of agricultural land. Whereas the Javan gibbon including animals that are very ‘love’ territorial where although the territory (territorial) began to run out primates are almost extinct is still unmoved and do not want to move. This could potentially make the Javanese Owa die of hunger. In addition to the loss of forest as a habitat of the Javan gibbon, poaching also causes the increasing scarcity of Javanese gibbons. Often the hunting is done by shooting dead the parent of Javan gibbon to take his son.

As the population declines, IUCN Redlist incorporates the Javanese Owa under the conservation status of “Endangered” (Endangered Species). In addition, CITES also includes this rare primate in the Appendix I list which means it can not be traded. Because these animals are rare and humorous, many people are then illegally trading animals.

The Javan gibbon is a type of arboreal primate living in tropical forests. The food is fruits, leaves, and insects. Javan gibbons are a vital part of life support systems because these primates help spread seeds to forests. When the seeds are dispersed, the growth of biodiversity in the forest will improve. This is nothing but the help of this cute animal.

Those are the facts of Javanese gibbon. Unfortunately, although this animal is on endangered status, there are still a number of people who still keep this animal at home as a pet. The governments should work hard to socialite about the lists of endangered animals that couldn’t be kept at home.

10 Family Activities in Bandung You Must Try

17 Best Mountain Views in Indonesia You Must See