Do you know owl? Owl leaves a strong impression when you look at this bird for the first time. This bird looks quite scary and it has a pair of sharp eyes with sharp looks. Moreover in Indonesia owl is called as burung hantu (ghost bird) due to its scary characteristic.

Owl itself is a bird which is listed in the Order of Strigiformes and this bird usually comes out at night (Nocturnal). In the Western countries, owl is considered a symbol of wisdom otherwise in Indonesia it is considered as a bird of catastrophe. However the population decreased now, here are the list of rare owls in Indonesia. 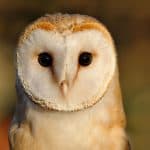 This owl is also known as Tito Owl or Javanese Serak or Barn Owl. This owl has a bigger body compared to others and its upper body colored dark yellow brownish with fine dots meanwhile its bottom is colored white with black dots. This owl has height for about 34 cm.

The interesting feature of this owl lies in his face, his white colored face looks like a heart shape. Tito Alba owl does not live anywhere, its habitat is in tree-lined area on the edge of the forest, farm, and city park whose the height reaches 1600 m above sea level. This type of owl can be found all over the continent, except Antarctica. 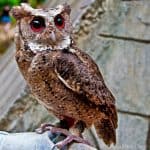 This bird is  also known as Reddish scops-owl and has the latin name Otus rufescens. This owl has a small body and the height is approximately 15 to 18 cm.

The habitat of this owl is in a lowland area with many trees, hills, and primary and secondary forests. Generally its habitat is in the lowlands however some of this species lives in high area.

Some of them live in the areas with altitude 1350 m above sea level. Red Celepuk Owl can be found in Sumatera, Java,Kalimantan, Thailand Peninsula and malaysia Peninsula. This reddish owl likes to eat insects, especially grasshoppers and crickets and crabs.  Read also Rare Fishes in Indonesia 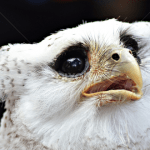 Hingkik or Beluk Jampuk has the Latin name Bubo sumatranus. Hingkik is known as  the Barred Eagle Owl or the Malay Eagle Owl in the international word. This type of owl is one of the owl species that can be found in Indonesia.

Hingkik has a large body with length reach 45 cm, a dark gray hair with horizontal ears striking, and its upper body is colored blackish brown, all striped yellow old smooth, and has white eyebrows. Read more about Dangerous Animals in Indonesia

Meanwhile the lower body is colored gray-white with a thick black stripe.The habitat of Hingkik is in the tropical forest  and sub tropical lowland with a height up to 1000 m above sea level. This owl eats  large insects, small mammals, reptiles, small fish and small birds. The distinctive behavior of Hingkik is that they enjoy bathing in a pond or river. 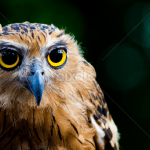 Bloketupu is also known as Buffy Fish Owl or Malay Fish Owl. This species is considered as medium-sized owl, it has unique feather on the head that resembles a leaf with horizontal direction.

Female bloketupu usually bigger than the male.This nocturnal bird lives in dark places like the  depths of the forest, and it likes to wander alone. Read more about Animals of Borneo

Bloketupu eats fish, reptiles, frogs, small mammals, and insects. Sometimes they also eat bats and carrion. Bloketupu lives in the area which near with water source. They can be seen around the people’s home and mangrove forests with altitude reaching 1600 m above sea level. 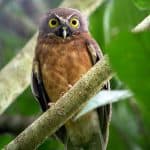 This owl is Indonesian endemic species, it is known as Javan Owlet in international words. Javan owlet is an owl species which has small size.

Even the adult javan owlet has length less than 24 cm with red brick colored feather, there are also stripes on its feather. Its eyes are have yellowish brown color, its beak has green color and its feet are green.

The habitat of this owl is in the rimary forest, secondary forest, hill, lowlands, and even in populated areas. Justt like the other owls, Javan Owlet is very active at night and it is also active during days. This species can be found in Java and Bali regions only. 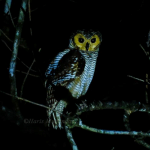 Strix Seloputo is a large-sized owl. It has distinctive feature because this owl has no ears. The bird’s face looks yellow colored but it is actually has red brick color if you look at it closer.

Another morphological feature that is the upper body is brown red brick marked thick with white spots and black border. Read more about Endangered Animals in Indonesia

The lower body has white, red brick and has dark brown stripes. This owl likes to visit the lowland forest and trees near the village. Some people have Strix Seloputo in home as a pet that is why this bird is getting rare because people are attracted to have it.

Owls are hard to find because it is active at night however that is the main attraction of this bird. This scary bird is being a pet nowadays because some people are considering this bird as a cute and unique bird. But still, owl needs to be protected because the population in Indonesia is decreasing.

20 Recreational Activities in Jakarta You can Enjoy