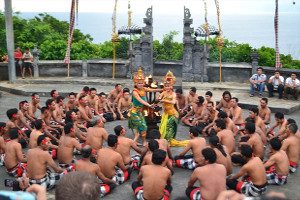 Monkey dance is one of Bali performing art presentation that is known throughout the world as it’s integrated the complicated level of percussion vocal sound, movement, and folklore. Monkey Dance or Kecak dance is one of the kinds of traditional dance from Bali which is very impressive to the audience. The uniqueness of the movements and the showdown in the show made this dance very special for both domestic and foreign tourists who witnessed it when visiting the island of Bali.

Not surprisingly, the dance created by Wayan Limbak is very famous all over the world and is known as the Monkey Dance. This is because one of the scenes in the dance show uses the fire property as well as the main character in the performance who plays Monkey by wearing a mask. This dance is sometimes regarded as a form of gamelan performance and is aptly named for the continuous voice of Cak that’s sounded throughout the dance art performance.

This dance that is often played by many men is now one of Bali’s iconic culture that is quite interesting to watch by tourists who visit Bali. Although the movements performed by dancers are very simple, the performances of dancers are varied ranging from tens to thousands of people making the same movements that are quite unique and interesting. No wonder that most young males there can perform Kecak dance movement by sitting in a circle and shouting in unison. Traditional dance performances of Kecak can easily be seen in Bali’s areas such as Uluwatu, Garuda Wisnu Kencana, Ubud, and Bali’s Gianyar. 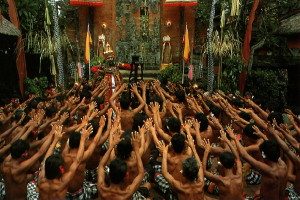 Dance, art and other interesting performances are widespread in Bali as it’s heavily connected to their lifestyle and also their religion. Kecak Dance is a traditional art of typical dance drama from Bali. The dance describes the story using the Puppet, especially the Ramayana story which is performed with art and dance. This Kecak dance is one of the most famous traditional art in Bali. In addition to being a cultural heritage, Kecak Dance is also one of the attractions for the tourists who come there.

According to historical sources, Kecak Dance was created in 1940 by a Balinese artist named Wayan Limbak and Walter Spies a German painter. This dance is inspired by the ritual Sanghyang and parts of the Ramayana story. Sanghyang ritual itself is a dance tradition acts in which the dancers are in an unconscious condition and communicating with God or the spirits of the ancestors then convey their hopes and message to the community. The name Kecak Dance itself is taken from the word “cak..cak..cak” which often shouted to the members who surrounded the dancers, hence this dance is known as the Kecak Dance. 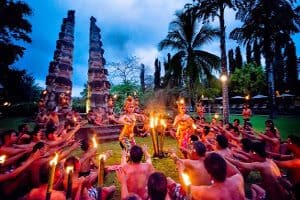 At the beginning of the Kecak dance appearance, this type of dance was created accidentally and taken inspirations from a traditional dance move known as Sanghyang. Sanghyang is a type of Balinese traditional dance performed in religious ceremonies for the purpose such as resisting and expelling a disease outbreak.

In the show, the dance starts with by burning the incense, then the dancers enter the stage while pronouncing the word “cak..cak .. cak”. Then they formed a circular line, and the middle area is used for dancing by the main actors. In this Kecak Dance performance, the dancers play the acts in Ramayana stories, such as Rama, Shinta, Rahwana, and other figures. The movement in the dance is strictly based on the rhythm, so the dancer is more flexible in moving and focusing on the storyline.

Sometimes there are also some funny scenes that are performed by the dancers in the middle to attract the crown attentions. Additionally, some attractive scenes are also displayed as spitting fire and other attractions. This is what makes Kecak Dance as a sacred act but also entertaining performance.

The Kecak dance is one of a unique dance artistry. In contrast to the art in general, in Kecak Dance performances they did not use any musical instrument. This Kecak dance is only accompanied by the shouting sounds of members who surround the dancers and the ringing metal sounds tied at the feet of the dancers. For members of the dance group then it is usually made up of 50 people or more. In the dance member also consists of members who served as, tone arranger, solo developer, and Mastermind who arranged the storyline.

In the show, the dancer used costumes according to the play. This costume is similar to other Wayang, but with a typical Balinese style. While the dance members usually only wear black pants and black-and-white plaid shirts. Additionally, some accessories like flowers are tucked in one of their ears.

Kecak dance also has a distinctive property that is characteristic of a traditional art performance. The properties commonly used in the show are as follows:

The Purpose of Kecak Dance

The dance performance of Kecak functions as a cultural preservation of the storyline presented in staging acts that usually revolve around the story of the abduction of Dewi Shinta by Rahwana, and Rama’s effort in liberating Dewi Shinta from the hands of Rahwana. Kecak Dance is a dance that comes from the creation of the ceremony of Sanghyang. The original creator of this dance took inspirations from this sacred ceremony to create the movement of Kecak Dance that functions as follows.

1. As a means of entertainment

The creation of this dance movement is consciously carried out to show a typical Bali art to the general public. The dance is intended as a means of entertainment for both the local community and for tourists coming to Bali.

2. The efforts to preserve the culture

In the dance, there are also stories that are implied from the beginning till the end of the show. The puppet story enacted in the dance movement is a new innovation in the preservation of Hindu culture, especially in the Ramayana story.

There is hardly any musical accompaniment for the Kecak dance except the sound of the metal tinkle and the sound of the dancers who are “cak-cak-cak-cak”. Although there is no special musical instrument being played the enthusiasm to watch this art performance is very high as captivating and sometimes compact voices create unique tunes for listening to the dance movements performed by dancers.

The development of Kecak dance from the beginning of creation until now can be said to be quite impressive. Kecak Dance is one of the attractions for tourists who come there. In Bali itself, almost all areas have their own Kecak Dance groups. In its development, Kecak Dance is also experiencing enhancements, both in terms of performances, number of dancers, stories, and plays. This is done as an effort by artists to make Kecak Dance performances more popular and known by the wider community there.

In addition to the enthusiastic Bali community towards the art of dance from Wayan Limbak, the tourists visiting Bali are also very interested in watching this art movement. No wonder local governments make this dance as one of the arts and cultural icons of the region. This traditional Balinese dance serves as a means of entertainment as well as the pursuit of Hindu culture in Bali.

The monkey dance as its widely known is a cultural heritage that’s unique to Bali who portrayed themselves as a place where culture and arts are widespread in implementation. Thus it can draw crowds from the foreign country who would come and enjoy the best performing arts Balinese can offer to them. This dance needs to preserve and became the identity that is uniquely Bali.

History of Capital Market in Indonesia

4 Ways How to be Safe in Bali – Useful Tips