Indonesia is a country rich in tradition, customs and culture, as well as a variety of tribal languages as well as regional dances. Not only 1, 2 but hundreds of kinds of cultural diversity that became a tourist attraction and beautiful art and also unique. One example is the art of dance, a beautiful and beautiful motion culture, combined with the nuances of traditional music that is melodious and also beautiful.

One of the kind and variety of traditional dance in West Java, which is the attraction and also the art of beautiful dance culture. West Java has a variety of performing arts that we need to know and together we preserve to not be destroyed by western cultures that are not necessarily in accordance with the personality of the Indonesian Nation. 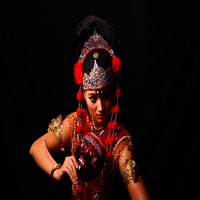 Mask Dance is a traditional dance that has been known since ancient times, this dance is famous in the area of Cirebon.

This dance is believed Cirebon people have existed since the Sultanate of Cirebon. Called from the mask because the dancers use a mask when in action. At this Cirebon mask dance performance, the dancer is called a dalang.

This is because at the dance performances mask dancers usually use some masks that have different characters.

In general dance, mask dancers use 3 masks that are used simultaneously. Beginning with a white mask, then blue and covered with a red mask. Each mask color masking is worn, the gamelan is sung even harder as a symbol of the character played by the characters. 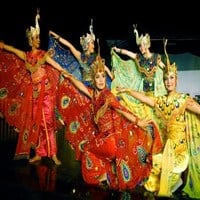 Pull Peacock was created by an artist Raden Tjetjep Somantri in 1950. But in the course of time and history of Peacock Dance has experienced several revisions such as Peacock Dance that has been remade by Irawati Durban in 1965.

Named peacock dance because this dance depicts beauty and the beauty of peacocks. The dancers of this traditional dance use a costume that is also similar to peacock feathers.

This dance is very beautiful, especially the costumes are unique and also interesting, the graceful movement of dancers increasingly make this dance to be amazing. 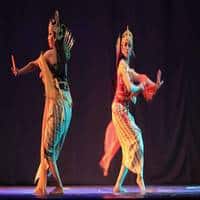 One of the traditional dance in West Java is the wayang dance began to be known by the society during the time of Cirebon Sultanate in the 16th century by Shaykh Sharif Hidayatullah, which was then distributed by the traveling artists who came to Sumedang, Garut, Bogor, Bandung, and Tasikmalaya.

Called wayang dance because the dancers wear costumes and perform a dance movement that depicts a character or a puppet character known to the public in West Java. Wayang Dance can be played singly, in pairs or in mass. 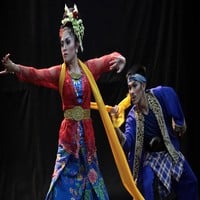 Tapu tilu performances are usually done in open area both inside and outside the room, ronggeng usually will dance around a light legged (Sunda = torch).

At the first Ketuk Tilu show performed tatalu (sounding instrument) in order to call the audience.

This dance is performed as an opening dance after the audience is busy and ready to see this dance art. Ketuk tilu dance is generally held in conjunction with beautiful ornamental lamps or interesting traditional lights called oncor. The movement of the jaipong dancer is called jajangkungan and wawayangan in Sundanese language, and is accompanied by beautiful and beautifully sounded gamelan music. 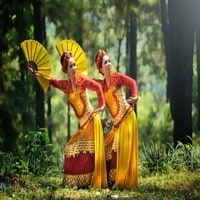 At the beginning of its development jaipong dance is also called tapu ketuk.

Jaipong or jaipongan dance is very famous in mainland Sunda, because this dance is a beautiful dance with movement and music that accompany it very beautiful to be heard. This dance is identical with the movement of the body and hands are aligned and distinctive. 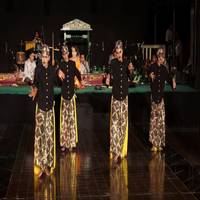 Initially known as tayub or tayuban dance is a dance performed by the frightening (officials).

From his study of dance, he composed and tidied up Tayub’s dance which in his time was often performed by dancers who had been influenced by booze and dance without any basic movement.

In order to arrange the minds of the wars, R.Sambas Wirakoesoemah established a dance school. And the dance has grown to date and many have learned about this dance. 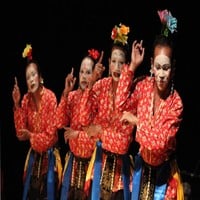 Here is one of the traditional dance in West Java is Ronggeng Bugis or Dance Telik. This dance is a comedy because it is played by male dancers as much as 12 to 20 people with makeup and dance style like women.

But make no mistake despite the style of women, the makeup is used by dancers do not look beautiful it can be practically like a baduk that invites laughter.

The origin of dance Ronggeng Bugis backed tension that occurred between the kingdom of Cirebon with the Islamic Kingdom.

Sunan Gunung Djati as King Cirebon then told a royal relative who came from Bugis to spy or when it was known by the telik code of Kingdom of Pajajaran. 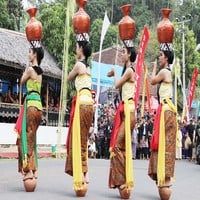 Buyung dancing is a traditional dance of West Java that is usually performed at the peak ceremony at ceremony seren taun conducted by the people of West Java.

This dance is a creation of Emalia Djatikusumah, the wife of Prince Djatikusumah one of the traditional elders.

This dance depicts the village girls who bathe and take water together (Ciereng waterfall) using a jug (where water from metal or clay).

Read more about Is It Safe To Travel Alone in Indonesia? 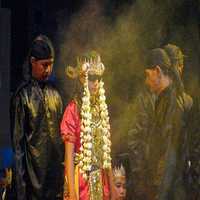 This dance is also called the lais is a form of dance with a mystical or magical scent that comes from Sulasih love story with Sulandono.

Sintren played by a girl who is still holy, assisted by the handler accompanied by gending 6 people. The girl was put in a cage-wrapped cage.

The handler or dalang then walks around the cage’s cage while reciting a spell summoning the spirit of Dewi Lanjar.

If the calling of Goddess Lanjar is successful, then when the cage is opened, the girl is released from the bond and dress up beautifully, dancing to the accompaniment of gending. 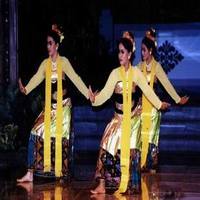 Even on the state holiday as in the celebration of Independence Day Republic of Indonesia.

Some people call it Jentreng Dance because one of his waditra accompanists is Jentreng, which is a stringed instrument with a small size, which is also usually borrowed its name to the name of the dance that is displayed.

Thus some examples of traditional dance in west Java may be a benefit and your knowledge about the type of dance is beautiful and also interesting. See you soon.

Is It Safe To Travel Alone in Indonesia? 15 Correct Answers For You