10 Different Types of Agriculture in Indonesia 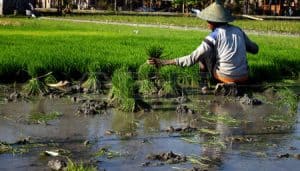 As an agricultural country, Indonesia is blessed with abundant natural wealth plus Indonesia’s position which is considered very strategic. Starting from the geographical side, Indonesia is located in a tropical region that has high rainfall so that many types of plants can live and grow quickly.

Indonesia is also known as an agricultural country because most of the Indonesian population has a livelihood in agriculture or farming. In February 2016, the Central Statistics Agency (BPS) recorded 31.74 percent of the workforce in Indonesia or 38.29 million working in the agricultural sector. Here are some types of agriculture in Indonesia.

Rice fields have lots of water. Wetland farming is often carried out in areas that have plenty of water reserves. In general, wetlands in the country of Indonesia experience various pressures towards destruction. Forest conversion, illegal logging, and forest fires are the main threats to wetland agriculture. Many communities depend on wetland agriculture.

Non-irrigated rice fields are rice fields that obtain irrigation technically. It usually grow with a little of water even no water at all. It can be divided into:

Agriculture with a field system (huma) is agriculture in dry land, as well as moor and gardens (yards). Field (huma) is an agricultural system by opening forests. The way is, the forest is cut down and then burned and cleaned. Only in the rainy season is it planted. After 3-4 times of harvest and reduced fertility, the field is abandoned and usually overgrown with grass and grass.

Farmers are looking for more forest to cut. The field system can cause environmental damage, for example many forests are damaged, water absorption is reduced, soil is deforested, fertility is reduced, eventually causing flooding. Plants planted in fields (huma), namely upland rice, corn, and nuts.

Modern agriculture is a type of farming activity that is currently often applied in various walks of life in Indonesia. In addition to being efficient, this type of activity is also very easy to do compared to other farming activities.

Simply put, gardening can be carried out in the yard of the house. This is done to utilize vacant land and increase income. In the countryside, garden farms are generally quite extensive. Land is planted with commercial crops, both for export commodities and for sale domestically, for example rubber and chocolate.

To enhance the welfare of these commercial crop farmers, the government has carried out various efforts, among others through community nucleus plantations (PIR). PIR is embodied in a program of agricultural land expansion by integrating small-scale agricultural businesses..

Horticulture is part of dryland agriculture. The types of plants that are usually sought include vegetables, fruits, or flowers. Several objectives of activities to increase agricultural yields, reduce the risk of crop failure, maintain soil fertility.

Horticultural plants are much sought after by residents who live in highland areas because the air temperature is relatively cool, which is at an altitude of 500-1,500 meters above sea level. Regional distribution of horticultural agriculture in Indonesia, including Lembang, Pangalengan, Puncak (West Java), Wonosobo, around Dieng (Central Java), Malang (East Java), and Tanah Karo (North Sumatra).

Dry field or usually called Tegalan in Bahasa Indonesia is a continuation of the farming system, this happens if the forest that might be opened for agricultural business is no longer possible. Moor farming land is already settled. Cropping patterns are usually mixed or intercropped between rice fields and pulses (maize, beans, cassava, etc.).

In dry fields, it is usually only cultivated in the rainy season, while in the dry season there is no (left) plant. On tegal land, efforts to preserve productivity already exist by means of fertilization, although it is limited when planted alone, while conservation then goes naturally, or allowed to grow wild plants, which are subsequently cleared when replanted with economic crops. This land productivity is generally low and unstable because the state of the topography is not flat and is not limited by dike or erosion resistant swales.

Shallow marine ecosystems in warm waters with sand bottom and dominated by seagrass plants, a group of plants belonging to Alismatales who adapt to saltwater. Seagrass beds can only form in shallow sea waters (less than three meters) but the bottom is never open from the water (always inundated).

Sometimes, seagrass vegetation is found after mangrove vegetation and its function can act as a filter of mud / soil that is washed away with water to the beach after being able to escape retained by the roots of mangrove vegetation. Seagrass beds can also be seen as ecosystems between mangrove ecosystems and coral reefs. In Komodo National Park, seagrass is the main source of dugan’s feed.

Those are the types of agriculture in Indonesia. In this term, this country plans to make a significant growth in the production of agriculture. It is possible that Indonesia would be the center of economical of the world.

The Best Beaches in Indonesia Near Singapore

10 Modern Jobs You can Do in Indonesia