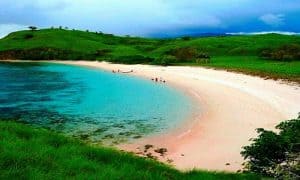 Indonesia is an archipelagic country. The number of islands owned by Indonesia reaches tens of thousands. No wonder Indonesia has the great beach tourism potential. The beach is a geographical form consisting of sand, and is found in the coastal areas of the sea. The coastal area becomes the boundary between land and sea waters.

The length of this coastline is measured around the entire coast which is a territorial region of a country. In addition to tourism potential, beaches in Indonesia are widely used as aquaculture fish fishermen.  If you want to see more about the beaches in Indonesia, here we provide the facts about Indonesian beaches.

Indonesia is the second country that has the longest coastline after Canada. In addition, Indonesia is also the largest archipelagic country in the world. The coastline of the islands of Indonesia is 54.716 km long. The number of islands in Indonesia gives the contribution to the total of the length of the coastline.

The coastline is also possible to increase again if the BIG (Geospatial Information Agency) finish mapping the coastal environment of Indonesia with a larger scale of 1: 25,000 for Java Bali and 1: 50,000 for Sumatra, Kalimantan, Sulawesi and Papua than before with a scale of 1: 250,000. By charting the entire coast using a more detailed scale, the length of our coastline can be longer, up to more than 100,000 kilometers.

Tangsi Beach located in Sekaroh Village, Jerowaru, East Lombok district, Mataram city, Nusa Tenggara Barat, got first place as the most beautiful beach in the world by some world travel website. This is also known as Pink Beach. Besides having reddish color for its sand, this beach also has beautiful bright-crystal colored water. Moreover, the beauty of the underwater nature is charming, as well as the expanse of hills with a vast meadow around the beach.

Indonesia is famous for its marine charm and beaches. Coast in Indonesia has become one of the most potential tourism sector, even some beaches in Indonesia is worldwide. As one of the examples: the island of Bali which the beauty of the beach is well known all over the world. In addition, Indonesia also has another beach that is also suitable for sunbathing, snorkeling, and surfing. Thousands of islands in Indonesia also contribute to these beautiful beaches.

In addition to natural factors, the worsening coastal abrasion in Indonesia is also caused by a lack of attention to the environment. Excessive exploration of natural resources and the construction that is done without regard to environmental sustainability makes coast abrasion worse. For example, coastal abrasion in Bali reaches an average of two meters per year. Looking at the facts, it is necessary the seriousness of the government in handling it, so that the rate of abrasion can be minimized as low as possible.

Panjang Beach has a coastline of 7 km and a distance of about 500 meters tidal line. Panjang Beach in Bengkulu every weekend is always crowded by visitors. Because it has a very long coastline, you will feel satisfied to see this very broad sea. In addition, the wide white sand and sloping, making this a vast area for holidays. Moreover, the waves rolled violently. The quality of the waves may be similar to the beach in Bali, actually very suitable for surfing.

Gili Terawangan is a beach in Indonesia with the most visitors. One of the famous beach tourism in Indonesia is located in Lombok. Its location is close to the island of Bali makes this beach has begun to be visited by many tourists. Usually, there are special packages that offer Bali tours as well as Lombok. Here, you can see the beautiful view of sunset and sunrise. Exotic white sand will complement the atmosphere of sunbathing while enjoying the cold-coconut water.

Kuta beach is often called the beach a million people. The location is located in Kuta precisely south of Denpasar City, Bali, Indonesia. One that makes Kuta Beach famous is the beauty of its sunset. It is even considered the most beautiful sunset in Indonesia. Therefore why Kuta Beach is always crowded visited by the tourists in the afternoon, it’s because they just want to enjoy the sunset at the Kuta Beach. Actually, there are many other places in Indonesia, but the sunset in Kuta is famous in the world.

This is because Indonesia is a strategic place surrounded by two major oceans of the world namely the Indian and Pacific Oceans. With each ocean character, the coast of Indonesia is also affected, such as the big waves and the typical wind, or the color of the beautiful sand. We as Indonesians must be proud of this blessing. Imagine that if we had no beautiful beaches we would possibly have no chance to see the great place.

The damage to the coastline of Indonesia is caused by environmental changes and coastal abrasion. As a result of the destruction of this coastline can have an impact on various sectors such as tourism, marine transportation, the existence of productive land, biodiversity, and shifting borders.

Banyuwangi Beach is named as the cleanest beach in ASEAN. Attractions in Banyuwangi grow rapidly and succeed in sucking tourists. Banyuwangi even won the ASEAN region net champion, beating other Southeast Asia region.

Besides the hygiene factors, community involvement in managing the tourism object of Grand Watu Dodol Beach is also a special assessment. This award assessment is conducted strictly based on 108 criteria. Of the 108 criteria, Banyuwangi got 87.04 percent. The assessment material is not only about cleanliness, but all the processes that support the achievement of a comfortable situation for tourists. ASEAN appreciates the innovation of Banyuwangi tourism program which started from the socio-cultural approach, so that effectively mobilize the community.

Those are the facts about the beach in Indonesia. Some of them might be such a bad news. However, it should be the great effort for us to preserve Indonesian beach.