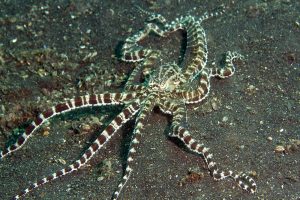 The Mimic octopus is one of Indonesia’s endemic animal species which was first discovered in Sulawesi in 1998. Like octopus in general, this octopus camouflage can camouflage by changing the body color to be equal to the surrounding environment. The uniqueness of the mimic octopus that distinguishes it from other octopus species lies in its ability to mimic the shape and behavior of inanimate objects, such as coral reefs and rocks, as well as other marine animal species.

The form of animal behavior in mimicking the behavior or likeness of other animals is called mimicry and from there the scientific name of the disguised octopus originated. If you want to see more about the facts of Indonesian mimic Octopus, you can read the following paragraphs.

Undercover octopus can grow up to 60 centimeters long with a white or white-spotted brown body pattern. This relatively small coat has eight arms with a length of each arm about 25 centimeters and a thickness equivalent to a pencil. Each arm has 2 suction lines that act as the sense of touch and the sense of taste. Like octopus species in general, mimic octopuses have body sheaths or mantles that protect three hearts, siphon tubes, gills, and other internal organs. There is also chromatephores in the octopus camouflage layer, the pockets containing dyes that will work when the camouflage occurs.

Their pupils are horizontal slits, unlike human eyes (round ones) or cats (having vertical slits). The strange thing is that the octopus eyes remain horizontally oriented, regardless of body position. This means they see things remain the same whether they are upside down or tilted.

Mimic octopus is a type of solitary creature and also does not have a shell, which makes octopus susceptible to other predators. But their predators must first see them. They usually colonize with their same species in a certain place of the sa for hunting some foods.

Mimic octopus is a carnivore, meaning they eat meat. Food can include shellfish, shrimp, lobster, fish, sharks and even birds. Octopuses usually drop down on their prey, enveloping with their arms and pulling animals into their mouths. Octopus has a short life span. Some species live only about six months. Other species, such as the North Pacific giant octopus, can live for five years. Usually, larger octopuses, live longer, according to the World Animal Foundation.

Octopus has three hearts. Someone pumps blood through his organs. The other two pump blood through their gills, according to the World Animal Foundation. Blood octopus is blue because it contains a copper-based protein called hemocyanin. When the octopus is swimming, the organ that sends blood to the organ stops ticking. This depletes the octopus, which is probably the reason they chose to crawl rather than swim, according to the Smithsonian article.

The octopus has a very good sense of touch. Their suckers have receptors that allow the octopus to feel what is touched. Most of the octopuses do not have an internal frame or protective shell. Their bodies are soft, allowing them to squeeze cracks and small cracks. Even an octopus at New Zealand National Aquarium squeezes out of his tank and performs eight demonstrations for a sewer which fortunately for him leads directly to the sea.

Once a mimic octopus camouflages, the muscles around the chromatophores contract. The dye will fill the gaps of the body so that the body color of the undercover octopus is changed. The resulting color can be yellow, orange, red, blue, black or a combination of these colors. The colors follow the place or object that is found around the octopus. Along with the process of color change, the mimic octopus will change the shape of his body to be like objects that exist around him or be another animal.

In general, octopus arm can perform various types of complex reflex movements, because the arm has 3 different stages of the nervous system. In order for the disguise to be more perfect, the undercover octopus will replace the texture of the mantle, so it looks pointy like seaweed or bumps like the texture of a rock. The coat is the envelope of the body of the octopus made of muscle and looks like a pouch.

Octopus impersonators do mimicry to disguise. Incognito is done to trick prey then ambushed, such as crabs and small fish. In addition, it camouflages itself to avoid predators. The predators of octopus undercover include moray sea eel and shark. It is not known how many types of disguises this octopus can do. Mimic octopus can imitate other animals such as stingrays, lionfish, sea snakes, crabs, jellyfish, starfish, sea shells and lepu fish.

The mimic octopus is capable to camouflage or do mimicry by changing the shape or color of its body. It can be mimicry like coral reefs, algae, and other marine animals. Indeed many living things that can mimicry resemble other living things. But nothing can rival the number of undercover octopus mimicry. This octopus even can be mimicry into 15 other sea creatures are different. This is so amazing, right?

The mimic octopuses live in shallow waters, usually with a depth of no more than 15 meters, like a river mouth. Disguised octopus habitats have sandy or muddy foundations and can be said to have no diverse marine biota population in them.  Due to such aquatic conditions, the undercover octopus does not have many places to evade its predators during the day and relies heavily on its ability to imitate survival. This octopus can only be found at some point of Indonesian waters, precisely in Sulawesi and Bali waters.

Foods from undercover octopuses are shellfish and small fish found mostly in their habitats. Disguised octopus searches for food in underwater holes where undercover octopus uses its arms to sense the presence of its prey, then sucks it using a suction device on the arm and inserts it into in the mouth.

Those are some facts about mimic octopus. Although it is not a kind of endangered animal, this endemic creature should be well preserved. It must be protected from the cruel human who wants to exploit or catch this animal.

25 Importance of Bali Indonesia and Its People