Indonesia, a country with a hundreds cultures, races, and also languages. However, beside all of that, Indonesia also rich with histories. The history is important thing in human life, even though we can’t see it again, but we can feel the momentum when visiting the historic places. read all over Indonesia. From the east, to the west, you can them all. So before further do, lets jump to know more about historical place in Indonesia. 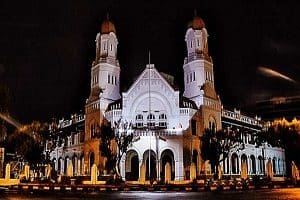 Lawang Sewu is a historic building in Indonesia located in Semarang City, Central Java. This building was formerly the office of Nederlands-Indische Spoorweg Maatschappij or NIS. It was built in 1904 and completed in 1907. It is located at the Tugu Muda area.

However, Lawang Sewu was built on 27 February 1904 under the name Het hoofdkantor van de Nederlands-Indische Spoorweg Maatschappij (used for NIS Headquarters). Initially the office administration activities were conducted at Semarang Gudang Station (Samarang NIS), but with the rapid development of the railway network, resulted in the increasing need for large technical and administrative personnel. 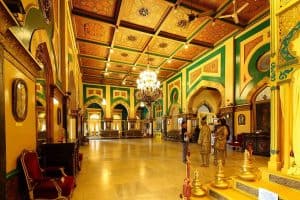 For you who want to see the buildings that have elements of Malay, Spanish, Indian and Italian, then the Maimun Palace in Medan is a must for you to visit. However, this historical building has a uniqueness in terms of building design.

Built in 1888 by a European architect, this palace is dominated by yellow, which is the color of the greatness of the Malay people. Speaking of a royal palace, this building appears to have adapted the Mughal style, an Islamic model of Persian architecture which was popularized by the Mughal Empire in India, through a large, dome-like arch facade. 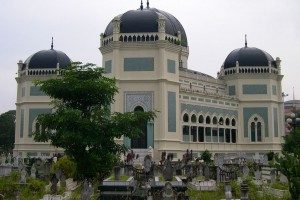 History of the Great Mosque Palembang starts during the war between the people of Palembang with the Dutch in 1659 AD, at that time this mosque burned. The mosque is a mosque built by the Sultan of Palembang at that time, Ki Gede Ing Suro, which is located in Kuto Gawang Palace. A few years later, precisely in 1738 AD, Sultan Mahmud Badaruddin Jayo Wikramo rebuild the mosque right at the location of the burning mosque.

However, the construction of the new mosque took a long time, until on May 26, 1748 or on 28 Jumadil Awal 1151 year hijriah, the mosque was just inaugurated standing. At the beginning of construction, the Great Mosque of Palembang called by the people of Palembang with the name of Sulton Mosque. The name refers to the construction of a mosque that is chaired and managed directly by Sultan Mahmud Badaruddin Jaya Wikramo. 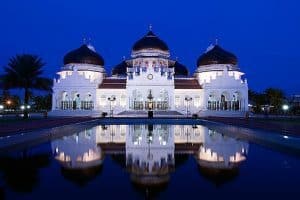 Next historical place in Indonesia is Baiturrahman Great Mosque is a mosque of Sultanate of Aceh built by Sultan Iskandar Muda Mahkota Alam in 1022 H / 1612. During the Sultanate of Aceh Darussalam, In addition to the Holy Mosque in Makkah holy city, Baiturrahman Great Mosque is also one of the Islamic learning center visited by people who want to learn about Islam from all over the world.

For your information, when the Kingdom of the Netherlands attacked the Sultanate of Aceh on the second Dutch aggression on the Shafar Month 1290 Hijriah or 10 April 1873 AD, Masjid Raya Baiturrahman burnt. Then, in 1877 the Dutch rebuilt the Baiturrahman Great Mosque to attract the attention and reduce the anger of the Acehnese. 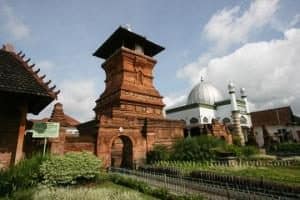 The Kudus Tower Mosque is also called Al Manar Mosque (“Tower Mosque”) is the ancient mosque built by Sunan Kudus since 1549 AD (956 Hijri). The current location is in Kauman Village, Kudus District, Central Java. There is uniqueness of this mosque because it has a similar tower temple building and architectural patterns that combine the concept of Islamic culture with Hindu-Buddhist culture that shows the process of acculturation in Islamic jurisprudence.

The mosque was founded in 956 AH or 1549 AD. It is based on Arabic inscription written on stone tablet that has  30 cm wide and 46 cm long located in mosque’s mihrab. Also the first stone to build this mosque is using stone from Baitul Maqdis in Palestine, therefore the mosque is then called Al Aqsa Mosque. 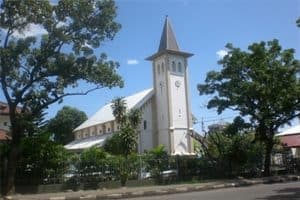 However, It was then that the missionary and Catholic church began to spread in the archipelago, including in Jakarta. 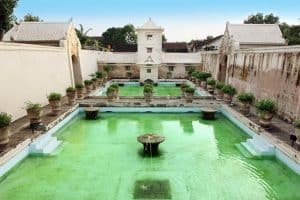 Taman Sari is a former garden site or palace gardens of Ngayogyakarta Hadiningrat palace, Taman sari was built at the time of Sultan Hamengku Buwono I in 1758-1765. Initially, the park which received the title “The Fragrant Garden” has an area of ​​more than 10 hectares with about 57 buildings either in the form of bathing pools, buildings, suspension bridges, artificial lakes, artificial islands, water canals and underwater tunnels. 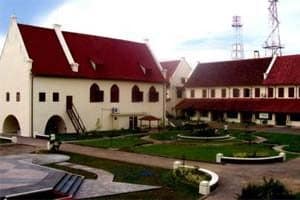 Next historical place in Indonesia is Rotterdam / Ujung Pandang fort (Jum Pandang) or Fort Rotterdam is a fortress of the Gowa-Tallo Kingdom. The location of this fortress is located on the west coast of Makassar, South Sulawesi, this fort was built in 1545 by the 9th King Gowa named I manrigau Daeng Bonto Karaeng Lakiung Tumapa’risi ‘kallonna.

At first this fort was made from clay, but during the reign of King Gowa 14 Sultan Alauddin fortress construction was changed to a rock that is sourced from Karst Mountains in the Maros region. Ujung Pandang fortress is shaped like a turtle who want to crawl down into the ocean. 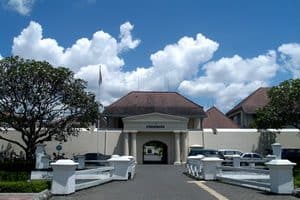 Yogyakarta Vredeburg Fort stands closely related with the birth of Yogyakarta Sultanate. Agreement of Giyanti in February 13, 1755 which held to settle the feud between Prince Mangkubumi (Sultan Hamengkubuwono I later) and Susuhunan Pakubuwono III is a result of Dutch politics who always wanted to interfere in the internal affairs of the kings of Java at that time.

The location of the castle is facing the main road to the palace becomes an indication that the function of the fort can be utilized as a bulwark of strategy, assault, intimidation and blockade against the palace. 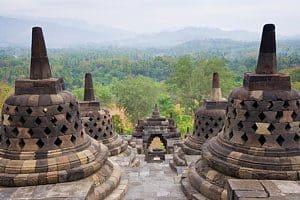 Borobudur is a Buddhist temple located in Magelang, Central Java. The location of the temple is approximately 86 km west of Surakarta, 100 km southwest of Semarang and 40 km northwest of Yogyakarta. This stupa-shaped temple was founded by Mahayana Buddhists around the year 800 AD during the reign of Shyilendra. Borobudur is also the largest Buddhist temple and Buddhist monument in the world.

The unique thing of Borobudur temple is the stone used as the main building construction material made of volcanic ash of Mount Merapi which is also frozen. These blocks are then arranged to form more than 500 stupas without the use of cement at all. 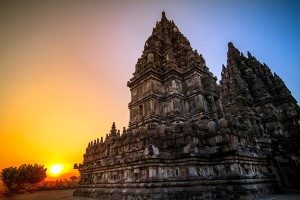 Loro Jonggrang Temple or Prambanan Temple is the largest Hindu temple complex in Indonesia built in the 9th century AD. This temple is dedicated to Trimurti, the three main Hindu gods namely Vishnu, Shiva and Brahma. According to the inscription of Siwagrha the original name of the temple complex is Siwagrha (Sanskrit meaning “Shiva house”), and indeed in the garbagriha (main room) this temple resides in the statue of the three-meter-long Shiva Mahadewa which shows that in this temple Shiva god takes precedence.

Also, Prambanan is the largest and most magnificent Hindu temple ever built in ancient Java, the construction of the Hindu temple of the kingdom was preceded by Rakai Pikatan as a rival of Buddhist temple Borobudur and also Sewu temple located not far from Prambanan. 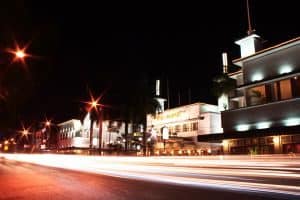 Majapahit Hotel Surabaya is a four star hotel rich in history of Indonesian struggle against invaders in 1945. At that time, there was a ripping tragedy of the Dutch flag at the top of the hotel. For photography, Majapahit Hotel offers a variety of interesting corners that you can capture.

From the outside, you can capture bulbs or with glowing lights techniques with the hotel’s background. Go inside, you can see the garden located in the middle of the hotel. After that, try stopping by the hotel restaurant, where you can find the element of “old school” typical of the old era. 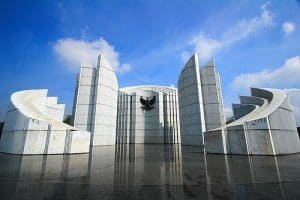 Next, is going to Flower City, Bandung. One of the historic places here that is photogenic for your Instagram page is the People’s Struggle Monument of West Java or also known as Monju (Monument Perjuangan). Located right on the north side of Gedung Sate Bandung, this monument has a magnificent and modern architecture.

During the day, the dominance of white color in harmony with the blue of the sky makes your photos so beautiful. While at night, the light-colored firing lights highlight this monument to make your photos look more alive and different. 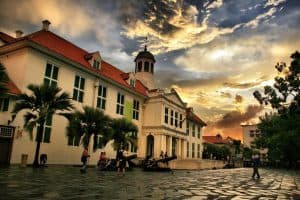 Holiday to Jakarta, it’s incomplete if you have not set foot to the Old Town area located in West and North Jakarta. The reason, this classic area store many stories of the past in every corner.

For you lovers of mobile photography, here you will find various interesting spots to be tested. Starting from the classic Dutch heritage buildings, historic collections, to portraits of diversity of Indonesian who walking in this area.

15. The House of Sampoerna – Surabaya 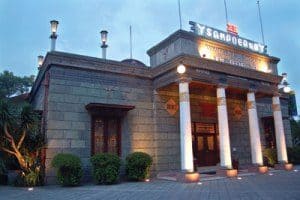 last historical place in Indonesia which informed here is House of Sampoerna was formerly an orphanage built by the Dutch in 1862 in Surabaya. Then in 1932, a Chinese businessman named Liem Seeng Tee bought it and made this building as the first cigarette factory. Currently, this building turned into a tourist spot for the public. Inside, you can visit museums, art galleries and coffee shops.

Also, this museum contains all information about the history and development of Sampoerna cigarette business. While in the art gallery, you can see artwork from the best artists in Indonesia.

Finally, that’s it, all you need to know about 15 Indonesian Historic Places, especially its history. Well those are must visit places in Indonesia, don’t forget to come there. You must feel the greatness of them, yourself. Okay, enjoy it and have a great day !

Top 23 List of Famous Indonesian Food (#5 is Most Delicious)