Home » Disaster » 10 Reasons Why Earthquakes are Common in Indonesia 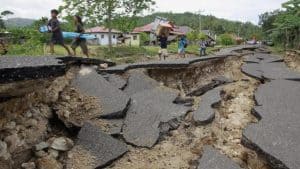 Furthermore, it enters the north of Indonesia until it enters the Philippine cluster. Every year there might be more than 10 cases of earthquake occurred in Indonesia? How could be like this? Here we are going to explain why earthquakes are common in Indonesia.

The volcanoes located in Indonesia are influenced by four tectonic plates that collide with each other. They are such as Eurasian plate, the Indo-Australian plate and the Pacific plate. The collisions of the three plates eventually form a series of volcanoes. This is caused by the hot liquid rock (magma) that exits through the slit of the plate and then hardened on the surface to form cones that cause the emergence of volcanoes in the plates. That factor causes Indonesia prone to earthquake. Indonesia is a meeting of the world’s tectonic plates, to the South of the Indo-Australian Plate, to the East of the Pacific Plate, and to the Eurasian Plate.

An earthquake caused by volcanic activity is called a volcanic earthquake. Volcanism is the event of the exit of magma to the surface of the earth through magma hole in the body of a volcano. The existence of inner energy causes the impulse to fluid magma and rocks to exit to the surface of the earth. At the time of magma and rocks out there is a friction between the magma with the volcano wall so that the vibrations arise which then spread to all directions through the earth plate and comes what we feel is called an earthquake.

The tropical climate also causes a lot of unstable soils. Much of the land is damaged. Tropical climate with high rainfall makes it easier to become soil erosion. Natural disasters such as landslides, for example, are because the rainfall here is quite high. Then the landslides can form an earthquake. It’s from the natural side. This country is densely populated, especially in Java and Sumatra. However, the infrastructure is not designed according to the conditions of nature.

Nature is moving just like a cycle. For hundreds of years and even millions of years ago, the cycle is rotating again and again. It only moved 5 cm per year. Next, it will be crashed. There are three cycles; pressed, collected, removed. It has always been from a long time ago. Well, coincidentally in this decade of our generation, chap in the phase of release so many earthquakes. Later, after the magma was loose, yes safe again. Then enter the process of emphasis again, and gathering and so on.

Geographically Indonesia is an archipelago country that located at a meeting of four tectonic plates of the Asian Continent, the Australian Continent, the Indian Ocean plate, and the Pacific Ocean. In the southern and eastern parts of Indonesia there is a volcanic arc stretching from the islands of Sumatra, Java, Nusa Tenggara, and Sulawesi, whose sides are both old and low volcanic mountains, partly dominated by swamps.

The condition is very potential as well as prone to disasters such as volcanic eruptions, earthquakes, tsunamis, floods and landslides. Data show that Indonesia is one of the world’s highest seismic states, more than 10 times the level of seismicity in the United States. Earthquakes caused by plate tectonic interactions can cause tidal waves if they occur in the oceans.

Inside the earth there are several plates of the world that continue to move mutually balancing each other. In this balancing process causes friction resulting in tectonic earthquakes. Steps due to this tectonic activity will be able to trigger active volcanoes to react to balance also that will cause volcanic earthquakes. Volcanic earthquakes may not cause major effects, but lava vomit and hot clouds when volcanoes erupt have an enormous impact on the damage.

This earthquake occurs only in lime digging areas, underground mining areas and the like. This earthquake is less common and if it occurs only locally. Falling ruins will cause a less-than-large earth tremor, the greatest vibration being only up to 3 on the Richter Scale. This also happens occasionally in Indonesia. Such as land sloping and unstable, the buildings on it are likely to collapse and cause local livelihoods.

Subduction which is a meeting of two plates is found along the west coast of Sumatra, the southern coast of the archipelago, and northern Sulawesi. Practically, the regions along Sumatra, Java, Bali, Nusa Tenggara, and Sulawesi face the threat of earthquakes due to the subduction of active plates. The devastating earthquake caused by activity in the subduction zone is an earthquake of Aceh magnitude of 9.1 in 2004. The quake resulted in a tsunami that killed 230,000 people from 14 countries.

Those are some reasons why earthquakes are common in Indonesia. It almost like Japan as archipelago country. And hopefully, the system to minimize the victim of the death and the damage of building will be same like Japan.

12 Reasons Why Indonesia is Over Populated