The History of Batik Indonesia 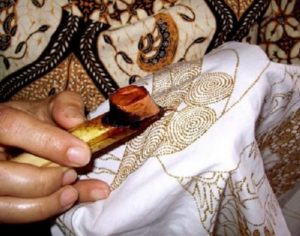 Batik Indonesia has been widely known throughout the overseas community. This ancestral heritage of Javanese society even has been titled by UNESCO as one of the Masterpiece of Oral and Intangible Heritage of Humanity since 2 October 2009 (now it is known as National Batik Day).

Batik was firstly introduced to the world by President Soeharto, who at the time was wearing batik at the UN Conference. Since then, the world has noticed this beautiful fashion item from Indonesia. Batik is a craft that has high artistic value and has been a part of Indonesian culture (especially Java) since a long time.

Javanese women in the past made their skills in batik as a livelihood, so in the past batik work was the exclusive work of women until the discovery of “Batik Cap” which enabled men to enter into this field

Etymologically the word batik comes from the Javanese language, which is “amba” that means “to write” and “tik” that means “dot”. These words later developed into the term “batik”). This term has a sense associated with making a dot or wax drip on the fabric cloth. Based on the etymology batik is also associated with a technique or process from the start of the motive drawing to color immersion. One of the characteristic of batik is the way of drawing motif on the fabric which is using specific tools called canting and cap.

Judging from the development, batik has been known since the time of Majapahit and the spreading of Islam. Batik at first only made in limited amount by the palace. Batik was worn by the king and his family and their people. By his people then batik brought out the palace and growing in the community to this day. Based on its history, the period of batik development can be grouped as follows:

History of Batik Indonesia began at ancient era. Art barrier technique of coloring cloth staining using wax is one of the ancient art form. The discovery in Egypt shows that this technique has been known since the 4th century BC, with the discovery of cloth wrapping mummies which were also coated by wax to form a pattern. In Asia , a similar technique of batik is also applied in China during the Tang Dynasty (618-907) as well as in India and Japan during the Nara period (645-794). In Africa , this technique was also known by the tribe Yoruba in Nigeria , as well as the Tribe Soninke and Wolof in Senegal .

See also: What to Wear in Indonesia – History of Jakarta

Based on the history of its development, batik has been developed since the time of Majapahit. Mojokerto is the center of Majapahit kingdom where batik was known at the time. Tulung Agung is a city in East Java which is also recorded in the history of batik. At that time, Tulung Agung was still a swamp known as Bonorowo, dominated by Duke Kalang who did not want to submit to the Majapahit Kingdom until there was a polical action launched by Majapahit. Duke Kalang was killed in battle around the villages of Kalangbret and Tulung Agung successfully mastered by Majapahit.

After that, many soldiers who live in the region Bonorowo (Tulung Agung) bring the culture of batik from Majapahit. They are the ones who developed batik. In its development, batik of Mojokerto and Tulung Agung are much influenced by batik of Yogyakarta. This happened because during the clash of the Dutch colonial army with the troops of Prince Diponegoro, some of Kyai Mojo’s troops resigned eastward in the Majan area. Therefore, the characteristic of Kalangbret batik from Mojokerto is almost the same as Yogyakarta batik, which is basically white and its color is light brown and dark blue.

Batoro Katong Raden a descendant of Majapahit kingdom brought the teachings of Islam to Ponorogo, East Java. In the development of Islam in Ponorogo there is a boarding school located in the area Tegalsari which were led by Kyai Hasan Basri. Kyai Hasan Basri is the son-in-law of the king of Kraton Solo. Batik that was then still limited in the palace environment finally was brought out of the palace and developed in Ponorogo. The old batik areas that can be seen now are the Kauman area of Kepatihan Wetan extends to the villages of Ronowijoyo, Mangunsuman, Kertosari, Setono, Cokromenggalan, Kadipaten, Nologaten, Bangunsari, Bekasi, Banyudono and Ngunut.

Last History of Batik Indonesia. In European literature, batik technique was first described in the book History of Java (London, 1817) writings of Sir Thomas Stamford Raffles . He has been a governor of the British in Java during Napoleon occupied Holland. In 1873 a Dutch merchant Van Rijekevorsel gave a piece of batik gained during a visit to Indonesia to Ethnic Museum in Rotterdam and at the beginning of the 19th century that batik began to reach its golden period.

When exhibited at the Exposition Universelle in Paris in 1900, Indonesian batik amazed the public and artists.
Since industrialization and globalization, which introduced the technique of automation, new types of batik emerged, known as batik cap and batik print, while traditional batik produced by handwriting techniques using canting and wax is called batik. At the same time immigrants from Indonesia to Wilayah Persekutuan Malaysia also brought Batik with them. 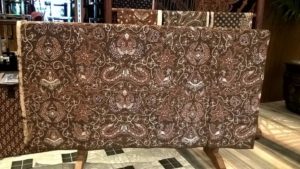 Batik in the area of Yogyakarta was known since the time of the Mataram first Kingdom during the rule of King Panembahan Senopati. Plered is the first batik village. The process of making batik at that time was still limited in the royal family environment and done by the women who accompanied the queen.

At the official royal ceremony, the royal family wears a combination of batik and lurik clothes. Seeing the clothes worn by the royal family, the people were interested and imitate so that finally the batik were out of the palace wall and spreaded among ordinary people. During the Dutch colonial period, battles were often occurred. That causes the royal families fled and settled in other areas such as Banyumas, Pekalongan, and to the east of Ponorogo, Tulung Agung and so then make batik more widely known.

Batik in Other Areas

The development of batik in Banyumas is centered in Sokaraja area. In 1830 after the Diponegoro war, batik was taken by the followers of Prince Diponegoro who mostly settled in the area of Banyumas. Batik Banyumas is known for their special motifs and colors and known as Banyumas batik. In addition to Banyumas, followers of Prince Diponegoro were also settled in Pekalongan and develop batik in the area of Buawaran, Pekajangan and Wonopringgo.
In addition to the area of Central Java, batik is also growing in West Java. This happens because people from Central Java wander to cities like Ciamis and Tasikmalaya. Batik areas in Tasikmalaya are Wurug, Sukapura, Mangunraja and Manonjaya. In that area, Batik Cirebon began to develop from the palace and has its own characteristics.

The process of making batik is started with giving decoration on the cloth by covering certain parts by using the barrier. The tool that is used in this process is canting with the commonly used barrier which is candles or wax. Cloth that has been drawn with the wax then will be colored with immersion technique. After that, the wax is removed by boiling the cloth. At the end, we will see a cloth with beautiful motif and color called batik.

Batik tradition was originally a hereditary tradition, so that sometimes a motif can be identified as coming from a particular batik community. Some batik may indicate the status of a person. Even today, some traditional batik motif is only used by the royal family of Yogyakarta and Surakarta and still exists until now due to the globalization.

Those are complete explanation about history of batik Indonesia.

See also: festivals in indonesia – History of Chinese in Indonesia