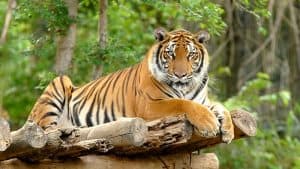 Javan tiger species was declared to be extinct in around 1970s. There is no activity of this animal that is caught. However, recently, the world of animal conservation was startled by the appearance of a large cat with stripes that resembled the Java Tiger.

In fact, some residents and fishermen claimed to often see the tiger around the conservation area Ujungkulon, Pandeglang, Banten. The extinction status of animals with the Latin name Panthera Tigris Sondaicus is still a polemic among several parties. Some surprising findings about these animals continue to thrive in society. The facts and issues about Javan tiger are continuously spreading in the world. Here are the interesting facts of Javan Tigers you need to see.

Javan tiger is a large carnivorous species that can only be found in Java (endemic). The tiger is one of the tiger subspecies (Panthera tigris) naturally spread in Asia, from the Caspian sea lakes, Siberia of India, China, the continent of Southeast Asia to the Archipelago Archipelago. Although in general, the Javanese Tiger’s life habit is similar to other tigers. But on the basis of its physicality, the figure of Java Tiger shows a distant characteristic of ‘different’.

Together with lions, leopards and jaguars, Java Tigers belong to a large cat family (Felidae) who occupy the top position in the food chain. To ensure the survival of prey animals, the tiger has its own territory. Males generally have a territorial area measuring 10 x 10 km. Meanwhile for females have the smaller range of roaming.

The average size of the Java tiger is larger than the Sumatran tiger and the Balinese tiger, even slightly larger than the Malayan tiger with an average length of 200-245 cm. Male weight ranges from 100-140 kg and females ranges from 75-115 kg. Compared to other subspecies, Javanese tiger forms are among the most unique and “sexy”.

In addition from the info agreed by experts in a forum of wildlife discussion recognized Javan tiger also has the largest palm than the size of his body. Even the size of the Java tiger palm can be the size of a Bengal tiger even though the body is not too big tigers or as big as the tiger bengal (second largest tiger).

Unlike the lions that live in groups, tigers tend to live solitary and prefer to hunt at night (nocturnal). The male tiger is also very intolerant towards other males entering his domain. Therefore, as a warning, the tiger will mark the boundaries of its territory with urine and the scratching of scratches on a particular tree trunk. Each individual tiger has a distinctive urine odor.

From the traces and dirt left behind, it is known that the Java Tiger is an opportunist predator. Java tigers will prey on whatever animals can be found during the jungle exploration. Deer (Muntiacus muntjak) and wild boar (Sus scrofa) are her favorite foods. Other animals such as Bull (Bos javanicus), long-tailed macaques (Macaca fascicularis), pangolins (Manis javanica), snakes, forest chickens, even rhinoceros beetles are also included in the menu list.

Java tigers have the most Robust skeleton in the world of this data compared to the rest of the ancient hunting bones with tigers around the world. Java tiger (Panthera tigris sondaica) has a robustness of 14.8% more robust framework of the tiger bengal (Panthera tigris tigris) as the lowest benchmark among all the tigers.

The head of the Java tiger looks small for its rather large, long and slender body size. Head shape is also more flattened with a narrow and long nose. The color of the yellow head is dark red with a bit of mane / beard growing on the chin / neck. Cheeks in white domination with 2 thick colored striped stripes. Java tiger neck looks more level. Legs rather long with the size of the foot is very large.

Javanese tiger pattern is also very unique. Compared to other subspecies, Java tiger has the largest number of stripes (can reach a total of more than 100 stripes per tail). Shape is also very thin and long with a tight distance, especially in the thighs and surrounding areas. Surprisingly again, the Java tiger stripe is only concentrated in the back of the body. Upon reaching the abdomen, the stripes seem to disappear unexpectedly. Half the abdomen to the front looks so plain with a minimal number of stripes.

In the early 1990s, WWF Indonesia took the initiative to install a camera trap to ensure that individual Javanese tigers remained. Camera Trap was in pairs in 19 dots that allegedly became the Java tiger crossing area. The results of the year-long monitoring are really sad. None of the photographs and traces of the Javanese tiger were found. In fact, based on the results of the survey, IUCN (1996) officially declared that the Java Tiger is extinct from the face of the earth forever.

Although the IUCN has established the extinction status of Java tigers, some people report still seeing the presence of the big cats in the Meru Betiri forest area. It is also supported by students and nature lovers who find traces and excrement of Javanese tigers during their explorations in the area.

A Javan Tiger researcher based in Cirebon tried to gather evidence that the Java Tiger is still there. Samples of faeces and trace photos and scratch marks on the trunk of trees are evidence that the Javanese tiger is still there. His research over the years combined with information from his fellow lovers shows that Java tigers still exist. The population of Javan tigers generally spread in remote forest areas or large mountain areas on the island of Java.

Those are the facts of Javan tigers. Though already declared extinct, some people still hope that this species still exists. The findings and evidence of the existence of these animals bring fresh air to animal conservation researchers. There is a kind of hope that the Javanese tiger can reappear to dispel the extinct assumption of decades ago.

17 Best Mountain Views in Indonesia You Must See