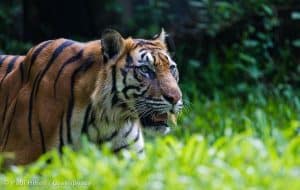 In fables in Asia, tigers are often described as the king of the forest. Valor and status as animals that topped the food pyramid are the reasons. Besides that, a tiger is one of the strongest carnivores in the forest and is the biggest predator.

In this case, the tiger does have many advantages so it is so admired and most feared in the jungle. There are some unique and interesting facts about tigers, tigers that currently still exist in Indonesia, the Sumatran tiger, while the Javan tiger is very rare. Here is an example of the facts about Indonesia tiger that needs to be known:

A. Sharp and Amazing Tiger Vision

Tiger pupils are round, unlike cat pupils which are like straight lines during the day. That is, tigers are actually not nocturnal animals or hunters at night. They are used to hunting in morning and evening. Their eyes are very alert and also sharp to see prey.

Although night vision is not as good as a cat, it is about 6 times better than human vision. Therefore the tiger is very agile when eyeing prey until the prey position is right to be pounced. When the prey is in front of the eye, the tiger does not immediately pounce on it through its eyes watching the prey in weak conditions, alone and away from the herd. That’s one of the facts about Indonesia tiger.

In some cases, due to their habitat threatened, tigers often enter villages and attack humans. Usually, they do not attack blindly, but hide outside the village and look for people who are alone. This is done at dusk or late at night when human vision is not alert. Therefore it is necessary to be vigilant when there are tigers entering the village because how to win tigers is not as easy as catching pets.

The other fact about Indonesia tiger is that most tiger eyes are yellow. An exception to white tigers has blue eyes, this is related to the eye gene adjusting the genes in white feathers. This is one of the uniqueness of a tiger that is not owned by other animals in the forest. His eyes were interesting and also very sharp for his prey.

5. Tigers See a Variety of Colors

Tiger babies are blind in the first week after birth. So that baby tigers are vulnerable to being far from the mother, in the jungle the tiger baby forest is generally directly cared for by the mother. Tiger vision like humans, which has the same color vision. That is, tigers are not color blind. So it is very clear in seeing the variety of colors and also able to smell very sharp.

6. Tiger is Good at Swimming

Tigers are great swimmers. They like to play water when they are young. Not surprisingly, tigers are also adept at swimming as far as tens of kilometers to find game animals. The facts about another Indonesian tiger beside being able to swim, the tiger is very good at soaking its body lingering in the water. Even in the cold air even though tigers like to play water. The tiger has antiseptic saliva. When it’s wounded, a tiger needs only to lick wounds as the saliva acts as a disinfectant. Tiger tongue has fleshy feathers, so when bathing and licking the body, it indirectly combs their hair.

7. Tigers are Smart Running and Jumping

Tigers can run at speeds of 60 km / h for short distances. Tigers can jump as far as 6 meters and up to a height of about 5 meters. According to Animal Planet, tigers can mimic the sounds of other animal calls to attract prey. So that prey can easily be ambushed and preyed on. The ability of this tiger is training hunt instincts that are very reliable and also strong because he was nicknamed as jungle king or forest.

The facts about Indonesia’s next tiger, like other predators, tigers kill their prey by strangling their necks to lose blood. If the prey artery is broken, it will immediately die in seconds. If not, the tiger will bite and bring it to death. Besides the hind legs, tiger claws are also very strong. One swipe can destroy a bear’s skull. Tigers are intelligent animals that adapt when hunting. Usually, they bite the neck so that the prey die quickly. However, if you are swimming in the river and meeting crocodiles, then the tiger can match the eyes of the reptile to the blind and turn its body so that it can remove the stomach contents of the crocodile.

9. The Power of Tiger Territory

Tigers rarely roar. They just roar to communicate with other tigers. Territory boundaries are done by scraping trees and tying them. From the smell of urine, a tiger can know the age, sex, and reproductive conditions of other tigers. Male tigers have a wider area than females. However, fellow tigers never control overlapping areas.

Male tigers are family protectors. They are always waiting for females and their children to eat prey. Female tigers only have a fertile period of 4-5 days throughout the year. That’s when they start a mating season. Then it contains for 3 months and gives birth to 2 to 3 cubs.

10. How to Tiger is Hunting

Maybe only one of ten successful hunts for a tiger. So that tigers usually go a few days without eating before they finally find their prey. In fact, tigers are animals that are not strong enough to withstand hunger (perhaps because of the size of their bodies).

Tigers will starve to death in just 2-3 weeks. Tigers often hunt alone, except to catch large animals and then ambush with their herds. Tigers are also an animal that likes to ambush, so if suddenly crossing with tigers in the forest rarely humans are attacked unless they feel threatened. That is the facts about Indonesia tiger in the forest and nature.

Apart from the explanation above, there are some other facts about Indonesia tiger that you need to know, including:

Hopefully, we can maintain the sustainability and habitat of tigers that are now almost extinct. Take care of Indonesia’s forests and

s, hopefully, this article is useful. There are so many explanations about the facts about Indonesia tiger, see you again.