Home » Fauna » 15 Types of Monkeys Are in Indonesia

15 Types of Monkeys Are in Indonesia

As you know from some of our lists about animals, you already learnt that in Indonesia, you can find so many kinds of animal. Even you can find much varieties of a species than in other surrounding countries. 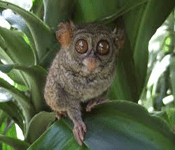 So what’t a Tarsius? If you ever seen a movie called Madagascar, there’s one animal there that is so small, but having big round eyes. And that’s Tarsius. It’s actually the smallest primate on the planet, even though it’s not monkeys.

You can this animal in some countries around South East Asia like Philipine and also Indonesia, even though it’s pretty rare in here. 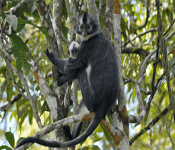 If you look at this animal, you of course will know that this Kedih is considered as a monkey. The name of Kedih is not so popular, but it’s actually one of teh beautiful monkeys in this world that also can be found near us.

Maybe the people already familiar with it, but with the other names like North Sumatran Leaf Monkey, and also Sumatran Grizzled Langur. This monkey is known for having that kind of funky hair, while having black and white fur. 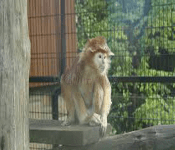 The next type of monkey in Indonesia is teh Javanese Lutung. As you know, this monkey is an inhabitant of the forests in Java island. It has for about 55 cm in size, and a tail with 80 cm, just like the other lutung species.

For the male, you can spot it right on by looking at the black hair it has. And the famale has the silver colour on its genital area. The colour is changing of course. At a young age, the Javanese lutung wil have more brownish colour, then it’s star getting darker from time to time. 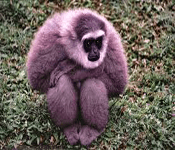 What a cute monkey this is. This Owa monkeys don’t have tail like the usual monkey we’ve known. It actually has slimmer body than the other monkeys. Sometimes, the Javanese Owa can act something funny that always can make people smile.

The Owa can be titled as a Kings of Trees, because in their life time, they would never leave their trees, except on several occasions. But, even though they nearly never come down, the Javanese Owa can walk with only two legs of them, just like humans. 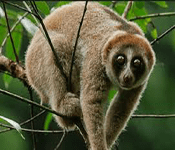 In Indonesia, there are also some kinds of Sloth that can still be seen on the tropical forest of Borneo, Java or Sumatra. They are Javanese Kukang, Sumatran Kukang, and also of course the Bornean Kukang. Each of them has its own specifications.

Three of them also having different weights. Starting from 900 grams of Javanese Kukang, to the Bornean Kukang on 600 grams. Also, the Javanese has more beautiful colour than the other two. And from all three of them, the Javanese is the rare one. 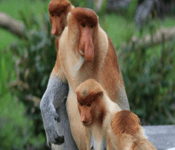 If you have been to one attraction in Jakarta called Ancol, maybe the face of this creature would be so familiar. Yep, this is the icon of that place, one animal called Proboscis. In Indonesia, it has another name, the very famous one, Bekantan.

Proboscus is of course famous for its long nose, and it great looks. Its body is bright colour, and the brown eyes looks so beautiful. But not all Probosis have the long nose. Only the male ones have that kind of nose shape. 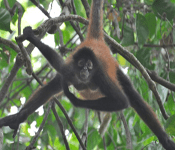 Don’t worry, your eyes are perfectly okay. And the picture is not edited or anything. It’s just the natural view of a Spider Monkey. This acrobatic monkey is well known for its long arms, even longer than its own body.

The spider monkeys really like to use their hands to swing around the tress, or doing something acrobatic  by using the arms. Not only hands, it legs are also long, looks a bit creepy but amazing on some ways. 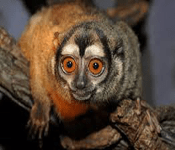 Beside the small monkey named Tarsisu in the explanation above, there’s another monkey that is also has the small size, called Night Monkey. They live actively during the night, because in that time there are not so many dangerous animals that will hunt them down.

Beside that criteria, the Night Monkey known for having such a big eyes. Even more big than the owls. The eyes are right with a huge black spot in the middle. And also, people love them because they always smiling. 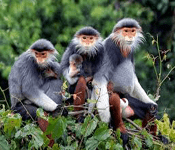 The next animals is the Douc Langur. It’s pretty easy to find it, because the numbers of Douc Langur can be found within the area of South East Asia, possibly Indonesia too. Not so many people know about this type of monkey yet because it’s rarely seen in this country.

As you can see, the monkey has such an unique face that consist of red on above and the white colour under it. It almost looks as a mask. Under the face, there’s a beard, the very big bushy beard colored white. 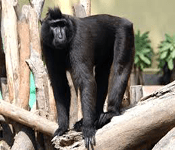 This monkey is very funky. Born with black colour fur, it has the hair that looks really stylish and modern. It also has some mustache, but not very bushy, just some hairs on the mouth area. An adult can grow up to 44 cm, and its horn is hardly visible, only 2 cm long. 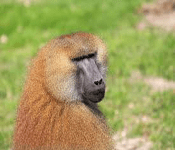 Who doesn’t know Baboon. Baboon can be included as one aggresive animals, especially if they have large numbers than you alone. One baboon seems careless, but when they unite as one, you’ll be doomed.

This furry little animal is actually the largest monkey species of them all. When growing into an adult, a baboon can have for about 27 kg in weight. Also, they have very long live, about 45 yeats in the wild, even doubled the lifespan of the other monkeys. 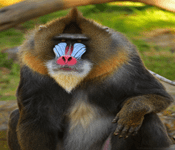 The next one is Mandriil. Not a surprise, the Mandriil is more and more aggresive than baboon. They even have such a “great” appetite. One single Mandriil can even hunt a deer, which has like 1,2 times height of them.

With the large foods, a group can live long enough for a week. Mandriil usually live up as a group, a very firm and large group. One group usually consists about 1.300 Mandrills. So, if you think Baboon is scary enough, wait til you meet this creature. 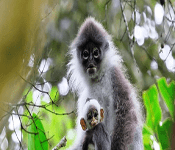 The Javanese Surili is the species of Surili that live up in the area of Java island. Usually they wil live in a conservations, because their ecosystem, their natural habitat is keep being destroyed by the people because of open land policy or illegal logging.

Actually, the Javanese Surili is a symbol of Bogor area, West Java. Unlike the two previous monkeys, this Surilis is more calm and only eat some small stuff like insects, mushrooms, flowers, leaves, seeds, even dirt.

The species above is not the end of our topic here. There are three species left on the small list that always we provided for you before the ending. So here are the three species or types of monkeys are in Indonesia that you can find in conservations.

The list of types of monkeys are in Indonesia ends here. There are 15 total we already described above, and that number is not the limit of course. There are few rare monkeys that still becoming a myth, because someone who have seen them usually only show their thought on it, not a proof.

But, maybe someday you’ll find another species of monkey, the new one that haven’t been found before. We hope that there will be some other new species of animals in Indonesia, that can be protected long before their extinction for our next generations.