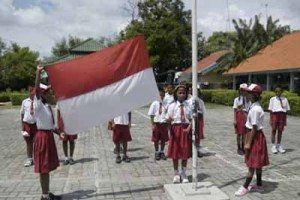 In general, schools in Indonesia are divided into several levels. For the level of introduction of school named kindergarten. As for the basic level Named Primary School or called SD.

However, it is also used to enhance creativity and train personality. The following is the interesting facts of Indonesian schools.

1. The students wear the proper uniform

The program requires every Indonesian citizen to attend 9 (nine) years of schooling in elementary level, ie from grade 1 elementary school (SD) or Madrasah Ibtidaiyah (MI) to grade 9 of junior high school (SMP) or Madrasah Tsanawiyah (MTs ). Thus, Indonesian Children must complete their study for at least nine years in order to be eligible for education. This is actually already very lagging compared to other countries that require the population to complete their studies until Bachelor Degree.

3. Almost the study hours is spent at the class

The study activities are spent almost at the class. The too many in-class learning systems in Indonesia, raises various problems in students. Some students lose interest in learning. There are some of them who are bored with the classroom atmosphere. Moreover, teachers’ teaching systems are sometimes less attractive to them. Here, some students complain that learning should not always be in the classroom. Some of them revealed that once in a while teachers should hold an outing class.

4. Almost 20.000 schools in Indonesia is not proper for study

About 20,000 schools are in improper condition because they have fewer than 60 students. The Ministry of Education and Culture (Kemendikbud) is evaluating the future of these schools, most likely to be closed, combined, or retained with various support and coaching support. Most of these unworthy schools are private schools, from elementary to high school / vocational schools. According to him, the feasibility of a school is also seen from the availability of teachers and good infrastructure.

5. Some schools in Indonesia apply 8 hours-length of study

The Ministry of Education and Culture (Kemendikbud) has implemented a policy of 8 hours of study with five school days. Trial implementation of this policy is questionable. Some students will be tired and stressed at school. Moreover, the world of childhood is the world of play. They would not like the day it was taken away to learn. However, there are already several schools in Indonesia that implement this system.

6. The favorite school in Indonesia is good on academic

The parents’ to drop their students in the most favorite school is by looking from the academic activity. The parameter is Indonesia is really well known. Good school is good academic. However, the academic is not all about that. There are many people who become success although their academic prestige is not good.

7. Extracurricular is always exist in every school

8. Science is the most favorite major in Senior High School

At the senior high school level, there are some major choices that exist in it. They are Science, Social, and Language. The smart students usually prefer to join science class. Since the Science is the favorite major for almost students. Why? The science children are identically clever students, having a diluted brain, diligent, and having brighter future. Meanwhile, Social or language students are considered as the pretty easy going students. Their brain is also not clever as Science students..

9. Mathematic is the most difficult lesson

Mathematics subjects become a very scary specter for students. The amount of complexity and complexity of the formula becomes the reason. In addition, the average of math teacher is usually a killer teacher who is fierce. Get away from remedial when repetition is a great gift that students feel. Some students think that Mathematics is the most difficult lesson ever. However, they should finish it.

10. The regional language learnt as their lesson

Local Content or often abbreviated as MULOK became one of the compulsory subjects in school. The material is taught vary according to place and culture where the school exists. The ones in central Java and East Java for example, there are Java language subjects, as well as Javanese arts. While in western Java there are lessons of Sundanese language. It aims to keep the heritage culture of the ancestors sustainable from generation to generation.

11. The most prestige organization is OSIS

OSIS is the most prestigious organization in school. The average member of OSIS is a student student who is quite popular in school. They will be known to all teachers and school students. In addition, OSIS is an organizational membership known to have good leadership. The working period of the OSIS is one year. So that the, stewardship routinely changed every year.

12. Scouting is a mandatory

Scouting is a mandatory extracurricular at school. Here, the junior students will be taught a leadership by the senior. The scouting is usually done on Friday after school. There is also an annual camping for scouting. The students will be trained how to be independent person and to be good in a community as well.

Student orientation in Indonesia is called MOS. It is a mandatory ritual for new students in each year. MOS is held for one week, beginning of the new school year. The goal is for the introduction of school programs, vision mission, as well as the existing order. What is unique about this activity is that participants are required to wear unique attributes, such as colorful ponytails, odd costumes, bags of wheat bags, and conical hats.

Those are the interesting facts of school in Indonesia. Some of them are pretty terrible. The government in Indonesia is still on the way to repair the system of education in Indonesia.

13 Importance of Entrepreneurship Development in Indonesia