10 Facts about Education in Indonesia 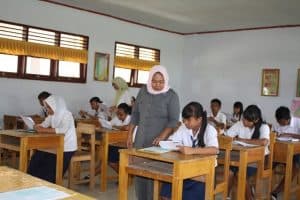 Indonesia is a country that is well known of the great number of natural resources. Its beautiful nature and archipelago seems like become the invitation for a people abroad to visit Indonesia. However, the question about how the human resources in Indonesia could be a point too. That is why the government will never be exhausted to always improve the education system to support their human resource.

Not all people want to know about the education system in Indonesia. Some of the visitor will just be fascinated with the nature without recognizing the education. That is why we would like enlarge the 10 facts about education in Indonesia.

Those changes of curriculum in Indonesia was done for many considerations. It is because the ministry of Education was always changed and they found that the curriculum was not effective. That is why there are so many changes in curriculum during 50 years.

Depend on a survey that is conducted by PISA (Programme for International Students Assessment) in 2015, the students of Indonesia is the happiest students compared to other students from abroad. Although the academic test shows the bad result for Indonesia, but there is a good news for the mental condition or students Indonesia. That is why they are categorized as the happiest students.

In Indonesia, students mostly learn the exact science at school. The education system pushes the student to study a lot of exact science rather than the practical skill. Each student has the different ability to accept the material. A number of students would rather learn art than study math or physics. If you recognize, you study more exact science than physical sport or art during your school life. You stay at class during 5-7 hours at school and go out for less than forty five minutes of rest time. That is why you feel so bored at class.

In Indonesia, most of the parents (for the middle economic people) have already sent their children in age 3 or 4. It is because they want their children to study early. The most of parents are obsessed to make the children become multitalented. Thus, they send their children to musical school, mathematics school, or English course after school.

The data from Ministry Education and Culture of Indonesia shows that 1,3 million from the total of 1,6 million of teachers Indonesia got the score under 60 for the rate of the score 0-100. The test was done for all of teachers who come from all of regions and level of schools in Indonesia. Based on Teacher Employment & Deployment data, the distribution of the teachers in Indonesia also doesn’t spread well. It shows that 66% of the schools in the remote area lacks of teachers. Meanwhile the rate for the lack of teachers at city area is just 21 %.

Cheating while doing a test is normally happen Indonesia. Not all of students in Indonesia do cheating, but the rate of cheating in Indonesia could be categorized as high. The recognition of honesty toward the student needs improvement. All The elements of education are trying to resolve this problem. Honesty Canteen, Honesty stall, and honesty corner is now exist at schools. Hopefully it could help to improve students’ honesty.

It was since 2015 the government applied computer based test for national exam. The system is aimed to avoid cheating among the students. Ministry of Education in Indonesia expects this system could be an effective way to remove cheating habits in Indonesia. In Computer Based Test (CBT) each student gets the different exam questions. The time for doing CBT is also limited. The students will have no time to ask the answer to other students or even cheating. If you want to see more for national exam you could click History of National Exam in Indonesia