The implementation of a traditional ceremony of a society is generally very interesting because it has the uniqueness, sanctity, and moral values contained in it. Below will be listed some of them 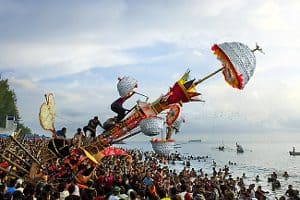 This one ceremony is actually more related to religion, based on Muslim beliefs but only found in Padang Pariaman, West Sumatra.

Thus, it becomes a distinctive tradition in the area. Tabuik ceremony was held as a form of commemoration of the death of the son of Prophet Muhammad SAW in a war in the time of the Prophet era. Conducted on Asura Day every 10 Muharram year of Hijri.

Meanwhile, a few days before the date of the ceremony, people will work together to create two tabuik. Then, on the day of the event, the two tabuik were brought to the sea at Gondoriah Beach. One tabuik is held by about 40 people, behind them, a group of people with traditional clothes accompanied, along with the traditional music players. Then, both tabuik are floated out to the sea. 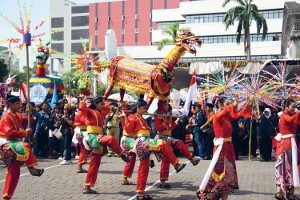 This ceremony was held to mark the coming of the fasting month of Ramadan. But, because it’s only held by the people of Semarang, then this Dugderan ceremony became a kind of traditional ceremony. The word “dugderan” itself comes from the mix of the sound drum with a bamboo cannon that’s usually fired during the month of fasting.

The ceremony is held exactly the day before the first fasting month is held, from morning until late afternoon. In this traditional Indonesian ceremony, the community held a “warak ngendok”, or paraded the beasts of a makeshift bodily goat with dragon-headed and golden scaled skin. This custom animal is made of colorful paper. In addition, they also held people markets, drum band attractions, traditional customs clothing from many archipelagoes, to performing many arts from Semarang City 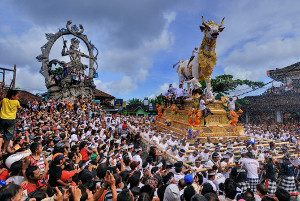 Ngaben in Bali is a ceremony of burning or cremation of Hindu believer bodies in Bali. To carry out this Ngaben ceremony, the family of the deceased will make a  coffin shaped like an ox for the corpse to be carried on. The coffin is made of wood with a model that is very majestic and assisted by the surrounding community.

Then, the body was brought to the masses, and lastly, it’s burned along with the coffin, in a solemn ritual. Ngaben ceremony always involves with fire, the fire used there have 2 types, namely in the form of concrete fire (real fire) and abstract fire (fire coming from Puja Mantra Priest who lead the ceremony) 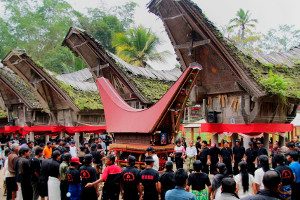 Rambu Solo is also a ceremony of death, which was inherited by Toraja society for generations. The family of the deceased will hold this ceremony as a sign of the final honor. Then, the body will be taken to the grave located on the cliff’s cave, that is The Londa cemetery. At the same time, they also brought a wooden doll that had been made before, whose face is very similar to the deceased person.

Meanwhile, Mapasilaga Tedong ceremony is a buffalo fighting event. Previously, it will start with the Buffalo parade, ranging from male buffalo, albino buffalo, to Buffalo salepo which has black spots on its back. After the buffalo fights, it will be followed by a typical Toraja indigenous slaughtering procession, called Ma’tinggoro Tedong. In the procession, the buffalo must immediately die with one slice. 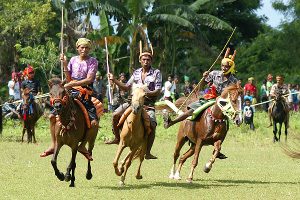 In this traditional Indonesian ceremony, there will be two groups that do mock wars. Each group of more than 100 youths will be going at each other armed with lances of wood with a blunt end, and also wearing armor in their custom fighting.

On the other hand, Pasola also means a game of agility with throwing a javelin over a horseback riding between two opposite groups that usually happen in February or March of each year, the ceremony will be held to convey a praise to God, so that their harvest that year can be successful. 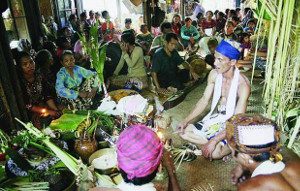 Aruh Baharin is a traditional ceremony in Indonesia which is always held by Dayak Society after harvest season of rice huma. This ceremony is done as a condition to ask permission of the ancestors so that they can consume the harvest from the rice they plant. This Traditional ceremony is commonly done in city hall.

In their belief, if the harvested rice is eaten without the permission from the ancestors then a disaster is believed to befall upon their village in the future.

Other Traditional Ceremonies in Indonesia (7-15)

Beside what i explained above, there are also other traditional ceremonies all over archipelago which is still held until now, as follows:

This indigenous ceremony in Indonesia subsequently came from West Sumatra.  It’s called Batombe, Batombe is a ritual of reprisals rhyme performed by the young girl. At first, this ceremony is done each time one of the villagers is finished building a gadang house, but today, batombe ceremony is also performed when there is a wedding event.

Aruh buntang is a traditional ceremony of the Dayak tribe of Dusun Deah done to deliver the soul of the dead to the place in the next life. Aruh bambang ceremony performed for 3 to 14 days with a mixture of singing, dancing, and music. The songs, dances, and music that are part of this ceremony are considered very sacred to the locals.

Etu is a traditional boxing ceremony performed by the people of Flores to test the virility among the youth. Unlike conventional boxing,boxing gloves worn by boxers are only made of fibers from coconut. One hand is forged to hit, and one hand is left without a holster and is used only to deflect an opponent’s punch.

Katiana is a blessing ceremony for Pamona (Poso) women who were having their first pregnancy. Generally, the ceremony is performed when the gestational age has reached 7 months. This Katiana ceremony is usually done when the fetus is 6 or 7 months old.

Katoba is a traditional ceremony in Indonesia conducted by the Muna Tribe in Southeast Sulawesi. This ceremony is reserved for children who are near the age of 6 years old (6 to 12 years old) a day after they are circumcised. The children in this ceremony will be given some advice by a priest.

Macceratasi is a traditional ceremony to shed animal blood into the sea by the Bugis, Mandar and Banjar coastal communities of Kotabaru. This one ceremony in Indonesia is done as an expression of gratitude for God’s gift of the sea fishes they have catch for one year.

Mallassuang Manu is a martial arts ceremony of Mandar tribe who lives in Kecamatan Pulau Laut Selatan, Kotabaru, South Kalimantan Province. In this traditional ceremony, young people release several pairs of cocks and hens as a form of praise to God so that they are immediately blessed with a soulmate.

Manulangi Natua-Tua is a traditional Batak ceremony performed by feeding to their elderly parents. This ceremony is a form of the devotion of Batak society towards the parents who have raised them.

Mappanretasi is a traditional ceremony of Bugis tribe that is hereditary held every April in Pagatan, Tanah Bumbu, South Kalimantan, Indonesia. The ceremony is done by floating various foodstuffs to the sea as a form of gratitude to God for the collection of the abundant sea fishes throughout the year.

Indonesia is a country with a tremendous cultural diversity. One of the real evidence is that Indonesia has a unique diversity of traditional ceremonies that can not be found in other parts of the world and this type of tradition needs to be preserved. By keep practicing it and spreading the words about the purpose of this long time tradition then we can truly appreciate the culture that’s truly Indonesia.