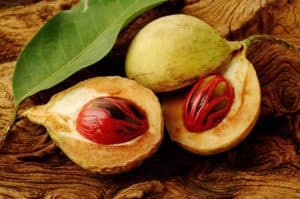 Nutmeg, or also called Pala in Indonesian, is a spice that grows on an evergreen tree with the scientific classification Myristica fragrans. It is a native spice of Banda Islands in Indonesia and now is globally used.

Commercial products derive from the nutmeg tree that are most commonly known are the seed (people refers it as the nutmeg) and the dried lacy reddish covering of that seed (called as mace).

Several other commercial products are also produced from this tree are their essential oils, extracted oleo-resins, and nutmeg butter.

Nutmeg tree is not only grown in Indonesia, but has been successfully grown in other Asian countries such as Penang Islands (Malaysia), Indian and also in the Caribbean, Grenada. The nutmeg tree species that grows in Indonesia are M. argantea which produces ‘Papuan’ nutmegs from Papua and M. fragrans which is the native to Banda Islands in Moluccas.

The main used of Indonesian Nutmeg are for food processing industry (as spices for seasoning meat products), for cooking as in soups, sauces, baked goods and spice mix such as curry powder in Japan. Besides that, nutmeg is also used in the perfumery and pharmaceutical industries. And recently there is a development for using nutmeg as a natural control for insects that infest stored cereal grains.

It is already stated that nutmeg is native to Banda Islands in Indonesia. The spice was very rare in Europe and no one knew where it came from as the Arab traders who sold it kept the location of source a secret. Nutmeg was so popular in Europe during the plague and it was sought after by people who believed it could cure the ill effects.

In August 1511, a Portuguese general named Afonso de Alberquerque conquered Malacca which was a vital trading port in the southern coast of Malaysia. When he was there, he heard about Banda Islands where the nutmeg had been coming from all those years. He then sent three vessels which arrived in the islands in 1512 to buy nutmeg, mace, and cloves before travelling back.

At that time, the Portuguese took a full control of the nutmeg trade, until a group of Dutch came to Indonesia. The Dutch East India Company (VOC) established small colonies around the area in a bid to control the flow trades. The company started to do a monopoly on the production and trade of nutmeg and even waged a bloody battle with the Bandanese in 1621.

During the 17th century, VOC constructed a comprehensive nutmeg plantation on the islands. However, they were not the only occupant of this region, The British at that time also came to Indonesia and successfully negotiated with the village leaders to protect them from the Dutch in exchange for a monopoly in their nutmeg.

During Napoleonic wars, the British succeed to take control of the Banda Islands from the Dutch temporarily. They started to transplant nutmeg trees, complete with soil, to Sri Lanka, Penang, Bencoolen, and Singapore.

Then, from these locations the plants were transplanted to their other colonial holdings like Zanzibar and Grenada. But not long after that the Dutch retained control of Banda Islands until they formally recognized Indonesia’s Independence in 1949.

The most common product from Indonesian Nutmeg is the seed. The seed is roughly egg-shaped and about 20 to 30 mm ling and 15 to 18 mm wide, weighing about 5 to 10 g dried. The seed is usually used in powdered form. The first harvest of nutmeg trees takes place 7 to 9 years after planting, and the trees reach full production after twenty years.

The other products from nutmeg that are commonly used are essential oil and nutmeg butter. For further information about these two products, we will explain about the making process below:

The oil is usually used widely in perfumery and pharmaceutical industry. We may found nutmeg essential oil in toothpaste and cough syrups. Indonesian has been used nutmeg oil in generations for disorders related to the nervous and digestive system.

This product contains about 75% of trimyristin which can be turned into myristic acid that can be a replacement for cocoa butter. The other use of nutmeg butter is it can be mixed with other fats like cottonseed oil or palm oil and may be used as an industrial lubricant.

Nutmeg is used widely in dishes, and we must know that it can impact our health in variety ways. The nutritional values of nutmeg are vitamins, minerals, and organic compounds related to the essential oils. Besides that, nutmeg also contains dietary fiber, manganese, thiamin, vitamin B6, folate, magnesium, copper, and maceligan. These rich components then make nutmeg so nutritious and have some health benefits.

It is known worldwide that Indonesian Nutmeg is a spice that has some health benefits. This spice has ability to relieve pain, soothe digestion, strengthen cognitive function, boost skin health, increase immune system, prevent leukemia, and many more. For further information about its benefits, we will explain it below:

Nutmeg contains a component that is similar to menthol that has ability as a pain reliever. The pain reliever will work to reduce associated pain from wounds, injuries, strains, and chronic inflammation from arthritis.

As already mentioned above, nutmeg has dietary fiber as its nutritional content. The dietary fiber is believed may stimulate the digestive process by promoting peristaltic motion in the smooth muscles of the intestine. This ability will also reduce the frequency and discomfort of constipation and other intestinal issues.

Nutmeg has an active antibacterial component that will fight condition like bad breath. It will kill the bacteria and also boost the immunity in gums and teeth. Because of this benefit, we may find nutmeg extracts in toothpaste and mouthwashes, particularly in organic or herbal varieties.

The small amount of nutmeg in warm milk may be a remedy for insomnia. Nutmeg contains a high content of magnesium that will reduce nerve tension and stimulates serotonin which creates feeling of sedation. Besides that, nutmeg also contains trace elements of narcotics which will stimulates neurotransmitter that will help relaxation.

Nutmeg contains specified essential oils called myristicin and maceligan. A study shows that these compounds are able to reduce the degradation of neural pathways and cognitive function that may be presents in people with dementia or Alzheimer. These compounds will slow those effects and make our brain functioning at healthy level.

Meanwhile nutmeg from the other country is milder in flavor and lighter in color. Other producers and exporters are Grenada, India, Malaysia, Papua New Guinea, Sri Lanka, and Caribbean islands.

They aim the import markets such as European Community, the United States, Japan, and India. On the other hand, Singapore and the Netherlands are major re-exporters.

Here is a short explanation about Nutmeg, the native spices to Indonesia. Indonesia is a rich country and has so many hidden “germs” that has been known since a long time ago. We will explore every unique fact about Indonesia and share it on this blog. Please stay tune and wait our next article about Indonesia.