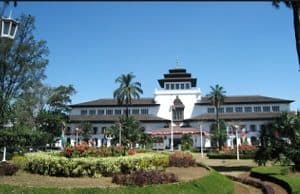 Bandung is the capital city of West Java and the largest metropolis in the province. Bandung is located 768 metres (2,520 feet) above sea level, approximately 140 kilometres (87 miles) south east of Jakarta.

There are 2 municipalities and 38 districts in total, making Bandung nation’s fourth largest city by land area, the third largest city by population with over 2.4 million people. The most well-known symbols of Bandung is Gedung Sate. Many battle from the independence period also occurred in this city. Today, Bandung has become one of the main destinations of tourism and education.

There are a lot of recorded history happened in this city, such as the establishment of the first technical college in Indonesia, Technische Hoogeschool te Bandoeng (TH Bandung) which is now known as Institut Teknologi Bandung (ITB). Bandung was also the venue for the 1955 Asian-African Conference, where the Prime Minister of India, Jawaharlal Nehru said in his speech that Bandung is the capital city of the Asian-African.

When it come to traffic and safety, it’s goes without saying that Bandung is less crowded than Jakarta, even by a bit. In 1990, Bandung was chosen as one of the safest cities in the world based on the survey of Time Magazine. Also when it come to the order of the city and buildings, Bandung is one of the most creative city in Indonesia. A consortium of several international NGOs to make the city of Bandung as a pilot project for the most creative cities throughout East Asia in 2007.

Since 9,500 years before present, around the prehistoric era, the oldest written historical reference to the Priangan region in the 14th century. It was found in what used to be one of the settlement within the Kingdom of Pajajaran. Few earlier prehistoric archaeological findings of early human settlements was found in Pawon cave in Padalarang karst area, West of Bandung.

Then, there are also few around the old lake of Bandung.  In Rancaekek area, Bandung district, east of Bandung city, the ruin of Bojongmenje temple was discovered and estimated to be dated from early 7th century CE, around the same with Dieng temples of Central Java period. Though, there are assumption that say it can be even earlier than that. 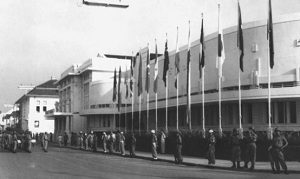 The Dutch East Indies company (VOC) set up a small plantation area in Bandung around the 17th and 18th centuries.

Then, in 1786, a road was built to connect Batavia (now Jakarta) to , Bogor, Cianjur, Bandung, Sumedang and Cirebon. In 1809, the Dutch Indies Governor H.W. Daendels built a 1000 km road merging the west and east coasts of Java called The Great Postweg (now Jalan Asia-Afrika).

This is due to Napoleon Bonaparte’s disturbance, making the ruler of the Netherlands and its colonies, Louis Napoleon felt restless enough that he ordered Daendels to improve the defense system of Java island. The road was finally finished in 1810.

The rapid growth of Bandung started from the area around the Jalan Asia-Afrika, the Javanese alun-alun (public square), the former residence of the Bupati, and the great mosque. Around 1850, there were almost 12,000 inhabitants in Bandung because of the relocation of some Departments from Jakarta to Bandung. The first major railroad in Indonesia was built few years after in 1880. In 1929, Bandung become the city where the ‘Framework plan’ city plans applied and success, covering an area of 12.758 ha.

The concept of garden city which was applied after that was a big success too. The Parahyangan mountains surrounding Bandung become a place mainly for tea plantations before cinchona (kina) plants were introduced by Franz Junghuhn in the 19th century. On the other hand, the status of gemeente (municipality) was given to Bandung in 1906, as well as the stadsgemeente (city municipality) in 1926.

The fact that Bandung is in a low area between two mountainous regions, is making the Dutch East Indies government wishing to move the capital from Batavia to Bandung. The plan, however, fail as the Dutch failed to reclaim Indonesia after World War II. 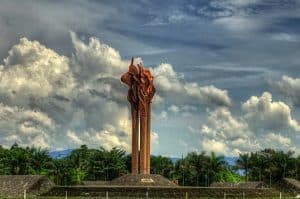 Differences between the political point of view of the society began to happen. For example,  the main goal of several extreme Islam groups in West Java was to establish an Islamic state (Darul Islam).

One of the most well-known movement of this group is  “Laskar Hitam” in which Otto Iskandardinata, RI’s Minister of State in 1945 was kidnapped and killed. He was killed along with the regent of Priangan, Poerdiredja, the mayor of Bandung, Oekar Bratakoesoemah and the leader of Indonesian national committee (KNI) in Priangan, Niti Soemantri.

Beside the clash on political point of view, the most unforgettable momentum is Bandung Lautan Api or “Bandung as the sea of flame”, an event to remember the movement Bandung people do under the treat of the Dutch.

The Dutch Politionele acties (“police action”) was sending an ultimatum for the Indonesian combatants in Bandung to leave, but instead of just simply did that, the southern part of Bandung was purposely burned down in an act of open resistance. This is how the revolutionary song “Halo-halo Bandung” was born.

Not just by purposely burned down the southern part of Bandung, in the very same day, on March 24, 1946, Mohammad Toha succeeded detonated the dynamite in warehouses of ammunition. This act of him, killed several Dutch, Japanese troops in the area as well as himself with a great explosion, which created a small lake (“situ”) in Dayeuh Kolot. To honor his fight, the main street in the area is name after him, “Mohammad Toha Street”. 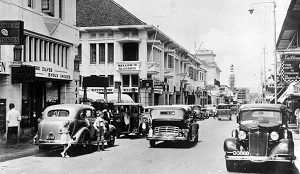 This conference was held with the purpose of preparating the establishment of the Non-Aligned Movement block in Beograd (former Yugoslavia) in 1961. With a duty creating new constitution to replace the Provisional Constitution of 1950, a new parliament body with the name of the Constitutional Assembly (Konstituante) was established after the election in 1955.

Sadly, even after few times meeting held in Bandung, there is no significant result. A minor traffic accident—collision between 2 motorcycles—occurred in May 10, 1963 involving an ethnic Chinese student and an Indonesian student, resulting into a racial brawl. This event become the start of a movement against the establishment of ethnic Chinese tribe by Baperki (an ethnic Chinese organization influenced by Indonesian Communist Party/PKI) and NASAKOM (Nasionalis, Agama dan Komunis) ideology of President Soekarno.

This movement become out of hand as other organizations used the event to start a large scale racial riot in Bandung which spread to other cities such as Jogjakarta, Surabaya, Malang and Medan. Muslimin Nasution and other leaders of Student Council become suspects and arrested for starting the whole riot.

The Military Chief Of Staff, General Nasution escaped an assassination attempt during the 1965 coup attempt by 30 September Movement (G30S) to Bandung. This movement has cost many life of important people in the country and one of the darkest era of Indonesia.

General Nasution’s attempt of escaping as PKI soldiers come to his house, has cost him his own younger daughter, Ade Irma Suryani. Ade Irma Suryani were 5 years old when she was shot 6 times by PKI soldiers as her father escape through the back door. To commemorate the sacrifice of Ade, Taman Lalu Lintas was built in the memory of her.

Bandung in the 21st Century 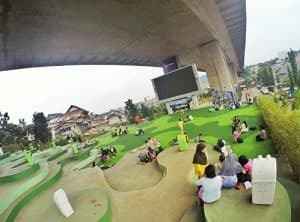 As time goes by, Bandung become one of the most favorite city to visit for a vacation to almost a lot of people both local and inter local.

The fact that you can find almost anything in the city—shopping market, food market, family-friendly park, etc—making Bandung a complete packet to enjoy for your annually holiday.

Culinary has always been something Bandung very good at as we can find almost a lot of traditional foods that left you speechless as you taste it for the first time.

Under the mayor, Ridwan Kamil, a lot of abandoned and neglected area in Bandung were rebuilt so it can be used again. In short years, Bandung has become more completed and modern. New parks spread all over the city, such as Taman Jomblo, Taman Film, Taman Musik, Taman Sungai Cikapunding etc. Overall, in the tourism industry, Bandung has developed quite significantly.

Indonesian Army Strength – Duties and Achievements in the World