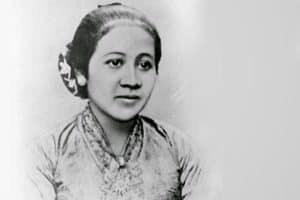 Raden Adjeng Kartini, one of Indonesian Heroes, is someone from the Javanese aristocrat class, the daughter of Raden Mas Sosroningrat, the regent of Jepara. Kartini, usually referred to by her title Raden Ajeng, was born into an aristocratic Javanese family on April 21, 1879.

She is the daughter of R.M. Sosroningrat from the first wife, but not the main wife. At that time, polygamy was a common thing. Kartini was born from the Javanese patrician family.

From European books, newspapers, and magazines, Kartini is interested in European women’s thinking. There was a desire to promote native women’s status, where the social conditions of the day were native women are in a low social status. She attended school until the age of 12. Under the old Javanese tradition, she was isolated at home to be arranged for marriage. During this isolation period, she wrote letters to her foreigner’s friends abroad. The letters were compiled into a book called “Habis Gelap Terbitlah Terang” (“Out of Darkness Into Light”) and published after her death.

In 1964, Long after Kartini’s death, then President Soekarno on May 2, 1964, issued Presidential Decree No.108 of 1964 which contains the determination of R.A. Kartini as National Hero of Independence and also the determination of birthday Kartini 21 April to be commemorated every year as the big day. she was declared an Indonesian national heroine by President Sukarno and her birthday was subsequently named Kartini Day, which is celebrated annually.

Therefore, every April 21, we as Indonesian citizens especially women celebrate Kartini’s day, from year to year as far as we can remember every Kartini day. Then, at school we are obliged to wear traditional custom area of clothing from various corners of the provinces or perform activities related to femininity. Although precisely during history Kartini herself instead is trying to break the dominance of men where women can go to school to get an education and get the same rights as men.

Meanwhile, this determination then experienced a debate among the wider community. Kartini’s supporters reinforce this stipulation by arguing that Kartini is not only a female emancipation leader who elevates Indonesian women but also a national figure. Because of the way of thinking, Kartini ideas and efforts cover the national struggle for the benefit of the nation interest widely.

In addition, the other party proposed that the celebration of Kartini Day be held simultaneously with Mother’s Day on December 22nd. The reason is that some people do not feel that Kartini deserve more attention than other Indonesian women heroes like Dewi Sartika, Martha Christina Tiahahu, Cut Nyak Dhien and others.

On the other hand, there are also some counter-responses such as the area where Kartini fought is considered to be limited to Jepara and Rembang; Kartini never carried weapons against invaders; Kartini is considered to take a pro-stance against polygamy (as opposed to the feminist view of the meaning of women’s emancipation) and other various reasons.

The Meaning and Purpose to Commemorate Kartini’s Day

Kartini Day is a day commemorated to coincide with the birthday of National Independence Hero Raden Ayu Kartini (RA Kartini) on 21 April every year since 1964 by all Indonesian provinces. The objective of Kartini Day is to commemorate and honor the struggle of R.A. Kartini to realize the equal opportunity between men and women in the modern era especially in the field of education and in general gender equality in all fields. This celebration should have a profound meaning of women’s emancipation and to remind all levels of Indonesian society to continue to be consistent in fighting for gender justice.

She can be regarded as one woman who is quite smart, thanks to her intelligence so she finally managed to be known by the name of women emancipation efforts. Why is Kartini known for women’s emancipation? it is because Kartini struggles to bring education to the girl and able to work to help the family. Thanks to Kartini’s efforts then she managed to lead the movement of women who are quite influential at the time. Although the struggle is not through war but through modern thought which is more effective.

On the other hand, Kartini Day tradition is certainly not a merely ceremonial event and limited to the use of bun and kebaya for Indonesian women. Moreover, the commemoration of Kartini Day should be directly and decisively related to the equality of rights between women and men. As follows:

Like the other celebration, In Kartini Day Celebrations, Indonesian students dressed in customs and parade culture to celebrate Kartini Day. The moment is also one way for schools to provide cultural lessons to their students. The students competed in a parade of traditional clothes from various regions of the archipelago as well as local dance and songwriting performances. They also immerse themselves in the festivities of various traditional games such as soccer wearing sarongs, bottle feeding competitions, clogs race, sack race and tug of war.

There are several ways about how all women in Indonesia celebrated Kartini day, as follows: 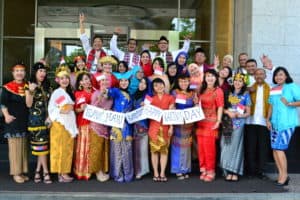 Firstly about the tips to celebrate the Kartini day is to use custom clothing from the areas that existed in Indonesia. Our country is famous for a very diverse culture.

The second is also still the same about the ways to celebrate Kartini day is by holding a race. This has been done by some people because these methods are very simple. Although it looks very simple but actually this can motivate the woman participating because by holding this Kartini competition they can show the creativity skill that the woman have.

Nowadays, Kartini race has a lot of variety and you can implement it in accordance with what you like, and that often done during the Kartini day that is to do poetry reading contest. By doing the competition then we can train the woman to be able to perform bravely in public

Furthermore, also about how to celebrate the Kartini day is by singing a song that’s still related to this country Indonesia. You can just sing a song that might simplify your love to our country. Many song anthems which exist in Indonesia and related to Kartini’s continued effort. It is very simple indeed and this can be done by many people. A simple way but at least we can participate in commemorating of the Kartini day.

Now the fourth is very often done when celebrating the Kartini day because this is very exciting. The next method is to hold a grand parade or tour around the city with a poster containing messages on the day of Kartini. People used to really love to watch the parade around the city while those performers carrying posters of Kartini. The parade like this is usually accompanied by a drum band instrument. The poster of Kartini day is also very diverse then there is also a picture of our mother Kartini and many others important woman during occupation era.

The last is also very common in commemorating the Kartini day is by way of holding a flag ceremony. Besides the flag ceremony that is conducted every Monday then in this case also you can do the ceremony for Kartini. Uniquely again, the officers and inspectors of this ceremony even led by a complete costume of kebaya wearing woman. Today’s ceremony is considered to be unique and different.

The ceremony is to appreciate the services of R.A Kartini which has been very beneficial for our nation and country. So not only the flag raising ceremony but the celebration ceremony of the Kartini day also can be done though it looks trivial but it has profound meaning that you have to understand also.

Kartini’s day is an unique national celebration towards Indonesian people. A day where many people remember what it’s like to fight for freedom and independence during colonial ruling under the Dutch administration. As well as to encourage us to know that woman does indeed play a part in the independence of Indonesian from foreign oppression.