In Java Island, especially the city of Yogyakarta has a distinctive art and culture hub, even regarded as the center and source of art in Indonesia. We can find a variety of typical Yogyakarta art and its cultures that are well known. Yogyakarta is an area in Central Java which, when viewed in terms of art is unique and interesting, this is because this area is still led by a Sultan who still holds firm old beliefs, especially art. Yogyakarta people also still regularly hold art events, with the sole purpose, to remember their ancestors. One of the factors why art is so thick here because Yogyakarta is a place of the civilization of the first Hindu-Buddhist kingdom. Here is some typical culture of Yogyakarta. 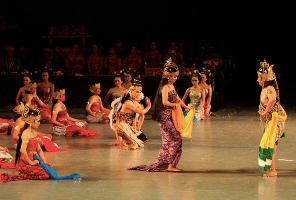 Ramayana Ballet is one of the most famous art in Yogyakarta, usually, foreign tourists are very fond of this show. Usually, this ballet is performed in Prambanan Temple. This ballet tells about the opposition between the good minds of perception in Sri Rama (from the Ayodhiyapala state) against the evil that existed in Rahwana (the wrathful Maharaja of the Alengka state). The ballet has four different episodes in each show, such as the loss of Dewi Shinta, Hanoman Duta, Kombokarno Leno, and the Holy Fire. The ballet is staged every May to October. 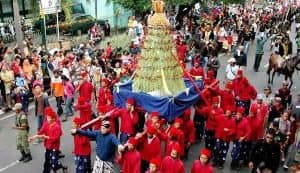 This event is a Javanese tradition event commemorating the birthday of Prophet Muhammad SAW. The people of Yogya assume that if they participate in this commemoration then they will get rewarded in the longevity of life from the God Almighty and as for the terms and condition, they must chew betel leaves in the yard of the Great Mosque from the beginning of the event started till finish. 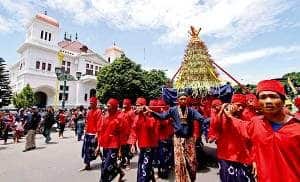 Grebeg Maulud ceremony is the culmination of the birth ceremony of the Prophet Muhammad SAW held on 12 Maulud, after the inclusion of gamelan Kyai Nogowilogo in the festivity the Keraton called “Bendhol Songsong” then reached the culmination of this event to bring food condiment shaped like a mountains to the Great Mosque and distribute it to the community after prayer.

Then this food mountain will be planted in the agricultural area to fertilize the soil for the next harvest. 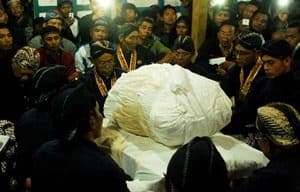 According to history, Cupu Ponjolo has three items, found in the sea by Kyai Panjolo who was fishing in the sea. By the people of Mendak Village, Girisekar, Panggang, and Gunung Kidul. The items are believed to be able to give symbols and predictions about the future of the village. The three cupu are placed in a box and wrapped in hundreds of layers of mori cloth, stored in a special room.

During the ceremony, the mori cloth wrap is opened and researched one by one to find the picture or motif on the mori cloth. The image becomes a symbol or a prediction of what will happen in the future. This ceremony is usually held on the eve of the rainy season (September-October), on the market day Kliwon

One characteristic of Yogyakarta culture, especially Java is the art of wayang. The art of wayang is a cultural creation of Central Java society which in each story has a philosophy of life of Javanese society, such as stories of heroism, previous kings or Javanese mythology. Javanese society is very fond of wayang because every story contained in this puppet art can be used as the guidance of society in maintaining Javanese culture itself. In every wayang play is always led by a Dalang who understand the plot in the puppet. This wayang performance is always accompanied by gamelan music.

In Yogyakarta, the keris is the most famous traditional weapon and often times is worn by dignitaries to upheld their status in the community. The Kris was also given honorary titles such as “Kanjeng Kyai Kpek” and so on. In addition to Kris, there is also a spear as an heirloom. They are highly respected and honored. Among others are “Kajeng Kyai Ageng Plered”, “Kanjeng Kyai Ageng Baru”,” Kanjeng Kyai Gadapan “and” Kanjeng Ageng Megatruh “. 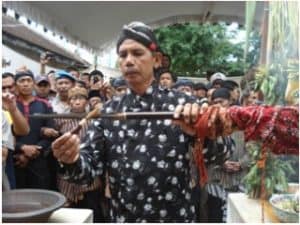 They were performing a drainage and washing ceremony of water in jars or vases called Enceh. It is said, according to the Javanese society norms when one is drinking this water then he/she will avoid from calamity or distress, preventing disease, and given youthful radiance. 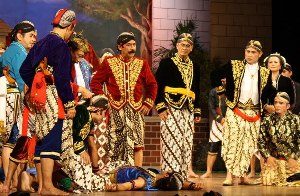 Ketoprak is one of the Javanese arts cultures in the form of presentation like a drama, but ketoprak has a distinctive story that contains the history of Javanese society especially past kingdom. Ketoprak played by some people who tell a role in one story, the costume and dressed in this drama are always adjusted to the story line and the time it’s depicted. Usually, in every play ketoprak, they always accompanied by Javanese songs. 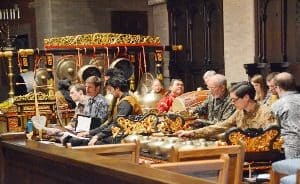 Gamelan is a special instrument of Central Java especially Yogyakarta. This gamelan music is often used in traditional ceremonial in Yogyakarta or as musical accompaniment in the palace of Yogya. One of the places in Yogyakarta where you can see gamelan performances is Kraton Yogyakarta. On Thursday at 10:00 to 12:00 pm they held a gamelan as separate musical performances. 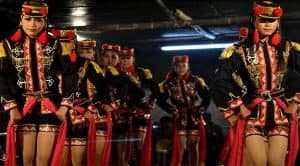 Art Dance Angguk is one of the many types of folk art that exist in the Province of Special Region of Yogyakarta. It’s a native art in the form of dance accompanied by people words that contain various aspects of human life, such as social relationship in community, character, advice, and education. In this art, they also recited sentences that exist in the book of Tlodo, which although inscribed with Arabic letters, but was sang with Java tunes. The song is sung in between the dancers and the accompanist drumming. In addition, there is one thing that is very interesting in this art performances, namely the presence of players who “ndadi” or experiencing trance during peak performance. 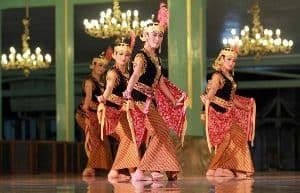 Golek Menak Dance is one of the classical dance styles of Yogyakarta created by Sri Sultan Hamengku Buwono IX. The creation of the Golak Menak dance originated from the idea of the sultan after witnessing a Wayang Golek Wayang show performed by a puppeteer from Kedu area in 1941.

It also called Beksa Golek Menak, or Beksan Menak. It contains the meaning of Menek Golek puppet show. Because he loved the Wayang puppets culture so Sri Sultan planned to make a show that is the wayang dance.

There are several other culture of Yogyakarta which you may want to know, as follows:

12. Bekakak Ceremony: Bekakak ceremony held every month of Sapar, Friday between the date of 10-20, was done to honor Kyai and Nyai Wirasuta who became a servant of Hulu I Penanggang and was in charge of carrying an umbrella for Pakubuwono I.

13. Tunggul Wulung Ceremony: Medium community living around Sendang Agung, Sleman always held a ceremony tunggul wulung every Friday Pon, the event is intended for thanksgiving to God and Ki Ageng Tunggul Wulung and his wife for the abundant fortune.

14. Labuhan Pantai Ceremony: The ceremony is aimed at the Queen of the South Sea by offering clothes, makeup tools and flowers for the Queen. For the welfare being of Ratu Kidul.

17. Dolanan Anak: Dolanan anak is a traditional game of children that are almost extinct. However, some traditional events in Yogyakarta often organize this dolanan event.

18. Traditional House: The traditional house of Yogyakarta Special Region called Kencono Kraton Kraton Yogyakarta is a Pendopo building. The courtyard is very large, overgrown with plants and equipped with several bird cages. In front of the Kencono Ward, there are two statues of Gupolo.

19. Custom Clothes: Yogyakarta men wear custom clothes in the form of head cover, suit with the closed neck and keris tucked in the back waist. He also wore a batik cloth patterned the same with the woman.
While women wear kebaya and batik cloth. Jewelry in the form of earrings, necklaces, and rings.

20. Jathilan Dance: Jathilan dance is a dance with fellow warrior scenes riding and carrying a weapon of war. This dance puts the figure of a mighty war warrior on the battlefield and carrying a sword weapon.

The wide variety of culture in Jogjakarta can be attributed to its deep existence in the history of Java island as a whole. As the Jogja kingdom plays a central role in ruling the archipelago, hence many people created various tradition to identify themselves as Javanese. By appreciating this unique culture then we can better understand the value of arts that permeated Indonesian citizens.