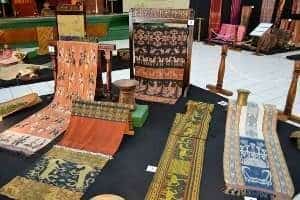 Tenun is an artful Indonesian technique of making a fabric by weaving different colours of threads. The materials for the threads include cotton, silk and any other kinds. The process of making the fabric is an art itself.

The colors and the patterns of  Tenun consist knowledge, cultures, beliefs, and social values of a particular region in Indonesia.

There have been different ways of carrying out the weaving process. They keep improving as time progresses.

There are two ways to making Tenun, such as:

Traditional techniques of making tenun requires a human with the skill for it. Generally, there are two traditional ways of weaving the tenun fabric:

The hands move in an up and down motion so the threads interlace with each other. Besides using the frame for the threads, the worker has another device on his or her back.

In a way, it imitates the act of carrying something behind your back (gendong) which contributes to the name of the technique. However, this is a very ancient process of tenun and only a handful of people still uses it. It is not very practical since it takes a very long time to produce a fabric.

There is no need for an additional device since there are extended woods at the bottom of the frame. This technique earned its name from the usage of the feet as they press on the woods. The name for that action is “injak” in bahasa Indonesia.

Due to the size of the wooden frame, workers no longer have to place it on their laps. They sit on a chair and skilfully use their hands and feet to create motions. This device is still widely used by people in different parts of Indonesia. They may also have other names for it. The fabric made from this device is highly appreciated since it takes a skilful human to produce it.

The most modern way of making tenun is by using a machine. Instead of having workers making the fabric, there are machine operators keeping an eye on the tenun machines to prevent any malfunctions on the threads.

Improper weaving of the threads could increase the chance of damage on the fabric. The job of the operator is to make sure that the threads will not snap during the process since they could leave an undesired pattern on the fabric which end up ruining it. This weaving machine is very common since it creates fabric at a fast rate unlike the traditional ones which are more time consuming.

Different Kinds of Tenun in Indonesia

The devices and techniques used in weaving threads are not the only things which make tenun an art. The patterns and colours of the fabrics are also crucial parts of tenun. In fact, they help people to recognize which part of Indonesia the fabric is from. As mentioned before, they also reflect the beliefs and the cultures of a society. Since each region has its own specific pattern of tenun, the following are some that are worth knowing. 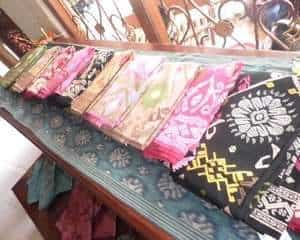 The name of a very famous tenun fabric from Bali made specially using traditional means is Grinsing. It takes two to five years to make this fabric. The price is also very expensive ranging from one million up to five millions rupiah.

The fabric comes from a village in Bali named Tenganan. The colours used in the fabric are called “tridatu” which means “three”. The three dominant colours are red, black and yellow.

The inspirations for some of the patterns are from the shape of scorpions and frangipani flowers.For ceremonial reasons such as a wedding, grinsing fabric is a must.

Reportedly, the fabrics used during the special occasions are aged hundreds of years. It is believed to hold a special power because the fabric can dispel any misfortunes or ill intentions. Bad spirits will not be able to cause any harm in the prescence of Gringsing.

Originated from the Buton tribe in an island in Southeast Sulawesi, the tenun fabric comes in striking colours of red, orange, blue or green. The patterns tend to reflect the state of nature around the island. 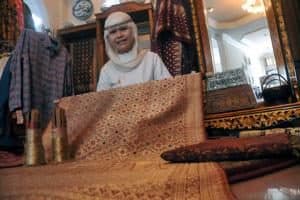 One of them is called Betano Walona Koncuapa which is supposed to show the soft grey ashes which are blown in the wind during the burning of a field in preparation of farming. Buton tenun plays a role in connecting the people within the society.

It can also play a part in showing identites and social status since aristocrats wear a Buton tenun that is dominant in the colour grey. People wears the Buton tenun when they perform a ritual. 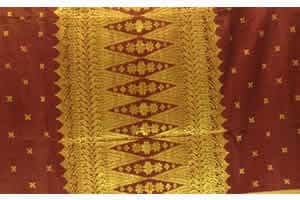 The name Sambas comes from the region where the tenun fabric is made. What makes this particular fabric so special lies in one of their materials: gold thread.

Sambas tenun is often used during a wedding and other important rituals especially the ones that involve the nobles. The patterns include animals and flowers. One of the most well known one is in the form of bamboo shoots.

The peak of the bamboo shoot takes a triangular shape. It reminds the people to always grow, to find the right path in order to reach the top and once they reach the top, they should always try their best not to be arrogant. Sambas fabrics are expensive due to the lack of skilled workers. This skill is usually passed down from the elder generations to the younger ones. They can also take a month to produce which also contributes to the price. 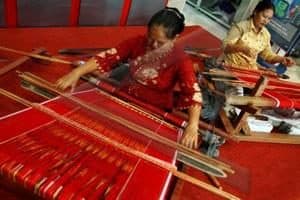 This tenun fabric is still tradionally produced by the women in the Samosir Island region. Red, black and white are common colours on the fabric.

Gold and silver threads can be additional materials if needed. Surrounded by the Toba lake, nature becomes the main inspiration such as the stars or the texture of dried woods.

The stars pattern, known as Ulos Bintang Maratur, is usually a gift to a woman who is 7 months into her pregnancy. It symbolizes a family living in harmony. 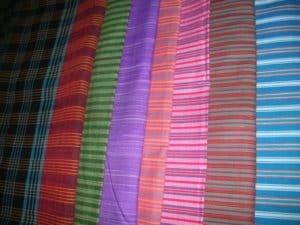 Lurik originates from the word “lorek” in Javanese which means lines. Another definition includes that the word “rik” means lines or trench that the people believe to be some sort of a gate or a protection to those who wears it. This particular fabric comes in different kinds of colours. They have repeated stripes or squares as patterns.

Back then, there were numerous amounts of patterns to make. However, some of the patterns are no longer available due to the lowering interests.

Lurik tenun depicts the value of modesty. This fabric has been around for a very long time. It begun as a simple fabric that had the purpose of helping people carry something. Once, the only people who wear it was the commoners but the royalties have also been seen to use it on different occasions.

Indeed, tenun is a work of art from the moment of weaving the threads until they become a fabric. The people who make it do so by using their hearts and values taken from the society they grew up in. Tenun embodies nature and shows it off through the people who wears it for different kinds of purposes. It comes from the locals and now begins to emerge as a valued heritage of Indonesia.