So, in the year of the rabbit and the eggs we once more celebrate the Easter. You already know the Easter,right? Maybe its the perfect time to enjoy some good things with family especially your children. So, beside its a religious time to pay respect to the Lord, its also a good time to relax a bit and having fun all day long with the entire family. However, some of you maybe still curious about what the Easter actually meaning. Therefore, the Easter is actually a celebrating day for the Lord that rose from the dead.

The christian believe that after the death came, He rose again to be the guide the people from falsehood. Now now, the Eater celebrating is maybe a bit different in some other regions. Maybe almost unnoticable. But, the important thing is almost the same. To stay together.

Yep, people are joining in a large group to “welcome” the arisal of Jesus with full happiness. Just like in other areas though, even in Indonesia, the chirstian people are also celebrating the Easter. Of course, with their own unique activities. So, what are those people doing when the Easter comes in Indonesia? 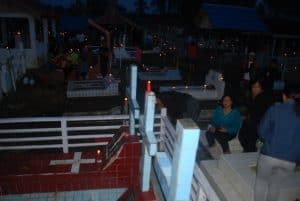 Like it said above, the actual meaning of the Easter is stay together. Staying together with family is the best one. Even though the dimension was separated, but the bond of family is staying forever in our heart. Just like in the Central Borneo, when the feels of togetherness so strong. Like the other christian families, they celebrate the Easter with coming to the nearest church. But in the day before that, they’re doing an unique activities.

Usually, they’re visiting the family’s tombs. To say “hello” to their dead families. Even though its really quiet in there, the people really enjoyed it. Some almost cried in happiness. The candles were applied to the tombs, making them more beautiful than ever. They who still lived, will accompany their dead relatives, always.

Just like the meaning of family, the Central Borneo’s people really understand it. They’re not leaving anyone behind, even the deads. As family, they will be strong together even though separated by life. Once a family, always a family. 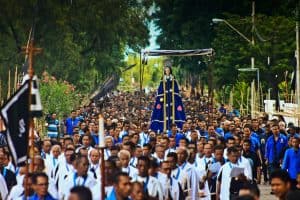 Yep, the people in East Flores is doing the exact same thing like other people do. Of course they visiting church, like always. But before doing it, they will carry the statue of Maria and Jesus through the town. They circling the town while doing it, then will finish at the church. The activity is full of antusiasm but still has the high religious value on it.

Actually, the Easter is celebrated in four days in Flores, not just once. It will start on The White Thursday or Indonesian called it as Kamis Putih then continue to the Easter day in Sunday. It’s rather fun to watch though, because they held several processions in those times. More over, the streets in East Flores decorated with some candles during the peak of the event, which is the Easter. In the peak of the event, they will do the “carry-ing” procession, Semena Santa.

So, maybe this is the best time in the Four day-Easter in East Flores, Remember, only can be found in Indonesia. 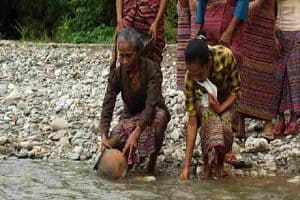 Even though is not known by many people in Indonesia, this special tradition in Noemuti is exist for several hundred years, and amazingly they still maintain it until now. No wonder, they still do this activity pretty well, even though the activity itself is already held starting from the ancestors in the past. Some of the christian youth still did it though, the old watch them with proud in their hearts.

Now, the tradition itself wasn’t originated from East Nusa Tenggara. Their ancestor brought them for Portuguese. As you can see, there’s the same procession can be found in there. So even though it came from Portuguese, the people in East Nusa Tenggara combined it with some of ancestral culture, like presenting foods, vegetables, and some money to the God. Its actually came from Animism, so maybe its a combination of (Animism)tradition and religion.

The Kure procession is pretty simple. The people will wash the statues of Jesus and Maria first, usually done by the village chiefs. Then after that, they’ll start to do the offering to Them. Finally the procession was closed by some prayer led by Village Chief and Pastor in there. They keep doing the tradition for hundreds of years, and never forget it. Never inclined and do what must to be done in the name of the Lord.

You may also read:

4. Celebrating Easter With The Theatrical “Way of Crucify” in Wonogiri 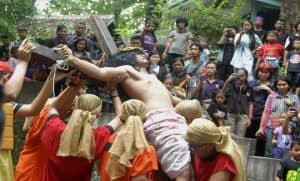 Actually, the theatrical itself is held in several areas in Indonesia, but the most famous one is on Wonogiri. Thousand of people “accompany” the way of crucify to celebrate the Easter day. Even though it looks painful, but hey its a theater, its just an act. Surprisingly, the actors are pretty good at doing their job the represent the characters.

The pain, the suffering can be shown with full expressions. Its just like, nothing behind it. Some people even cry in sadness looking at the crucified Jesus, because it looks so real. The real pain at least. Then after they arrived at church, they’re praying to the God for the good fortune.

5. Celebrating Easter in Kulon Progo By Visiting The Cave of Maria 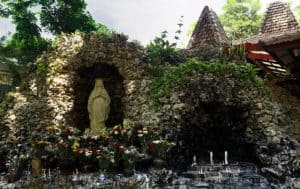 The Cave of Maria is a holy place, stands graciously in Kulon Progo, Yogyakarta. Many christians visiting here to ask forgiveness and praying for their life to the Mother Maria. Even though it looks simple, but its pretty deep. As you can see, the people praying here are doing their thing with much focus.

The feel is really quiet and peace. The candles always accompany Her. The people come and go everyday. And Maria still stands there with grace. She still welcomes you every time you come there, so be free to visit Her in your free schedule.

That’s it everybody, the five celebrations and traditions of Easter in Indonesia. Like we guess, some areas in Indonesia have several traditions to celebrate the coming of Easter day, with their own unique ways. They laugh, they’re having fun, they cried, they prayed in silent, you can feel them. You can see, how they love their God. You can see their love, their devotion, their feelings toward their Lord.

And even though they have several ways to celebrate it, they didn’t forget the true menaing of Easter. To stay together. In joy or sadness. In life or death. They have to be together, they should be together, as one family. As one family that will live in peace in this beautiful world. No matter what the big problem is, they will stand firmly. As one family.