Indonesia is one filthy rich country when it comes to its cultures. You can find various differences in our cultures, yet also find out that those differences are only makes us stronger. Yes, this is one aspects that we Indonesian are proud of : we are different, yet the same.

The cultural differences that we’re gonna talk about in this article is the mythology creatures ones. Yes, Indonesia is one traditionally bound country when it comes to its beliefs. From Sabang until Merauke (these two are the furthest city in Indonesia), you can find that Indonesia has various different beliefs when it comes to its mythology creatures. There are still many creatures that we belief exist, even up until now.

What are these creatures? Let’s just find out together. (Also read : largest ethnic group of Indonesia ) 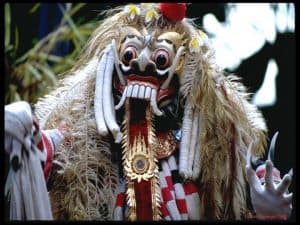 First Indonesian Mystical Creatures is Leak. Leak is a mythology creatures from one of the famous island in Indonesia, Bali. Bali is an island with very beautiful resources, as well as rich cultures.

The cultures are not manifesting only in traditional dance, music, or rituals. They also comes in different forms : stories. Yes, Bali has many traditional (and mystic) stories. Leak is one of them.

Leak is human who are wanting to be rich and cooperating with ‘bad’ creatures from other worlds. The famous one consist of two men and one woman. They are ordinary human in daytime, and becoming leak every night. This mystical creatures are manifest through human head with no body.

The intestines of the human is dangled from the head, without the body that covers it. The people of Bali believes that Leak will come every night to suck the blood out of children and pregnant women. They need that blood in order to increase their wealth.

This is almost the same with the creatures from Kalimantan that called ‘Kuyang’. If we want to kill Leak, we’re gonna have to stab the leak right from the bottom of the intestines and this will separate the intestines from the head. If they both are separated, the Leak will slowly die. (See also: Indonesian Beliefs and Values) 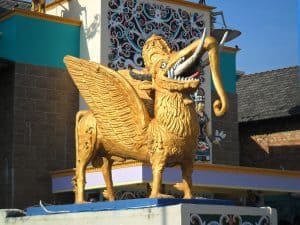 Got trunk but no elephant, got wings but no birds. This is the one : Lembuswana. Lembuswana is one mythology creatures from the old times, when Indonesia was still a part of a kingdom called Kutai kingdom. This has been a creature that is built inside the dome of the kingdom as it is having several history value for people.

Meanwhile, this creatures was the ruler of Mahakam river and people believe that the king of Kutai Kartanegara, Mulawarman, is using this creature for his spiritual vehicle. This creature is a symbol for dominance and sovereignty, as people like to called it. 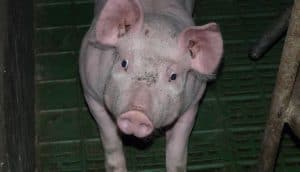 Babi ngepet is another legendary mystic creatures that stories came from the entire corner of this country. People believe that if you find this mystical creatures in the midnight, sniffing around your stuffs and taking it away from you without your agreement; this creature is not an ordinary pig. (see also: Diversity in Indonesia)

Babi ngepet is originally human that is having a dirty affair and using black magic to get power to steal money or stuffs from someone else. People believe that when the babi ngepet operates, there is another people on the other hand of the location that is waiting for this person to operate. (see also: Indonesian Beliefs and Values)

Then, this other person is helping the other person by keeping a magic candle so that the candle is not dying. When the candle dies, the babi ngepet came to its original form; which is human. This one mystical creature is actually pretty famous for the people in Indonesia. There has been various movie and TV series that came under its name. (Read also : Indonesia Lifestyle ) 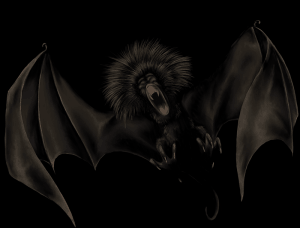 Another Indonesian Mystical Creatures is Ahool. Just like many other cryptics, there is no physical evidence that this particular mystical creatures exist.

However, the number of people that claims that they have seen this creature has been growing and growing throughout the entire country.

You can find that ahool is a large bat or a giant bat that has the wingspan of 3 meters. This is twice as big as the largest bat ever found in the history of human being; the flying fox.

Ahool is said to live in the middle of deep forest in Java island, Indonesia. The females like to live in group, while the males ones are living alone. They have huge wings, long snout and a long, thin crest and could make everyone jitters in fear.

Some people actually believe that ahool is not just a mystical creature; it is exist : in actuality, it is a giant bat or owl. (See also: Papua Culture ) 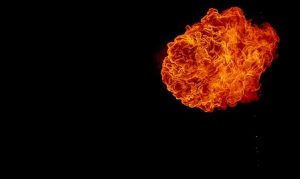 Banaspati is another urban legend that came from Java island. This particular creatures is actually dangerous, because it can hurt other people that come by it.

This is a fire creature that flying around in the middle of the night looking for someone to hurt. It has two legendary forms : just ordinary fire, flying around; or fire human. (See also: Reog Ponorogo Dance)

The first form might not look that scary. It only comes in the size of human fist.

However, if the witness is not decided to run while they are encountering this particular creatures, it can feed off of the human fear energy and makes the fire bigger and even majestic. This is of course dangerous because it can kill the human anytime. (see also: Indonesian Tribes)

It is said that banaspati is sucking the blood of its victim as forms of black magic. Another form of banaspati is fire-human, which is manifestation of another black magic human. They are said to be walking with hand in the land and feet above. (see also: Tana Toraja Death Rituals) 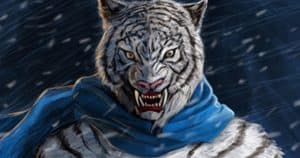 Cindaku is one urban legend from Kerinci city, Jambi province. Located in Sumatra island, Jambi is one of the area in Indonesia that has various interesting story; one of them is cindaku. (see also: Endangered Animals in Indonesia)

Cindaku is said to be half-human half-tiger supernatural power which let the people posses it to be able to transform into tiger forms. Originally, these people are the people that maintaining the good connection between tiger and human. By doing so, they hope that tiger and human can live harmoniously. (see also: Unique Facts about Indonesia)

However, as the days goes further, there is one side of the two (be it human or tiger) that is triggering the peaceful honor and this results in conflicts between human and tiger. There are many people that is eaten by tiger because of the violation of this treats, and vice versa. Having cindaku supernatural ability (can turn into tiger) is not always good. In actuality, it is  a controversy because there are several religion that forbid this ability and it is said that the people who posses this ability will have difficulty when they die. ( See also: Traditions in Bali ) 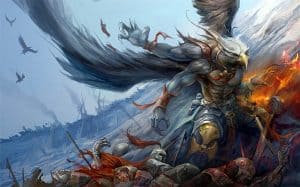 Last Indonesian Mystical Creatures is Garuda bird. the symbol of our country, Garuda bird is very famous and known to many of Indonesian people. However, there are not that many people that knows the history of this particular bird. Long, long time ago, when Buru island was still a country called Tifu land; there lived a majestic birds called Garuda. (see also: Flag of Indonesia)

Meanwhile, they are so big and having an extra strong power, making them able to kill anything that is one their way. They eat fishes and when the fishes are not enough to feed them, they will eat human.

They hunt human that is coming to Tifu land through ship, usually success because of their power. The human inside the whole ship will die in the bird’s hand. (See also: Bali Myna Bird)

One day, there is a ship that is known to have very brave ship crew. These are the crews that has fire spears before they come to Tifu land. They then stabbed the Garuda bird fearlessly with the fire spear, making the Garuda finally collapse and eventually die. The story of this bird was so famous until the early government of Indonesia was interested to take this particular bird to be the symbol of our country; particularly because this bird is so strong and majestic. Hopefully, this country will have that characteristic too.

As we can all see, Indonesia is one rich country when it comes to its cultural stories. Do you think these Indonesian Mystical creatures are interesting? Find out more about this interesting country throughout this site!