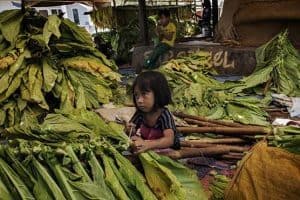 It is a morally wrong act to employ children because they are often underaged. Children labour strips off the very childhood experience that every child should have. However, due to children labour, they miss out on those experiences. They also lack the basic right of education because their working condition interferes with the opportunity to go to school. Instead of attending a class, the children have to go to work.

Indonesia is one of the countries where children labour is still very much alive. Whether people are consciously aware of it happening or not, many underaged children are still put to work under stressful conditions in Indonesia.

Children labour are often needed in a home-based business. Moreover, agriculture in Indonesia such as plantations and tobacco farms also employ children. Factories and mining industries also recruit children to do the dirty work for them. The work hours for these children could be brutal. There are situations where the children may be forced to work for around 12 hours a day with very little pay.

Main Cause of Children Labour in Indonesia is Poverty 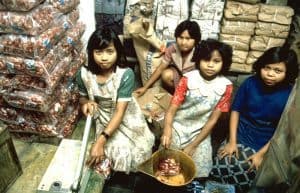 Children labour often occurs in countries where there is still a high number of poverty and low income rates. In Indonesia, the amount of children labour currently at work is estimated to be around 2.4 million. However, supposedly the number is actually higher than that.

The poverty that the people face especially leads to poor condition of economy in many families’ lives. Due to poverty, there is a lack of money. When a family lacks the money that they need then it becomes impossible for them to afford basic needs such as food and clothes. This forces every member of the family, both old and young, to go out into the world and find work. This is the only way that they can earn money to keep themselves alive.

Many of the parents may feel wrong to force their children to work but they need money to fulfil their basic needs. The local and international industries will see this as an opportunity to take the children into their work environment. They will begin to inhumanely treat the children to work for as long as they can. The children will get a small, unfair payment in return of their hard work.

Choosing Between School or Work 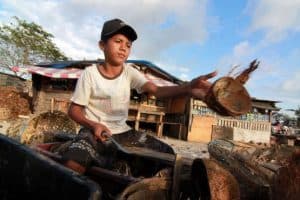 As what had been said before, poverty does cause the major enforcement of children labour in Indonesia. What’s more unfortunate is the loss of opportunity of having an education. Indeed, education is a right to every children in the country. However, without money then there is no way for the children to be able to afford school.

The amount of school fees may already been lowered within the past years. But there are still some amount of money that parents have to spend. The additional money that is needed to be spent is usually for school’s shoes, uniforms, textbooks as well as for transportation. The parents who are living in poverty don’t have that money. Thus, their children cannot go to school.

Some of the children who are under children labour may prefer school than work. But school is not an option. The children become the backbone of the family so they have to forget about school. Some of the children are even orphans. Without anyone else paying attention to them, they need to be able to feed themselves. Some children may even find it hard to adjust into the systematic and structured school environment. They may already feel that they cannot follow through the amount of discipline needed for school because they are already so used to working.

Most of the work environments that the children have to endure are not friendly. Since they are still children, some may have the fear of speaking out against the danger they face. So they stayed quiet about it and suffer silently. But that does not mean the unfair treatments should be dismissed. Below are some of the danger that the children labour faces in Indonesia.

Unfortunate children may have to endure extreme forms of abuse. Take the case of a fishing environment in North Sumatra as an example. The children who work there are forced to stay around for 3 months. The children are not given proper meal. Other than that, some of the children also receive all sorts of abuse. These abuse include physical, verbal and sexual abuse from the people who are working alongside with them.

The worst threat that the children have to go through in their work environment is the high chance of being killed. There have been many reports where the children are dead due to drowning. Many of the children labour do not have the life saving skill of swimming to save themselves.

Reportedly, children work for very long hours. On average, they may be forced to work around 14 or even 18 hours in total. This actually has a dangerous impact on the children’s physical as well as mental health. Since the children are not receiving the normal hours of work, their hours needed for sleeping are also cut down. According to studies that have been conducted, children who are still around 13 to 18 years old need an adequate amount of sleep. Those children should be getting at least 8.5 hours of sleep. Working at abnormal amount of hours would, of course, make it impossible for the children to sleep properly.

Lack of sleep during their crucial state of growing will have negative effects. The children will experiencer early aging and also stunted growth. There have been many reports of children working in shoes factories looking older than their actual age. The obscene amount of hours the industries force on these children are taking a toll on their health.

3. Unfair Payment by the Industries

The Industries fully exploit children workers in many ways. But one of the most unfair exploitation of these children is through their payments. It is true that children work under heavy and long hours every single day of their lives. For all those hours they sacrificed, the industries only pay them back so little. Many of the children labour in Indonesia only earn around Rp. 75.000 for a week. That amount could be converted as to only $6 dollars a week, an average of 8.5 hours per day.

What is more saddening is the fact that there are even children working for longer hours than that and receiving even more less money. There some children who work on an average of 10.5 hours a day. When the week ends, they only receive around Rp. 36.000 in total. That amount of money is around $3. The payment is unfair but there is not a lot that can be done. The children usually do not complain about this. They receive whatever amount of money is offered to them. The children don’t argue and the industries love this because the children are always willing to work for less and say nothing.

There have been numerous efforts by local and international organisations to end children labour in Indonesia. One of the programs that is still actively trying to end this is the International Programme for the Elimination of Child Labour (IPEC). There is a slight decrease of Indonesia’s children labour in recent years. However, that does not guarantee the fact that there are still many children working under secretive condition. What is needed to end children labour is stricter laws on industries so they can no longer employ children. Another thing that can help is giving more education opportunity to poor families. They will have a higher chance of a better future and bigger chance to pull the families out of poverty.

Vulnerable children who are underaged should never have to work in extreme work conditions. Children in Indonesia should be given the childhood and the education they truly deserve.

8 Crucial Things Not to Bring in Indonesia