Indonesia is not only famous for its stunning natural charms. In addition to the stunning natural beauty, the country also has many unique and interesting cultures and customs. In fact, every tribe that exists in each region in the archipelago has different cultural uniqueness. Thus, the variety of cultures and customs make Indonesia much more famous in the eyes of the world and gives its own distinctive pride. 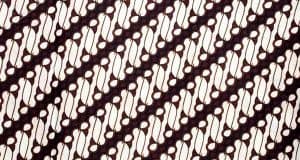 Batik Indonesia, including its culture, technique, and development of motive and technology, has been declared as Humanitarian Heritage Culture by UNESCO on October 2, 2009. Since then, on every October 2nd, Indonesia always commemorate National Batik Day.

Initially, batik was first introduced to the world by former President of Indonesia, Soeharto, who was wearing batik at the UN Conference. Batik itself is identified as a cloth made by using the motifs process through traditional staining techniques. 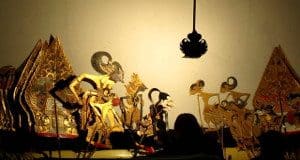 The original performing arts of Wayang from Indonesia that flourished on the island of Java and Bali has been known since hundreds of years ago. In its development, there are several types of puppets, such as Wayang Kulit, Wayang Golek, to Wayang Orang, with a story that is growing as well.

On November 7, 2003, UNESCO also acknowledged wayang as one of Indonesia’s cultural art. Until now, puppet shows can still be witnessed. 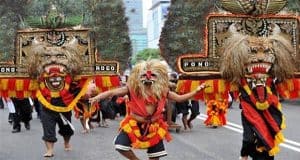 Reog is a show that originated from the northwest part of East Java, and Ponorogo City is considered the real Reog hometown. As the Ponorogo City Gate is decorated by the figure of Warok and Gemblak, two figures who participated when the show Reog is performed.

Reog is one of the cultures in Indonesia that is still thick with mystical things. Modern Reogs are usually featured in several events such as weddings, circumcisions, and national holidays. 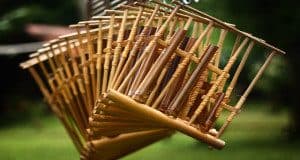 Angklung is a double-pitched musical instrument that has traditionally grown in society. Angklung is known as a musical instrument typical of West Java. Using the basic materials of bamboo, angklung is played in a vibrant way so that the collision between the bamboo pipe and the pole will produce a certain sound. In addition, in case you need information about angklung, you can see Indonesian Angklung Facts.

There is 2 barrel (pitch tone) in angklung, namely slendro barrel, and pelog. In addition, Angklung is also known to the public as an inspiration of the people’s spirit when fighting during the independence war in the country. 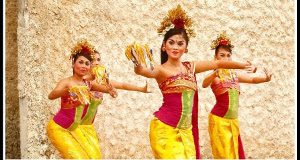 This sacred nuance dance has now developed as a “welcome” dance, created by one Balinese artist named I Wayan Rindi. If in ancient times the dance that originated from the Island of the Gods is done in the worshipping ceremony in the Hindu temple house.

Meanwhile, nowadays, Pendet Dance can be danced as an offering for the guests in the events of Indonesian culture performance and ability to attract many tourists viewing the art performance there. 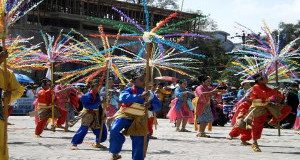 Dugderan is a festival to mark the commencement of fasting in Ramadan held in Semarang City. The celebration that has been started since the colonial period is centered in the Simpang Lima area.

The celebration was opened by the mayor and enlivened by a number of firecrackers and fireworks.  At this celebration, a variety of goods are sold and are often included various sponsors from a number of large industries. Dugderan performance is intended as a means of entertainment as well as a means of Islamic Preaching. 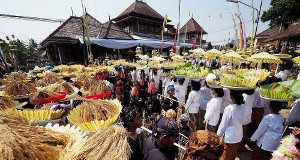 The term Seren Taun is derived from the word in Sundanese Seren which means offering and Taun meaning year. Seren Taun is a traditional Sundanese rice harvest ceremony conducted every year.

The ceremony took place solemnly and vibrantly in various Sundanese traditional villages. The traditional ceremony as a thanksgiving for agrarian society is enlivened by thousands of surrounding communities attending the event, even from several areas in West Java and abroad. 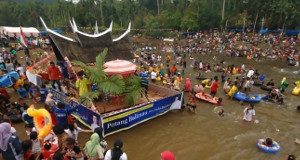 Balimau is a tradition of bathing using lime that develops among the Minangkabau community and is usually done in certain areas that have river streams. Inherited from generation to generation, this tradition is believed to have lasted for centuries.

The purpose of Balimau is to clean oneself outwardly and inwardly before entering the month of Ramadan, in accordance with the teachings of Islam, that is to purify oneself before doing the fast 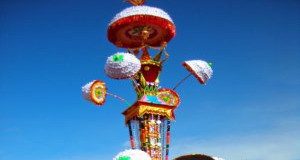 This unique culture is organized by the people of Minangkabau, West Sumatra. Aiming to commemorate Asyura, the death of Imam Husayn that the a grandson of Prophet Muhammad SAW. Usually commemorated on the 10th of Muharram on the annual calendar. Tabuik word is taken from Arabic with the word “ark” means wooden casket.

Based on legend, there appears the appearance of a horse-shaped beast like pegasus but a head-shaped human head. This ritual has been in existence since 1826 – 1828 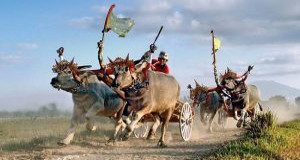 Makepung means the Racing of Buffalo, this tradition is done only by the Balinese people. According to the Balinese religious perception, animals, such as buffalo are considered sacred animals in their religion.

Initially, this tradition was done only to plow their paddy fields, but over time, this tradition is becoming popular in demand and even become one of the traditions that attract many foreign tourists. Thus the event is now considered to be an annual tradition in Bali to increase tourism there 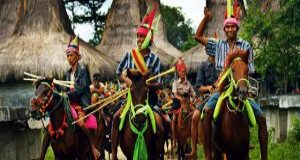 Pasola means the wooden javelin used to throw. Pasola means throwing a javelin wood while spurring a horse. This tradition is done by the people of Sumba, NTT. usually held once every year precisely in February.

Pasola is like a war game, depicting as a form of sorrow for someone who has lost his wife. The spear that was used is in the form of blunt points, though not infrequently this ceremony takes some casualt but it’s believed that the blood of the victims can fertilize the soil 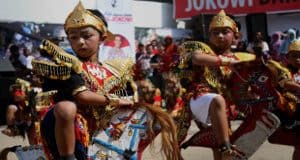 The lumping horse dance is also called Jatilan and it is a traditional Javanese dance featuring a group of warriors riding a mock horse while dancing to a song being played.

Furthermore, this dance uses horses made of bamboo or other materials that are woven and are cut from a solid fabric resembling a horse shape. And also decorated with artificial hair from a plastic strap and tied together to resemble a braid just like a horse has. 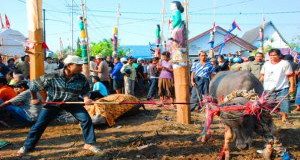 This unique culture is called Tiwah Ritual, a kind of ceremony to deliver the bones of the deceased to its final resting place, in the hope that the one who is beloved can reach heaven.

On the other hand, this ritual is done by the Dayak tribe of Central Kalimantan, especially those who embrace the religion of Kaharingan. For the Dayak community, Tiwah rituals are considered sacred rituals but over time Tiwah Tradition has shifted away due to high cost in performance. 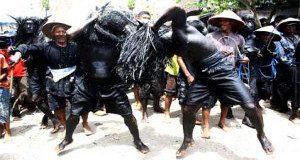 As the name implies, this ritual usually dresses people into a Cow. The majority who participate must be men, but that does not mean women just sit still and watch, usually, the women have the task to prepare food and other offerings necessary for the success of the events. 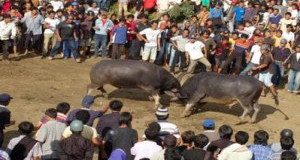 As the community will show its honor to the ancestors by buying Buffalos to fight in the event. Hence, the type of buffalos fighting there is pretty expensive. 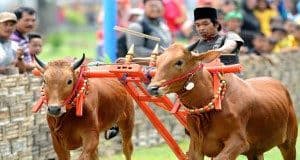 Karapan Cow is a culture that has become a tradition to raise one’s social status. Karapan Cow is a term for the races of cow originating from the island of Madura, East Java.

In this race, a pair of cows that pull a kind of wooden train where the jockey stands and control the pair of cows. Then, its driven in a fast race against another couple of cows having the same condition. The track is usually about 100 meters and the race can take about ten seconds to a minute to finish. 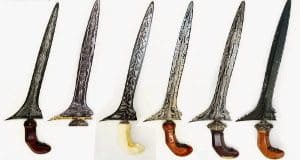 Keris is an original Indonesian traditional weapon believed to contain supernatural powers. The kings of the archipelago in ancient times made the kris as an heirloom weapon. Keris has been used since the 9th century and is made by craftsmen called Mpu.

The blades on the keris are made of a mixture of several metals, while the handle is made of bone, horn, or wood. The researchers had mentioned that the ancient kris contained titanium, a material newly used in the 20th century as a space shuttle coating. Usually when people doing Indonesian Martial Arts, most of Indonesian using this traditional weapon. 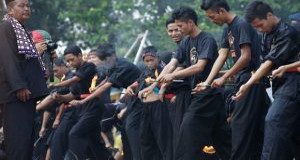 Debus is one of the martial arts originated from Banten, this martial action is believed to have existed since the 16th century, but at that time Debus is an art of combination of sound and dance. This attraction began to flourish in the 18th century.

The game show was very diverse, by starting the activity with piercing the stomach with sharp objects, slicing the body with a knife, piercing the tongue, burning themselves with fire, and others. Debus is identical with the science of body immunity against sharp objects 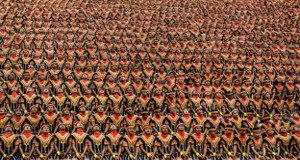 Saman Dance has succeeded in becoming an icon of pride of the province of Aceh Special Region. The dance has been famous worldwide because it is also supported by the decision of UNESCO which declared Saman Dance as a cultural heritage.

The dance from Gayo Aceh Tenggara tribe is often displayed on festivals and art performances around the world. Saman Dance is usually shown to celebrate important custom events and the poem used in Saman Dance uses Arabic and Gayo languages. 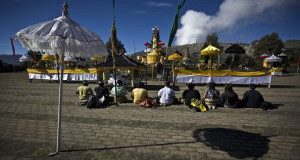 Kasada is a ritual performed by the people of Bromo, which took place on the 14th day of the month of Kasada. The ceremony is in the form of worship offerings to Sang Hyang Widhi as a form of gratitude for health and abundant crops.

Its history, supposedly said there are a couple who are not gifted by children, until one day they are meditating on Sang Hyang Widhi, and instantly heard the whispering voice saying Gods will grant their request of having offspring with the condition that the youngest child should be sacrificed to the crater of Mount Bromo.

The cultural activities in Indonesia need to be preserved so as to make distinctive identity towards Indonesia people and also to celebrate our native roots in order to make it famous for other people who come here.