15 Most Beautiful Temples in Indonesia

Yes, Indonesia is indeed full of beautiful things to be seen. The examples are the attractions, the beautiful spots like waterfalls and many others. But don’t forget, there are some temples here that also worth mentioning, like the famous Borobudur and Prambanan temple for example. There are many others waiting, don’t worry.

A little bit trivia here, there’s two kinds of temple in Indonesia, mainly the Buddha and Hindhu temple. They all spread across the land of Indonesia, you can find them almost in every province. To  know better about them, let’s see those temples that included in the 15 beautiful temples in Indonesia. Here we go ! 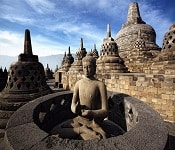 First thing first, we go to the biggest Buddha Temple in Indonesia called Borobudur Temple. Of your you knew it already, because it’s one of the seven wonders in the world. Even though its age reaches hundred years old, it still looks very good til this time.

For you who don’t know, this temple was built in the year of 800 during the Syailendra dynasty, one of the great dynasties during those times. Also if you really curious about it, you can hop on a  ride to the Magelang city in Central Java. It’ll be fun. 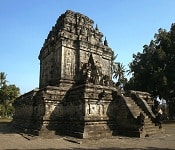 Next one is Mendut Temple. This temple is also included as Buddha temple. It looks so much simple than that Borbudur Temple, there’s only one solid temple in this temple complex. The buildings and all the architecture design is clearly visible and none of them damaged.

That’s a good thing though for you who want to see directly the relics and study the artchitecture on the spot. All of the designs are still have the beautiful looking and also worth some pictures. Taking a little selfies in this temples wouldn’t be a bad idea. It’s located on the city of Magelang. 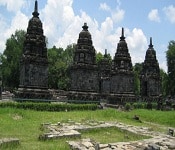 This Lumbung Temples is a Buddha Temple, but included in the Prambanan temple complex, which is Hinddhu Temple. Because having the same complex with the Prambanan Temple, it located in the same area in the Sleman, Yogyakarta.

The main things to see are the 16 small temples that available in there. It’s amazing to see those temples are still in a good condition even going through so many years. If you wan to see,now it’s the perfect time to witness the great Lumbung Temple. 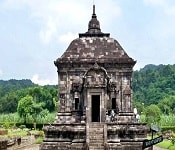 We’re going to the next Buddha Temple called Banyunibo Temple.  Banyunibo in Javanese means the falling water (falling = nibo, banyu = water). It’s located on the city of Yogyakarta, and next to the other temple called Ratuboko Temple.

This temples still looks firm and steady. You can see how strong the walls are. All the reliefs in there are worth looking with some interesting stories behind them. This temple of the Great Ancient Mataram Kingdom is of course worth noticing. 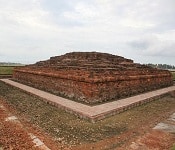 Batujaya Temple is the next Buddha temple we’re into. This temple was a big temple complex with such a beautiful architecture, but now it’s a temple remains that you can see only its foot. But even though it’s only a remain o a great heritage, this temple contains a lot of histories.

Located on the the West Java province, in the area of Karawang, some kilometers from the city of Bekasi. Some say that there are some temples beneath the small hills in there. But until now, there’s not a single person trying to dig them, the reason is to respect the temples and only enjoy them in the way they’re having now, a historical remains. 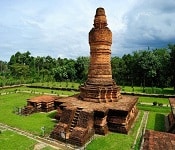 Fat from the area of West Java, we’re going to Riau to find the enxt beautiful temple in Indonesia called Muara Takus Temple. Some of you may heard the name of this tempele alreday, especially in the history books you learned in school.

Well, this temple is also a really good choice to spend your holiday in Riau. It has a beautiful building of tower-like temple, that you can’t find anywhere else. You can go to the Pekanbaru City to see this Muara Takus Temple. 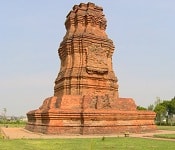 The next Buddha temple on our list if the Brahu Temple. It’s a simple one, mainly build with the red bricks. After going through many years, it still looks great. You can se the building itself, and noticing that there’s no big damage can be found in this temple.

This temple was a great place though. It’s used as crematorium for the Kings of Brawijaya Kindoms. They did a special ritual or special ceremony in here to burn the body fof the dead Brawijaya Kings. But sadly, the researchers couldn’t find a single ash of the Kings. 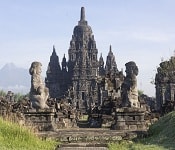 In the eight place we have this Sewu Temple. This one is also included as one of the BuddhaEmples in Indonesia. In Javanese, the word “Sewu” means thousands. So from theyou canxpect that this temple complex is filled with so many small temples.

This Sewu Temples is also located near Prambanan Temple complex,just few hundred meters from it. You can see the two big guardian statues greeing you there, all the temple complex remains, and also the temple itself located in the end of the path. 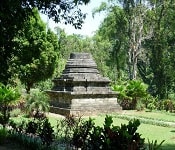 Next one is Sumberawan Temple. This one s s very famous of its surrounding, which is the green envronment that always so refreshing for visitors there. You can’t see the full architecture of it thou, because it was destroyed long time ago.

The thing you can only see is the stupa part of it. So you just see he half body of it though. But even though only half it, it’s also worth visiting not because of the temple itself only, but also the beaiful view around is enjoyable. 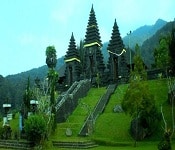 Starting from the 10th temple to the last temple, we’re going to tell you about the beautiful Hindhu Temples in Indonesia. So we only included 6 of the for you. Starting from this temple called Gunung Sari. Like its name “Gunung”, which means mountain in Bahasa Indonesia, the temple itself is surrounded by the wonderful mountains.

Thanks to that, the air in there is very fresh . The panorama around is also realy great to see. But the main point here is also the temple itself. You can visit this well structured temple in the city of Magelang, Central Java. 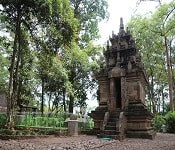 Even though it looks so lonely, it has so many “friends” from the surrounding, like the majestic trees ad some animals behind them. It’s refurbished in the year of 1978 and still looks great until now. You should visit this one too! 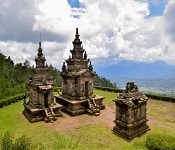 Next, is the temple of Gedong Songo. Just like the Gunung Sari Temple hat located in the mountain area, this Gedong Songois also located far above the ground, in the city of Semarang, Central Java. In this temple you can find about 5 little temples that still looks so well.

The air in here is pretty cold though, be sure to get some jacket before going on. This Gegond Songotemple was found by Raffles in 1804. It also believed to be built in the year of 927 during eh Syailendra dynasty. 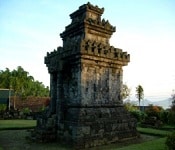 Pringapus Temple is placed in the 13 position. This temples is located in the area with the same name, Pringapus, Temanggung. This temples is very unique, here’s why. Around the temple, you can see some statues that resembling the God Siwa.

Also, it’s believed that temple is also a resemblence of the great Mahamaeru Mountain. There’s belief that Mahameru Mountain is the place where the Gods rest and live. They concluded this base on the reliefs and decorations that told that story very well. 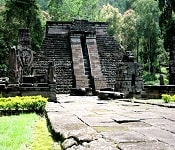 Here’s also one of the unique temples in Indonesia. Maybe some of wonder, the structure of this temple is somewhat familiar. Yep, you can see almost the same building in Maya tribe, with their own stairs temple.

You can find one that has the simalirit in the terms of stairs and temple, in this beautiful Sukuh Temple. You can find this Hindhu Temple in the area of Surakarta, Central Java. You can alsee the imageries and objects that resemble Sex in this temple. Even though it’s a bit controversy, it’s also worth at least a visit. 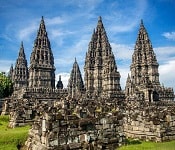 In the last place, we put another famous temple called Prambanan Temple. This temple is so thick with its legend of Roro Jonggrang. The thing is, you can see the evidences of that very story in this temple direcly.

This Prambanan Temple os actually the biggest Hindhu Temple in South East Asia. No wonder, there aso many tourists visiting this place, either the domestic or the foreign ones. Mostly the tourists are taking some pictures with it, but some of them are really focus on praying. This one is indeed a must visit temple.

So those are the exotic temples you can find in Indonesia. To get the maximum experience, you should make some efforts to visit them all, while having a nice holiday in this beloved country. The temples are waiting for you, better not be late!

15 Delicious Things to Eat in Bali