The entry of Hinduism and Buddhism to Indonesia brings many positive impacts. In addition to the disappearance of animism and dynamism that has been practiced by ancient Indonesian society, the system of the teachings of these two religions provides guidance in the life of the kingdom in its context. Hinduism and Buddhism were brought from India that developed around 1500 BC. There are many hypotheses about how Hindus and Buddhas are able to enter Indonesia. One of the most powerful is the waisya hypothesis.

In Sanskrit terms, waisya is an ordinary caste consisting of merchants and middle-class workers. People with this waisya caste are most likely to spread these two religions when they trade in the Indonesian territory. In effect, many of these devotees build many temples across Indonesia that we’ll list below. 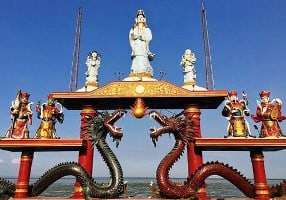 There is a unique and interesting temple beyond your imagination in a big city like Surabaya. This temple is located inside the complex of Kenjeran Beach area of Surabaya. Opened in 1999, this unique temple in Indonesia was built as a place of worship of Tridharma people who also included Buddhists.

The distinctive feature that you can see from this temple is a statue of the 20-meter-tall Dewi Kwan Im built on the seashore. This pagoda is made as an offering to Nan Hai Guan Shi Yin Pu Sa or Bodhisatwa Kwan Im South Sea. The statue of Dewi Kwan I mini was built after an employee at Sanggar Agung saw a white-robed woman walking on the water just before she closed the temple at night.

In addition to the statue of Dewi Kwan Im, in this temple, there is also a giant Phra Phrom statue that is gold plated. 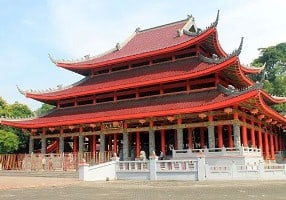 Sam Poo Kong Pagoda is a former stopover of Admiral Zheng He or commonly known as Admiral Cheng Ho. This location is also known as the Stone House Pagoda because there was once a large stone cave located on a rock hill. Almost all buildings in this location are red. Better still if you visit this place during the Lunar New Year then there is a celebration filled with the procession, bazaar, and also the Barongsai that will enliven this place.

Nowadays, this location is used as a place of remembrance and place of worship by the pilgrims. For pilgrims, there is the main building of stone cave where there are an altar and statues of Sam Poo Tay Djien to worship Admiral Cheng Ho. Although Admiral Cheng Ho is a Muslim, many adherents of Confucians worship him because according to their religious teachings the dead spirit can still provide help. 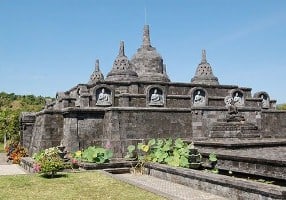 This temple is the only Buddhist temple among the many Hindu temples in the Buleleng area. It is the monk Girirakhito Mahatera who founded this temple as well as becoming the first monk in this temple. This temple building stands in a hilly area and faces the sea. Located in Banjar Tegeha Village, 18 kilometers from Singaraja, The North Bali Sea view will be very visible in this temple area.

Then, for you who want to get the cool and calm atmosphere, this temple seems to be suitable for you. Because the location of the temple that stood on the hill make the atmosphere more quiet and safe. Not infrequently many who visit this place tried to learn meditation.

On the other hand, anyone from any religion is allowed to meditate here and what’s unique in this location of this temple is there a big bell placed there which come from a donation from the country of Thailand. In addition, there are also many panels that tell the story of Buddhist journey and replica of Borobudur temple. 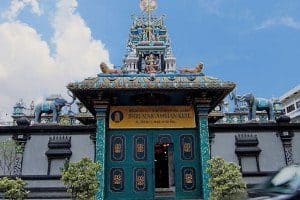 In Medan, there is a built Hindu temple named Shri Mariamman Temple. The temple was built in 1881 to worship Dewi Mariamman. Located in an area in Medan known as Kampung Keling, this temple was renovated twice in 1950 and 1989.

From the outside, this unique temple in Indonesia is decorated with a gopuram, a sort of multilevel Tower commonly found at the gates of Hindu temples from South India. Most likely gopuram is the beginning of the name of the gate that is often a gate in many areas of Java. This temple will be very crowded by many Hindus when they held festivals of Deepawali and Thaipusam. 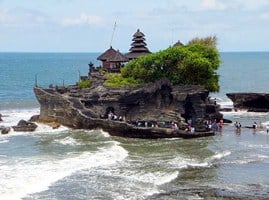 This temple is also one of the must-visit places for tourists visiting Bali. Pura Tanah Lot has been a part of mythology for centuries. Tanah Lot Temple also becoming one of the seven temples or shrines that form a chain along the west coast of Bali. 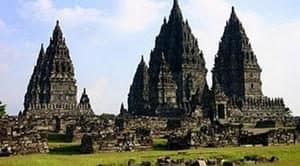 Prambanan temple is the largest and most beautiful Hindu temple complex in Indonesia. Located about 18 km east of Yogyakarta. Prambanan temple has three main temples dedicated to Lord Vishnu, Brahma, and Shiva and was built around the year 850 by the Ancient Mataram Kingdom. 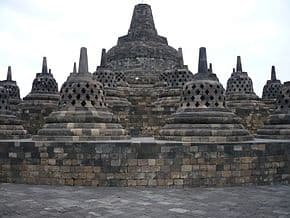 Borobudur is a Buddhist temple located in Borobudur, Magelang, Central Java, Indonesia. Location of the temple is approximately 100 km to the southwest of Semarang, 86 km west of Surakarta, and 40 km to the northwest of Yogyakarta. According to historical evidence, Borobudur was abandoned in the 14th century as the influence of Hindu and Buddhist kingdoms on Java waning and the increasing influx of Islamic influence there at the time

Borobudur is still used as a place of religious pilgrimage. Every year Buddhists who come from all over Indonesia and abroad gather in Borobudur to commemorate the Vesak Trisuci. In the world of tourism, Borobudur is the single most visited tourist attraction in Indonesia

Mendut Temple was founded during the reign of King Indra of the dynasty Syailendra. In the inscription Karangtengah that dated 824 AD, it was mentioned that the king Indra has built a sacred building called wenuwana which means bamboo forest. This temple was first rediscovered in 1836, during which all Mendut temple buildings found, except the roof. In 1897-1904, the Dutch East Indies government undertook the first restoration efforts with satisfactory results, although still far from perfect. The legs and body of the temple have been successfully reconstructed.

The building material of the temple is actually a brick that is covered with natural stone. The building is located on a high basement, so it looks more graceful and sturdy. 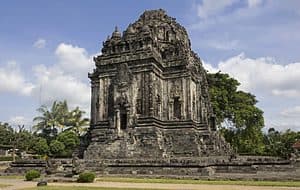 Kalasan Temple or Kalibening Temple is a temple categorized as Buddhist temple located in Kalasan village, Sleman district, Yogyakarta province, Indonesia. This temple has 52 stupas and is located on the side of the highway between Yogyakarta and Solo and about 2 km from Prambanan temple. In addition to the Kalasan temple and other supporting buildings, there are also three small temples outside the main temple building, in the shape of a stupa.

When the temple is seen from within, this temple is composed of a pile of interrelated stones and widened downward. Although this temple has been restored in 1927 and in 1929, people will still find it difficult to see the beauty of this Kalasan temple. That’s because there are parts that can’t be restored as original because many of the original rocks are missing. 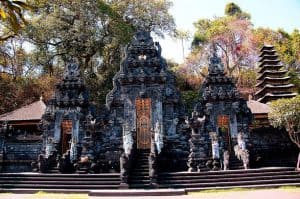 Temple in Bali is diverse, one of which is Temple Goa Lawah which attracts many domestic and international tourists. In addition to the holy temple, this one has a legendary story. Local people believe this temple hides the flow of rivers that can cure diseases.

In addition to having hundreds of bats that inhabit this cave, it turns out that many believe in the cave lay a tunnel that became home to the king of snakes who wear a crown on his head. Indeed no one can explore the contents of this cave so that the mystical thing in the cave just become a myth.

As we have seen, even though the majority of Indonesians are Muslim, there are 5 recognized religions in our country, including Hinduism and Buddhism. The beauty of Indonesia is not only natural or cultural but also the tolerance of its people. The spread of Hinduism and Buddhism in Indonesia makes the existence of some beautiful temples. Not only intended for devotees who want to worship, but it turns out to be the uniqueness of making these temples opened as tourist attractions that make many people want to visit.

Therefore, here all about 10 Oldest temple in Indonesia which is still exist. It used for Hinduism and Buddhism religion in Indonesia for praying. Moreover, it shows how much Indonesia become one of diversity country.

Top 9 Best Nightlife in Indonesia (#6 is Amaze you)