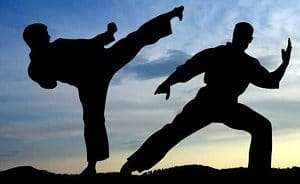 Pencak Silat, also known as Silat, is traditional martial art that originated from Indonesia. The mother of all Pencak Silat organization across Indonesia is Ikatan Pencak Silat Indonesia (IPSI).

Pencak Silat has such a big impact to the world. Not only Indonesia, Pencak Silat has spreads far to Malaysia, Brunei, Vietnam, Singapore, the southern Philippines, and Thailand for the past few years.

The international organization of martial arts federations were named, Persekutuan Pencak Silat Antara Bangsa (Persilat). Persilat was established in March 11, 1980 on the initiative of Eddie M. Nalapraya from Indonesia, IPSI chairman at that time.

By taking example of wild animals move, such as monkey, tiger, snake, hawk and many more, Pencak Silat as we know today is born. There is also another assumption that Pencak Silat came from the great skills of Indonesian native tribes in hunting and war. Cina and India are also bring influence of martial arts to Pencak Silat. 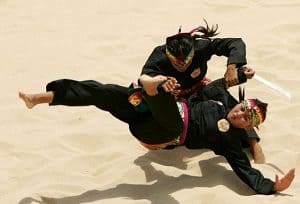 Pencak Silat is believed to start spreading around the 7th century AD but no one know for sure. It was assumed that Pencak Silat spread from Sumatra to various regions of Southeast Asia seacoast.

The spreading of Silat itself is just like any other kind of education. It was passed down from a teacher to a student. Although, at the very first time, it’s only simply from mouth to mouth.

The famous ancient kingdom of Indonesia such as the Kingdom of Sriwijaya and the Kingdom of Majapahit are told to have their own powerful warriors. These warriors have a very great skill in using the movement of martial arts.

Silat is more known as gayong and cekak Malaysia and Singapura. In Thailand, silat is known as bersilat, meanwhile it is known as pasilat in the southern Philippines.

Almost every region have their own martial arts character or warrior that they proud of. From Sunda Pajajaran, there is Prabu Siliwangi, as well as, Hang Tuah, the commander from Malacca. Gajah Mada, the Mahapatih from Majapahit kingdom and Si Pitung from Betawi are also the most well-known martial arts warrior in the history and legend. In the 11th century, there is a legend of Minangkabau, a practiced Silat, which in Minangkabau language called Silek, by Datuk Suri Diraja of Pariangan, Tanah Datar, which later being developed by the Minang people throughout Southeast Asia.

In the 14th century, the propagators of Islam contributed in spreading Silat across the country by teaching Silat along with the religion subject in surau or pesantren. Silat has become a part of the daily spiritual practice.

There are few terms applied in Pencak Silat, such as:

There are few aspects in Pencak Silat, such as:

Like in any other form of martial arts in the world, Pencak Silat also has its own level of proficiency, such as:

There are several rules that must be considered and do when practicing martial arts, such as:

There are few weapons use in Pencak Silat, such as: 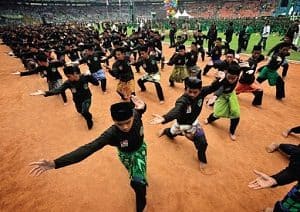 Padepokan is a complex of residential with a wide enough area that provided for learning, teaching knowledge and specific skills. Padepokan Pencak Silat Indonesia (PnPSI) is a national and international scale of padepokan, which was officially opened by President Soeharto on 20 April 1997.

PnPSI located in Taman Mini Indonesia Indah with total approximately 5.2 hectares of land area. The total area of the building is 8,700 m2 meanwhile the total area of the verandas is about 5,000 m2. PnPSI has many function that basically and mostly are all about anything relating with the activity of Pencak Silat.

Pencak Silat in the Eyes of the World 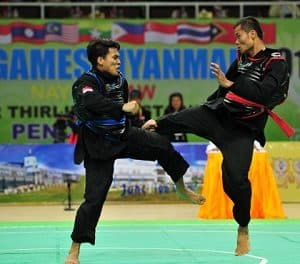 Pencak Silat has become the well-known sports competitions under the control and regulation of Persilat (Persekutuan Pencak Silat Antara Bangsa, or The International Pencak Silat Federation). In 1987, Pencak Silat was first introduced and competed in the 14th Southeast Asian Games (SEA Games) in Jakarta.

Their efforts pay off when the first Pencak Silat World Championship outside of Asia is being held in Vienna, Austria, in 1986. In 2002, for the very first time, Pencak Silat was introduced as part of the show program at the Asian Games in Busan, South Korea.

With so many potential on developing Pencak Silat to the face of world, it won’t be a surprise if Pencak Silat soon will be as well-known as Taekwondo or Karate.  Not only in Asian, but also in Europe.

Daily Phrases in Indonesia – Most Common and Useful

Indonesian Army Strength – Duties and Achievements in the World