Bornean Bay Cats are also called Borneo Cats. In English, it is known as Borneo Bay Cat, in Malaysia the animals that also inhabit Sarawak and Sabah are known as Red Cats. While in Latin it’s referred to as Pardofelis Badia, which is synonymous with Catopuma Badia and Felis Badia. This cat is one of the endemic species of Borneo island.

There is not much research dedicated to uncovering the red cat information about its behavior, distribution and to its elusive nature that still requires a series of in-depth research that until now captivated the scientists.

It is estimated that this endemic cat has been around since 4 million years ago when the island of Borneo is still attached to the Asian mainland. Below we inform you about Bornean Bay Cat Facts which can increase your knowledge more about this unique cat, as follows: 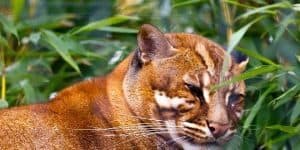 Characteristics of Borneo Bay Cat are having a red-brown fur, although there is a gray variant. The lower part of the body of The Borneo cat is paler than compare to the top. There is a rather light brownish line on the forehead area and cheeks. The ear of this rare cat is black or dark brown, and on a white striped tail with black spots on the tail end.

Alfred Russel Wallace sent the first skin and skulls of a red cat of Sarawak to the British Museum of Natural History in 1855. A total of seven skins appeared during the next decade, but it was not until 1992 that live specimens were trapped in Sarawak – the Indonesian border and taken to the Sarawak Museum, with the status of the animal on the verge of death. 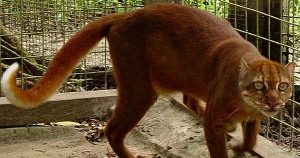 They inhabit dense tropical forests, and have been observed in rocky outcrops of limestone and logged forest, and some close to shore. At least three specimens are found near the river, but this may be due to the ease of collectors rather than evidence of habitat preference. From 2003 to 2005, 15 red cats were recorded in Kalimantan, Sabah, and Sarawak but not in Brunei.

These records consist of a single opportunistic observation. Much scientific proof of red cats existence are recorded near rivers and other water source concluding that may be the habitat for the cats.

Wild Borneo red cats can be the most difficult species to studied in nature. They are closed, hidden, and highly camouflaged animals. However, the knowledge and understanding of the red cat of Borneo get a glimmer of hope thanks to technology, especially cameras and video traps. Camera traps are a very helpful tool for research on animals that are rarely seen. The camera trap is a powerful conservation tool because it can reveal important information while protecting endangered species, such as this red cat. 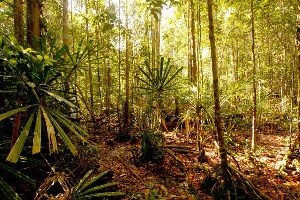 Red cats are animals that are clearly protected in Indonesia. Therefore, if we want to protect this species, then the important thing we must do is to keep the forest as the home of for their life. There are no species of bay cats on display in a zoo in the entire world thus Borneo Bay Cat is categorized under “endangered” conservation status by IUCN Redlist. It is also included in Appendix II of CITES.

In Indonesia and Malaysia, Red Cats is included as protected animals to protect them from extinction. Kalimantan has one of the highest rates of deforestation in the world.

While in the 1980’s forests are still spanning three-quarters of the whole island area, in 2006 only 53% of Kalimantan was still forested. Both forest and land make way for human settlements. Illegal wildlife trade is a widespread practice. The loss of habitat and conversion of forest to palm oil plantation is the biggest threat to the life of animals that is also dubbed the Borneo cats. 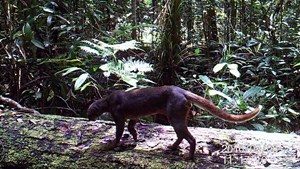 Based on extensive research, Borneo bay cats are connected to Asian golden cat. The tissue and blood samples obtained only in 1992’s from females were brought to the Sarawak Museum. Genetical analyses show the tight relationship of a red cat with the Asian Gold Cat and that both species have been separated when Kalimantan island is still attached to mainland Asia.

Records are obtained after 28 days of research. However, for the survival of the red cats, the researchers deliberately did not write down the coordinates of the location. Moreover, the forest where the cat lives is not a conservation area so hunting can happen anytime and would endanger the animal. 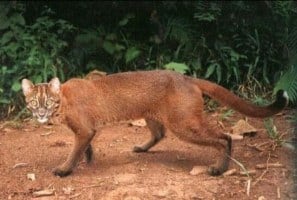 Borneo Bay Cats categorized as nocturnal animals with full activities during the night to hunt birds, mice, monkeys and other mammals. Besides being a skilled hunter, this wild Cat (Catopuma Badia) also consumed the remaining carcasses of animals they found in the forest. It is concluded that Borneo cat might be nocturnal animals and only active at night time.

A camera trap survey from July 2008 to January 2009 in the northwestern part of Sabah Deramakot Forest Reserve in the area of about 112 km yielded one photograph of the red cat in a total sampling attempt of the 1916 night trap. This note extends the reach of the red cat population to the north. 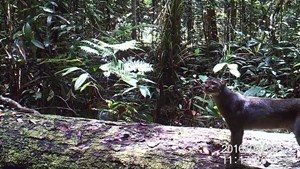 Borneo cat has a long, elongated body with a length of about 56 cm with a tail that is about 36 cm long. Red Cat (Borneo Bay Cat) has a body weight between 2.3 -4.5 kg. The red cat is endemic to Kalimantan and is widely spread out on the island. However, there are two concentrations of habitat that were reported on the island.

This information indicates that they appear in various habitat types, varying from swamp forest, lowland forest to the hill. In the mid-1990s, the most reliable sightings have been reported from the Kapuas Hulu River in West Kalimantan, and in the Gunung Palung National Park.

Beside the common facts above, there are some other borneon bay cat facts which is you may want to know, as follows:

Protecting the forests is not only important for Borneo Bay Cat life and the preservation of the existing biodiversity but also vital for local communities livelihood. Forests provide fresh air, clean water, plenty of fish, and fantastic sources of life with their local culture and wisdom.

So far, the existence of the cat is safe because the monitoring and guarding continue to be done extensively. Minimizing hunting from irresponsible parties while maintaining their natural habitat is mandatory set out by the government. The preservation of original habitat of Borneo Bay Cat needs to be implemented so as to make the cats lives easily and being taken over by human dangerous forest logging. This rare animal offers scientific evidence of the evolution of certain animals to become another species over time. By taking action strongly to protect Borneo Bay Cat then the government will be able to study them further and expand its population.