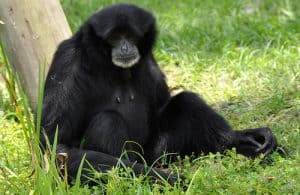 If we are looking at these primates jumping around the trees, we might feel a bit curious because these particular primates are looking like monkey, but doesn’t look like one at the same time.

Well, don’t be too fast to judge because this is definitely no monkey that we are talking about. We are talking about Siamang Gibbon, the largest gibbon ever found. Interested yet? Let’s find out more about this astonishing species of primates!

What is Siamang Gibbon?

Siamangs are large, dark and noisy. I mean, just look at them!

Siamang Gibbon (Symphalangus Syndactylus) is an arboreal black-furred gibbon native to the forests of Thailand, Malaysia and Sumatra. The siamang is the only species in the genus Symphalangus. They can reach 1 m height and weigh up to 14 kg, making them the largest of the gibbons. (Read : Natural Resources of Indonesia –Javan Hawk)

This particular species is distinctive for two reasons. First : the two digits on their foot are partially joined by a membrane (in fact, this is why they are named ‘syndactylus‘ because this means united finger in Ancient Greek). And the second reason is that because they have gular sac, which is a throat pouch that can be inflated to the size of this animal’s head. This throat pouch is what allowing them making these loud and noisy sounds (We will find out more about these calling and sounds later in this article).

The largest species of all 11 gibbons, siamang is actually pretty famous for its appearance. You can find these primates amongst the trees in the areas of Sumatra island, Thailand, and Malaysia. Agile and have a quick move, they also have a long arm to help them hop from tree to tree. Usually, these species are moving with their families, in several meters distance. They are a species of early riser. Usually, they start their activities at dawn and decided to stop even before dusk. They then find the tallest tree they could find and get some rest there.

You can also read:

There are several interesting facts about Siamang Gibbon which you may need to know.  As follows:

The siamangs are divided into two different species (subspecies), which is Sumatra Siamangs and Malaysian Siamangs. Sumatra siamang is known as eating more food than the Malaysian siamang and usually their food is consist of consuming fruits (60% of their foods are fruits). While in other time, they could also consuming some other foods like figs, vines, woody plants, etc. They are also eating some insects sometimes. (Read also : Bali Myna Bird Facts –Merak Bird  )

2. Have Their Unique Characteristics

Having no tail and glossy black fur/hair all over its body, Siamangs are also has white markings on the face, hands and feet. They have strong hands dedicated for grasping branches and very big arms that is larger than their  legs. The arms are used for reaching faraway branches while their forceful legs are used for moving forward. They also have interesting shoulder which helps move at an amazing speed of 56 km per hour.

Other than the largest of all gibbon species, Siamang is also the the loudest gibbon we could find. Having a large gular sac (this is like a pouch in the throat), they are able to make loud calls. In fact, this is how they usually defend its territory : by daily singing rituals. They start their calling in the early morning, and we can hear it less and less at midday. These callings are meant to be pointing at the neighbors, usually for defending their territories. Usually, they are doing this to show other groups that they are locating here in this particular location. This is why there is many calling inside the place where fruit is abundant compared to the no-fruit territory.

Siamang gibbon are monogamous, unlike the majority of the primates. They are forming a lifelong pairs and walk around as families. These families are usually consist of four to six individuals with mother, father, and their children. Usually they have up until 23 hectares home. Their children will then leave the family once they are mature enough (around 6 – 8 years old).

For Siamang gibbons, their activities are usually consist of walking around, resting, grooming, and doing social activities. Their resting could be up to 50% followed by other activities. For this species, grooming is such an important activity and usually perform more by the adult men in the family. Usually, they groom for about 15 minutes a day with the adult male grooming adult female and their children.

Baby siamangs are usually being taken care by their families until they are old enough to forming out their own families (around six until eight years old). The newborn are usually very small and weight no more than six ounches (this is less than a cup of water), and weaned when they are about a year old. Siamangs are offering maternal care a bit longer than other primates, especially when they are more than a year old.

7. Have Their Own Way to Celebrate Their Marriage

For Siamangs pairs (which usually last lifelong span), they have their own way to celebrate their marriage. They usually sing and call with each other to show others that they are a married couple. This is one of the way to show their decision of forming a family. Forming some kind of duet in their singing and calling, they could be louder and even more noisy when they are just getting married. However, once they have become more establish and married for longer time, they will usually decrease the intensity of their sings and calling. (Read : Native Plants of Indonesia )

8. Habitat Loss is the Most Threat for Siamang

A major threat to siamang gibbon’s life is habitat loss. They are loosing their place of live day after day because of human development, plantation, fire, and illegal logging. Since the year of two thousand of two, palm oil plantation have removed a very big area of Siamang’s habitat in the last four decades. 107,000 km per metre oil palms have been planted since the year of 2002, replacing large area of rainforest in Indonesia and Malaysia.

This is not enough. The forest fire that is happening since the last two decades, manage to destroy more than twenty thousand kilometres square forest, once again threatening the place of these species’s life. Illegal logging is another threat, with more and more forests are being opened up ever since the reformation era of 1998. Human development is also make a negative contribution in the live of Siamang gibbon, because the opening of a new road, new village, and new factories are threatening to the habitat of these species.

9. One of Endangered Animals in Indonesia