Home » History » History of Tanah Lot Temple and the Legend 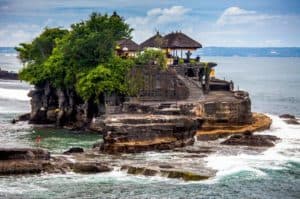 Tanah Lot Temple is a very famous tourist site for viewing sunsets and sunrise in Bali island.The word Tanah means Land and the word Lot means Sea. Therefore, Tanah Lot means Land in the Sea. During high tide, the temple seems as if it floating in the middle of the water surrounding it.

However, during the low tide, people can walk across to the temple. Other than the well-known beauty of the location, there is a fascinating history behind it.

The Tanah Lot Temple is located at Beraban village, Kediri district, Tabanan regency. To be precise, it is situated on the southern coast of Bali island. From Denpasar city, the distance is around 25 kilometres. Another important thing to know about this temple is that it sits on a large coral overlooking the Indian Ocean. This temple is a Hindu temple built to worship God in His manifestations as the God of the Sea or the God of Baruna. They are worshipped for the salvation and prosperity of the world. Also, for a balanced relationship between the sea and the earth.

The history of Tanah Lot Temple started from the journey of a holy monk named DangHyang Nirartha from Java to Bali island in the 16th century. As additional information, the people also called him as DangHyang Dwijendra or Pedanda Sakti Wawu Rauh. The purpose DangHyang Nirartha’s journey was to spread Hinduism in Bali.

During the journey, DangHyang Nirartha made a stop Rambut Siwi temple again as he had visited it before. Before he continued to head East, he performed a ceremony with the local people called Surya Cewana. After praying and splashing some holy water to the locals, he made his way to the east. He walked along the bay of the beaches on Bali Island. On the journey, the monk was accompanied by some of his loyal followers.

DangHyang Nirartha was mesmerized by the amazing view while walking on the south coast of Bali Island. The monk then thought of the amazing God’s gift of creating this world as wll as all the other creations. A thought came to him and he realized that humans hold the responsibility of taking care for one another and everything that is created in the world. Humans must also be grateful and show it through love for the world.

As the monk ended his long journey, he stopped at a beach with a large coral rock. Additionally, there is also a fresh water spring. The monk gave a name to the coral rock. It was given the name Gili Beo which means “bird island” as the coral resembles the shape of a bird. Also, Gili means small island while Beo means bird.

When the monk was resting, a number of fishermen came because they wanted to meet him. The fishermen brought some gifts for the monk. When the dusk sets in, the fishermen offered the monk their homes.

However, the monk refused their offer because he wanted to spend the night at Gili Beo. The monk wanted to enjoy the fresh air and the beautiful scene for the rest of the night. But, DangHyang Nirartha did teach the fishermen the Hindu religion.

2. The Prescence of DangHyang Niratha

Not everyone was pleased with DangHyang Nirartha’s prescence. At that time, the head of the Beraban village was Bendesa Beraban Sakti. He did not like that the monk was teaching the villagers things that go against his beliefs. He was very angry and called some people to join him to chase away DangHyang Nirartha.

The monk found out about it. With his mystical power, he protected himself against Bendesa Beraban Sakti and his people. He then pushed out Gili Beo closer to the middle of the sea. The monk also created a snake out of a shawl that he was wearing. The snake had the purpose of keeping Gili Beo safe from any evil attacks.

Due to the changing position of Gili Beo, the name was finally changed to Tanah Lot. When Bendesa Beraban Sakti witnessed the monk’s supernatural power, he declared a truce. He decided to be one of the monk’s followers. He participated on spreading the Hindu religion to the villagers. (see also: Buddhism in Indonesia)

For Bendesa Beraban Sakti’s effort and loyalty, the monk awarded him with a keris (a traditional assymetrical dagger used as a weapon or a spiritual object that is said to have a mystical power). The keris was given the name Jaramenara or also called as Ki Baru Gajah. Today, the assymetrical dagger is kept as a holy object at Puri Kediri.

The monk also told the locals to build a temple at Tanah Lot. According to his instict and his supernatural knowledge, he believed that it is a good place to worship God. The temple will have the purpose as the place of worship to God in His manifestation as the God of the Sea. The people will pray to Him for the safety and prosperity of the world. After that, the monk continued on his holy journey. (See also: Christmas in Indonesia)

As mentioned before, there is a fresh water spring at the temple. The location of this spring is thought to be unusual but also phenomenal. The reason for that is because the freshwater spring appears in the temple that is surround by salty sea water. According to the villagers, it is one of the reasons for building the temple at that location. The fresh water spring is seen as holy. Visitors and tourists are allowed to drink or splash the water on their face. It is said that when praying while drinking the water, the prayer will come true.

As for the holy snake that keeps the temple safe, the species is Bungarus candidus. The colour of its body is black and white. It is highly poisonous. The snake will attack anyone with ill intention such as destructing the temple.

The snake stays inside a small cave. Visitors can touch and pet the snake with the accompany of the man taking care of it. The locals believe that by touching the holy snake, any prayers or wishes could come true. Indeed, visiting the Tanah Lot Temple adds to the amazing experience of the Bali island. Knowing the overall history of the temple, makes one appreciate the presence of the temple as well as its purpose even more.

Those are complete explanation about history of Tanah Lot and the legend.