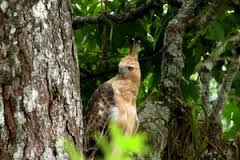 The crest looks stunningly stand out with 2 to 4 feathers with length up to 12 cm. the nape of this bird came in brown yellowish color. Sometimes the nape will look a little bit golden when it’s exposed to the sunlight. The crest of this bird is black with white tip.

Meanwhile, the crown and the stash of this bird are also black as well while the spine and the wings are dark brown. The throat of this bird is a little bit white with black stripes that create sideways pattern.

On the chest area of this bird, there are several black stripes that spread randomly on the top of yellow brownish feathers that look a little bit pale. This pattern will change on the below side of the chest into stripe pattern that is cross ways.

Then it more tight with red brownish to brownish color on the top of pale whiter shade of feathers that cover belly and legs. The feathers on the legs cover the legs until near the base of the fingers of this bird.

The tail of Javan Hawk Eagle is brownish with four dark stripes that are cross ways with broad pattern which are clearly visible on the bottom side. The tip of the tail came with white stripes that are not thick. The female of this bird has same color pattern with the male and sometimes the size of the female can be a little bit bigger than the male.

The eyes of Javan Hawk Eagle have yellow or brownish iris. The beak of this bird is a little bit black while the part on the base of the beak came in yellowish color. The fingers of this bird are yellowish. The young birds of this species came with light brown head, neck, and the bottom side of the body. Their body doesn’t have any stripes or strokes.

When this bird flies, it will look quite similar to Changeable Hawk Eagle (Nisaetus cirrhatus) with bright posture. However, the Javan Hawk Eagle will look a little bit brownish with belly that looks a little bit darker.

These days, the distribution of this bird is only limited on areas with primary forest and areas with hills and forests, especially on areas that became transition between lowland and mountains area. Most of Javan Hawk Eagle can be found at least on the half of southern hemisphere of Java Island. It seems that this type of bird live specifically on hillside areas.

Even though there are eagles that are found suing secondary forest as their hunting ground and nesting area, the location of the forest is usually not too far from wider primary forest.

This bird of prey hunts from tall trees in the forest that is being used as its location for perching. This bird will attack various preys sprightly and dexterously. The animals that became prey of this bird usually hide on the tree’s branches.

Some of them are also located on the ground such as several types of reptile, smaller birds such as Black-Naped Fruit Doves, Green Pigeon, or chicken. This bird will also prey small sized to medium sized mammals such as Treeshrew, squirrel, Flying Foxes, Asian Palm Civet, even to monkey’s baby.

In its habitat, Javan Hawk Eagle is considered as the peak of food chain. This type of eagle also plays important role in maintaining the population of animals that became its prey such as snakes and rats so that the population explosion of these animals will not occur.

The laying period of this bird is recorded starts from January to June. The nest of this bird is made of the stack of twigs with leaves that are arranged to form high structure. The nest is usually built on tree’s branch about 20 to 30 meters above the ground.

The amount of egg that is laid by this bird is usually just one and it will be brooded for at least 47 days. The tree that is chosen by Javan Hawk Eagle as its nest is usually the type of tall tree on forest such as:

The nest of this bird is not always located far into the forest. There are also nests that are found just 200 to 300 meters from recreation areas.

In its habitat, the distribution of Javan Hawk Eagle is very rare. Even though the habitat of this bird is very vast, the amount of the birds that live on that area is just about 137 to 188 pairs of birds. It is estimated that the amount is only about 600 to 1,000 birds. This small population faces the great threat to its survival due to the loss of habitat and exploitation.

Illegal logging and forest conversion to farming land cause the decrease of primary forest in Java. Besides, this type of eagle is kept hunted by human to be sold in black market for domestication. Due to its rarity, keeping this type of bird as pet seems like something that can boost the pride of its owner. As the result, the price of Javan Hawk Eagle became very high in the black market.

As human, we must protected our animals especially if they were classified as endangered animals. Thus, they also help us protected the stabilization of our earth and those natural resources which benefit for us.

Top 20 Misunderstanding of Culture in Indonesia – Strategies to Prevent