Like you all know already, Indonesia is indeed one rich country. It has so many speclities in the way of culture, natural attractions, delicious traditional foods, and many more. And if we talking about the culture, Indonesia jas some kinds of it like the dances, the masks, musical instruments, and also not forgetting the puppet. And now, in this article we want to tell you about the last one. (See also : Balinese Puppets)

Puppet. Puppets in Indonesia used for so many different purposes. It can be used as a main attractions of a culture, or maybe to be danced in some ceremonies. But mainly the masks will be introduced to the tourists as one of the Indonesian heritages. Talking about kind of it, there are two main types of the Puppet.

Those two types or kinds of the puppet is the Wayang Kulit (The Leather Puppet) or Wayang Golek (Wooden Puppet). Both of them have different form from each other. But the things is, Wayang Golek is the thing that also being developed in Bali, in such a large scale. And this day, we want to tell you about the Balinese Woodedn Puppets or The Wayang Golek of Bali. So here are the facts, the complete ones about that very Puppet in Bali, let’s start with its history. (Read also : Indonesian Traditional Puppets)

Talking about the history of the Wooden Puppets in Bali, it all began in the land of Java, where the first Wooden Puppet was created. These Puppets were created in the north Area of Java, in the 17 century. There was the Demak Kingdom, an Islam Kingdom that standing n that very area. In the area, there was one of the 9 Sunans, called Sunan Kudus. He used this type of entertainment to of course in order to entertain the people of Demak and also implementing the Islam region in there. He basically used the Puppet to spread the religion of Islam to all the people of Java, especially for the Demak area first. Firstly, all the dialogues in the Wooden Puppets or Wayang Golek used the Javanese language, but it changed to Sundanese when expanding to the West Java area during the rise of Mataram Kingdom in 17th century.

Well, the story of the Wooden Puppets doesn’t change. The Dalang or Puppet Masters usually use the story of Mahabharata or Ramayana, where all famous characters were born from there. Also, from the original Wooden Puppets, there was another development in so many areas, making it divided to some different types. And after that, in the century of 19, the Wooden Puppets finally got its show as one of the Indonesian cultures. It’s shown in many theaters in Indonesia and reaches the its highest popularity during uear 1920 when The Wooden Puppets bring another accompanyments, some womens called Sinden. The additional Sindens making the show more attractive and entertaining. Especially the Sindends sing so well.

For the types of the Balinese Wooden Puppets or Wayang Golek, we already told some of them in the explanations above, but we will tell you once again about this interesting fact.  There are two actual types of it, consist of Wayang Purwa and Wayang Papak Cepak. Both of them use the different story and different characters. 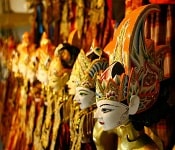 This version of Wayang Golek is using the story of what people in this age now, the story of Mahabharata and also Ramayana. Also teh most famous one beside the other version, because the audience always be served with this kind of story from years. Also, we can guess from the story that the characters that will be used are from those very story. The story is well lined and also must be performed good by the Dalang. With the flow of teh stoyr that rich and also colourful, the audience will not get bored so easily with this performance. And after this one, we will switch to the other Wayang, called Wayang Pepek Cepak. 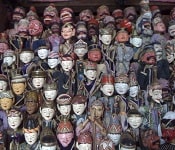 And then in the old days, there was this kind of Wayang Golek that mainly tell us about the life in society and the problems in the country, and also other things. This kind of version in these days will be only performed during some of the small shows off air. With the variative characters, youc an even create your own story with it. First thing first, you can buy the proper Wayang Goleks for your story, that has the odd, brave, funny, and also evil characters. And then you can perform your own story to your own audience near you, which is your own family. This can be a really great thing to tighten the bond between family members, and making your days more colourful.

Anyway, for you who want to get some of the Wayang Goleks, either from Purwa or Cepak, you can get one esily online. The price is also ranging from the least of 200 hundred thousand rupiahs, to the most epic ones like in the story of Mahabharata for like 600 hundred thousands or more. Don’t worry about the quality, the makers always craft them real good, even for shipping to another country.

The Process of Making Traditional Wooden Puppets of Bali

Talking about the making process, we will go through some of the hardest wood cratf to make one wonderful piece of Wooden Puppets. That’s why the price is so high for a single puppet. The process including carving some parts of the body like the face with high detail, making the body by carving it, and then combining them both with a proper clothing.

First thing first you should do is preparing some stuff, like the knives. One will prepare some kinds of knive to make the work easier. And then preparing the thick wood to make it. Walking to the first step, the maker should imagine the face of the character. Then imagining the eyes, nose, lips and more detailed aspects to the face. One must carve this face properly to make the proper character. It’s the hardest process of all.

Then, after finishing the face with some paints, the maker then build the body. The important parts of the body are the arms, and the upper body. After done making it and placing a hole in the middle of each of them, it’s time connecting the body and the head with some strings. After connected, the maker only need to add a stick in the midle of the body called sampeurit, as a tool to move the head. And then two little sticks more to the hands for the character to able to do some gerstures.

And in the last step, the only thing to do here is to make a clothing to the character. It always based on character. In the character of the story of Mahabharata, the characters will having much detailed clothing. And for the body down, to cover the hand of the puppet master, the maker will add the batik cloth just under the body.

The Wooden Puppets, especially in Bali is being developed until now. With some more characters, that of course vased on the reailty that occurs in the country. There are politicians, entertainers, and the other interesting characters that can be found. The variants are making the story more rich and also funnier, but of course, by not offensing any one.

So those are some facts about the famous Balinese Wooden Puppets. Remember, this one is one of our heritages that we must keep forever in our life. Any claim for another country should be blocked by our development of it. And to make it our own, we must protect it by keep developing these Wooden Puppets or even promoting them to the other countries as one of the Indonesian unique things.