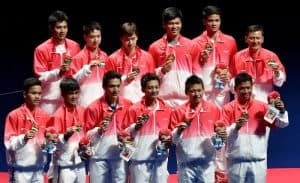 Badminton is a popular game in Indonesia. This game is very easy to play. Because we only have to hit the shuttlecock and drop it into our rival area to get a poin. You can play this game one on one or maybe in a team. Every team consist with two womans, two mans, or mixed. The stuffs that you need are a racket and shuttlecock. Badminton is not being prevalent for Indonesian.

Further Indonesia has many popular athletes. For example Taufik Hidayat and Susi Susanti. These two are so popular in their era and became trending topic in a decades ago. Sadly, they are retired.

If we make comparism, Indonesia maybe bad-known in sports like football or basketball. But not in badminton. Because most of the player well-known abroad. The player also brought medals from the Olympic. Included gold medal.

Badminton already exist and develope 2.000 years ago in Egypt. Not only in Egypt, badminton also existed in London. In the middle of era in London, shuttlecock is the well-known game. This game is very popular.  Additionally, in 1854, there is a cartoon that show how to play badminton. The rule while playing badminton shown in real terms. In case, we must keep the shuttlecock in the air while playing. And when we fall the shuttlecock into the rival area, we made a score.

When England ruled Tiongkok (well-known as China), badminton unveil. England succeed to unveil badminton and the game become popular in Tiongkok. Badminton played with shuttlecock and with no racket. To play badminton, people use their foot to manipulate the racket. Kinda odd, but people like it very much. They play badminton often.

In Indonesia, badminton also well-known as “bulu tangkis”. The badminton developed until now because badminton has scent Indonesia in the world. If badminton wasn’t exist, then there is no sport branch would be scent Indonesia. Badminton was exist for the first time in Barcelona when its an Olympic in 1992. In 1992, Indonesia and South Korea has reached two gold medals. In case, this is an improvement that Indonesia was able to compete in sports.

Around 1950, badminton has played in National level. Because its National level, its played in the whole cities in Indonesia, especially Kalimantan, Sulawesi, Java, and Sumatera. Those cities basically known as an island in Indonesia. Particularly, those islands been more participated in badminton development. Due that time, competition for each area started. And its firmly became a competition in PON (Pekan Olahraga Nasional) in Surakarta.

Badminton is not a Traditional Indonesian Games. Because its played globally in the tournament. There are 3 tournaments well-known in badminton, such:

The title “Thomas Cup” came from ex IBF president named Sir George Alan Thomas. Thomas Cup is a championship number for men’s team. This cup would be held once in two years. The oldest championship held by IBF in 1948 – 1949. In that year, badminton championship followed by 10 countries. Such a Canada, England, France, Bosnia, USA, Ireland, Malaysia, Sweden, India, and Denmark.

Throughout the championship, there are only 4 countries who has won the Cup: China, Malaysia, Japan, and Indonesia. But that history record was broken in 2016 when Denmark became a winner for the first time.

Sudirman Cup is an international championship for all of number in badminton. This tournament held once in two years. The first tournament held in 1986 by Indonesia itself. Throughout the history, there only six countries whom succeed reach the semi-final level. The six countries are Indonesia, England, South Korea, China, Denmark, and Thailand.

Name “Sudirman” was taken from late Dick Sudirman. He is well-known as a badminton player and a man who participated while PBSI established. Now, he is called as a “Father of Indonesian Badminton”.

Beside those three, there are the other tournaments in badminton, such:

This tournament basically held by Badminton World Federation (BWF) itself. This tournament started in 1977. But it held once in two years since 1985 – 2005. But it changed and became annually tournament since 2006 – now. Throughout the tournament, Indonesia has won a medal in every number. But not in the woman’s team number. Hopefully in the next tournament, woman’s team could win the medal.

Previously known as Asian Badminton Championship. But it changed in 2007 became Badminton Asia Championships. The tournament only followed by countries in Asia level. This championship started in 1962. And since 1991, this tournament held annually. From the whole medal record, China took plenty parts. Because player from China won medal almost every single year.

Olympic held every four years. Since 1992 until now, Indonesia has won seven gold medals. Recently in 2016 when Tontowi Ahmad and Liliyana Natsir has won the gold medal in Rio de Janiero. This is the only gold medal brought from Olympic in 2016. The mixed team succeed bring back the medal tradition from badminton. This is such an improvement that Indonesia could shine again in badminton. 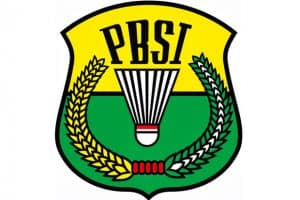 Badminton in Indonesia controlled by the Persatuan Bulutangkis Seluruh Indonesia (PBSI). The name was given also mean for whom would be responsibly to the Badminton game. PBSI formation etablished on May 5th, 1951 in Bandung. The first head of PBSI is A. Rochdi Partaatmadja.

Though established in Bandung, the central office of PBSI based on Jakarta. Before PBSI existed, the badminton orgnanization moved themselves. Like there were an organization in regional level and branch level. When PBSI created, the badminton has a national organization eventually. The main function of PBSI is to unite the whole organization in badminton. Then, there is no gap between every area. Regional, branch, and central level united beneath of PBSI.

The logo of badminton Institution in Indonesia have a meaning. Each color have its own characteristics which different among others. Here the explanation:

Meanwhile, each image there also have their own meaning, as follows:

Li Yongho is the badminton coach in Indonesia. He become a head of badminton about 24 years. But now, his position replace by Xia Xuanze and Zhang Jun. The replacement isn’t really matter. Recently, performing of Indonesia badminton decrease. Unlike many decades ago, when Indonesia succeed to win medals.

This performing rapidly corrected by PBSI. After realize the main problem, PBSI started to monitoring the player in young age. Not only in the central areas but also in the branch. Thus, thew till nutured and trained by proffesional coach to increase their skill while playing. Not only that, PBSI also ask the player  to follow many competition often. These ways automatically enhance their experience. By doing this, hopefully Indonesia could be triumph in badminton world.

There are some awesome achievements from Indonesian Badminton Players. Such as:

So, there are plenty information about badminton in Indonesia. Start from the history, institution, development, and in the new era. Hopefully badminton could triumph as many years ago. Especially in the next tournament.