Indonesia Raya is the national anthem of Indonesia. The song was first introduced by the composer , Wage Rudolf Soepratman , on 28 October 1928 during the Youth Congress in Batavia or Jakarta.

This song marks the birth of the nationalism movement across Indonesia and then supported the idea of one “Indonesia” as successor to the Dutch East Indies , rather than divided into several colonies.

Indonesia Raya was chosen as the national anthem when Indonesia proclaimed its independence on 17th of August , 1945 . Indonesia Raya was played at the flag ceremony. Indonesian flag was raised solemnly and the movement was arranged so that the flag reached the top of the flag pole when the song ended. This flag raising ceremony is then held every year on August 17 to commemorate Indonesia’s Independence Day . The ceremony is chaired by the President of Indonesia and held in Istana Merdeka (Merdeka Palace) annually.

As already mentioned above, Indonesia Raya was created by Wage Rudolf Soepratmatn. W.R Soepratman’s father who named Senen was a sergeant in Battalion VIII. Soepratman had a total of 6 siblings,with one brother and five sister. One of them was named Roekijem. In 1914, Soepratman joined Roekijem to Makassar. In Makassar he was educated and financed by Roekijem’s husband, Willem Van Eldik.

While living in Makassar, Soepratman got a music lesson from his brother-in-law Willem Van Eldik, then made him good at playing violin and also able to compose songs. While living in Jakarta, he once read an essay in Timbul magazine. The author of the article challenged Indonesian music experts to create the national anthem.

The Birth of Indonesia Raya

Soepratman felt much challenged, and then he started composing songs. In 1924 he successfully composed Indonesia Raya song, at that time he was in Bandung and at the age of 21 years.

In October 1928, a Youth Congress II was held in Jakarta. The Congress gave birth to the Youth Pledge which consisted of some promises from youth people to stay united as an Indonesian. On the night of the closing of the congress, on October 28, 1928, Soepratman played his instrumental song in front of the general participants.

He played only the instrument of the song with a violin at Soegondo’s suggestion regarding the conditions and circumstances of the time. It was at that time when Indonesia Raya’s first song was publicly performed. Everyone who attended the congress was amazed to hear it. Quickly the song became famous among national movements. If the political parties held a congress, then the song Indonesia Raya was always sung. The song is a manifestation of a unity sense and a strong will for Indonesia’s independence. 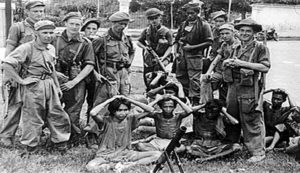 The Dutch, who were frightened by the concept of Indonesian nationality, and armed with the politics of divide et impera (politics tactic to disunite Indonesian) preferred to call Indonesian as the Javanese, the Sundanese, or the Sumatran people, and also forbid the use of the word “Merdeka, Merdeka!” that meant Independence.

Nevertheless, the youth did not flinch. They follow the song by saying “Your Majesty, Your Majesty!”, Not “Merdeka, Merdeka!” on the song’s chorus.

As a result of creating Indonesia Raya song, WR Soepratman was always hunted by the Dutch East Indies police and became ill when he was in Surabaya. Due to his latest song “Sunrise” at the beginning of August 1938, he was arrested while broadcasting the song in Nirom , Embong Malang Street, Surabaya and then prisoned in Kalisosok Surabaya prison. He died on August 17, 1938 because of his illness. Unfortunately, WR Soepratman as the creator of the song did not have time to enjoy his life in an atmosphere of independence where the song was used as a national song. 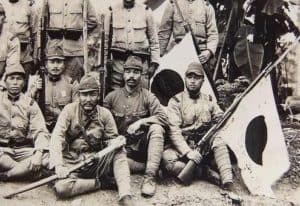 In the era of Japanese rule, the song of Indonesia Raya was strictly prohibited to be echoed, whereas Japan had broadcasted this song via Radio Japan to take the hearts of the people of Indonesia before.
The ban was not long, after the Japanese position was unstable, the Japanese formed the National Anthem committee in 1944.

You may also check :

After Japan lifted their foot from Indonesia, on August 17, 1945, Indonesia Raya song was set as the national anthem. However, until August 1948 there was no uniformity, until the Indonesia Raya committee established on November 16th, 1948 which was chaired by Ir. Soekarno with members such as Koesbini and C. Simandjuntak. And on 26 June 1958, the government released a regulation number 44/1958 about Indonesia Raya songs and there were six special chapters that regulate the order, to the diversity of tones, rhythms, lyrics and compositions. After that, the regulation was completed with Indonesian Law number. 24 Year 2009 About Flag, Language and Country Emblem and Indonesian National Anthem on Chapter V.

You may also read: 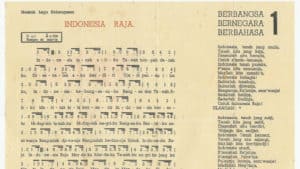 From the composition of the lyrics, it is a 14-line sonnet or poem consisting of an octave (or two strong ones) and one sextet. The use of this form is seen as “ahead of the times” (avant garde), although the sonnet itself has been popular in Europe since the Renaissance era.

Apparently the use of the sonnet inspired because five years after it was echoed, the new artists began to use sonnet as a form of poetic expression.

The lyrics of Indonesia Raya are a series of shawls or traditional poetry, resembling the way of Master Walmiki when writing Ramayana epics. With the power of its lyrics, Indonesia Raya soon became a powerful to unity of the nation, and with increasingly prohibited by the Dutch, it became stronger and also became the encouragement and unite of Indonesian nation.

You may also read : Flag of Indonesia – Scouting in Indonesia

Cornel Simanjuntak in Arena magazine had written that there the tone ranges in Indonesia Raya are generally too large for songs intended for many people. Compared to other national songs that generally lasted half a minute and even there is only 19 seconds, Indonesia Raya is much longer.

Musically, this song had been glorified precisely by a Dutchman named Jos Cleber who died in 1999. After receiving a request from the Head Chief of Indonesian Republic Radio of Jakarta, Jusuf Ronodipuro in 1950, Jos Cleber also arranged a new arrangement for Indonesia Raya. The perfection was done after receiving some input from President Soekarno. Indonesia Raya became the national of Indonesia with majestic and valiant feeling. The rriginal recording from Jos Cleber that collaborated with Cosmopolitan Jakarta Orchestra then played and re-recorded digitally in Australia in 1997 by Victoria Philharmonic under the direction of Adi MS.